Transnationalism has replaced the comfort zone of a ‘national’ cinema with the continual temporal and spatial redesign of its evolution and current condition, while tracking its provenance has erased hegemonic historical perspectives by revealing that globalization is less a contemporary phenomenon than a longstanding tradition for some and a dark secret for others. The limited and restricted, solipsistic and self-contained idea of the nation-state is indeed a shonky frame that fails to contain the cultural diversity of World cinema, whose fragmentation within what passes for nation-states has resulted in attention being paid to regional, local and community-based filmmaking too.

The study of World cinema has turned a corner. The disintegration of ‘national’ cinemas is not only a matter of definition but relates to the impact of the digital revolution too. The process and format of filmmaking have been transformed in the last twenty years, radically altering the way that films are produced, distributed, received and consumed but not, until recently at least, how they are approached by academia, which is another challenge accepted by The Routledge Companion to World Cinema.

Industrial models and strategies such as staggered release patterns and first- and second-run cinemas have been eradicated as blanket release across several media becomes the commercial norm. Screen conversions from 35mm to digital expanded globally from 16,000 in 2009 to 36,000 in 2010 and by 2012 the changeover was complete. Digital films lack scratches and splices but their projection offers a uniform luminosity that enforces a bland, seamless, grainfree homogeneity that is fine for superheroes but less fitting for reality. Moreover, films that play multiplexes are generally more expensive to make, in part because their budgets are doubled by marketing. On a smaller scale, however, new screen technologies have enabled a plethora of documentaries as well as intimate, even experimental works to achieve quite sophisticated levels of post-production.

Breaking the celluloid frame into pixels has not only dissolved previous territorial demarcations of World cinema but the traditions and conventions of film production, distribution and consumption too. The digital revolution could be said to have freed filmmakers from the need to raise huge budgets and heft heavy equipment, but the barrier of white noise facing films without corporate backing on their release has also resulted in numerous films going unseen or even being lost.

The chapter we commissioned from Lydia Papadimitrou was entitled ‘At the Edges of The European Union’ and needed to take all this into account and provide some answers too. Lydia  is Senior Lecturer in Film Studies at Liverpool John Moores University. Her monograph The Greek Film Musical: A Critical and Cultural History (2006) has been translated into Greek (2009). She is the Principal Editor of the new Journal of Greek Media and Culture (Intellect), has co-edited (with Yannis Tzioumakis) the collection of essays Greek Cinema: Texts, Forms and Identities (2011) and has published articles and reviews in New Review of Film and Television Studies, Screen, NECSUS, Filmicon, Sight and Sound and Senses of Cinema as well as contributing chapters to several edited collections and co-editing a special issue of Interactions (3.2) on Contemporary Greek culture (2012). The subject of European cinema is massive, of course, so when the superb chapter was submitted we found it had budded a subtitle too: ‘Cinema at the Edges of the European Union: New Dynamics in the South and the East.’

This was the original abstract.

At the Edges of the European Union 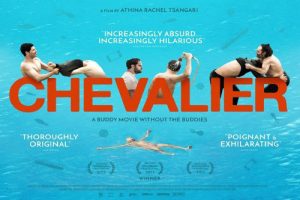 The chapter will explore the different meanings of the ‘edges’ of the European Union in the mid 2010s and exemplify each definition through a sample of carefully selected case studies. The focus will be three-fold: First, on countries affected by the financial crisis of the late 2000s, with Greek cinema being the main object under consideration. Second, on countries recently included in the EU, that is, Bulgaria, Romania and Croatia. And finally, on countries bordering with the EU but remaining outside it – the Ukraine being the main case study here. The fragility but also the persistence of the European ideal as evidenced through cinematic texts and practices from countries at the ‘edges’ of the EU will be the main object of examination in this chapter.