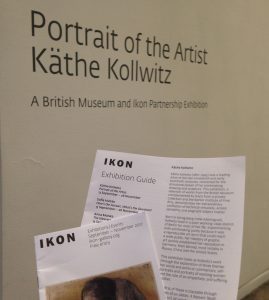 The exhibition of Käthe Kollwitz’s etchings is haunting, displaying her preoccupation with themes of poverty, grief and death. Anguish and trauma are suggested in the violent scratches conveying the faces and hands of two parents in Unemployment (1909), differing dramatically from the softly rendered face of the child lying asleep in its mother’s arms. The striking contrast of light and dark in Battlefield (1907) conveys Kollwitz’s talent for exploiting the qualities of the etching technique. This work tragically forebodes the death of the artist’s son in World War I, which caused the themes of death and guilt in her art to become increasingly prevalent.

Sofia Hultén’s exhibition included a variety of engaging works including films and installations of various shapes and sizes. She works with unwanted materials found on the streets and looks at the importance of time and human involvement in everyday processes. A theme of repetition is evident in her work as in both Reality Plural (2017) and Speculative Fiction (2006) the same object is displayed in different ways. Her film Nonsequences (2013) shows actions and objects repeated and the film is played on a loop. In this exhibition the viewer is provided with answers in the works and is prompted to come up with corresponding questions.

Ikon Gallery have organised a prolific Events Programme to accompany these exhibitions. Events include:

Both exhibitions are open until 26th November 2017.