Regular readers of this blog (hello? echo!) will recall that prior to embarking upon The Routledge Companion to World Cinema Paul Cooke and I set about Screening European Heritage too. This was one of the main outputs of the AHRC funded project that we ran on which Paul was PI (private investigator), I was CI (central intelligence) and Axel Bangert was RA (really amazing). There was a symposium and a conference too, a report to the House of Lords, a series of video essays and a 35 minute documentary entitled Basque Heritage Cinema; but the good old edited book, doyen of traditional academia, is almost out and it’s a chance to compare the two projects.

Here’s the cover, which shows none of the blood, sweat, tears and coffee cup stains within. 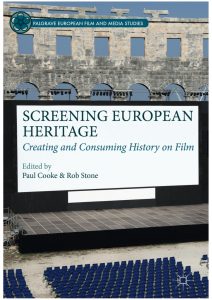 Looks harmless, doesn’t it? Well, the secret of editing is that the editors should bear the scars, not the book itself, and this one turned out just fine.

The idea was that this book would provide a unique examination of the way Europe’s past is represented on contemporary screens and what this says about contemporary cultural attitudes to history. How do historical dramas come to TV and cinema screens across Europe? How is this shaped by the policies and practices of cultural institutions, from media funding boards to tourist agencies and heritage sites? Who watches these productions and how are they consumed in cinemas, on TV and online? These are just some of the questions this volume seeks to answer. From The Lives of Others (in Paul’s chapter) to Game of Thrones (in mine), historical dramas are a particularly visible part of mainstream European film production, often generating major national debates on the role of the past in contemporary national identity construction.

We brought in some brilliant scholars to help us answer those questions and more. Here is the list of contents and contributors.

Section One: Contexts of Production

The Politics and Sociology of Screening the Past: A National and Transnational Perspective … Ib Bondebjerg

Towards World Heritage Cinema (Starting from the Negative) … Alan O’Leary

Whose Heritage?: Noi credevamo and the National, Regional and Transnational Dynamics of the Risorgimento Film … Alex Marlow-Mann

From ‘English’ Heritage to Transnational Audiences: Fan Perspectives and Practices and Why They Matter … Claire Monk

From ‘Auschwitz-land’ to Banglatown: Heritage Conflicts, Film and the Politics of Place … Paul Cooke

There, that’s it.  Three years worth of hard work in 300 pages. In the immortal words of Barry Manilow:

Who knew that song was actually about editing a book?