The arguments against the cinema as a going concern seem to hold it down while long-form television administers a beating. Why waste your time and money on dreary flab like Batman versus Superman or Superman Lives or Iron Man 3 when Jessica Jones offers intelligent, original, subtle, affecting and exciting drama on tv? Why bother with hackneyed thrillers like Jason Bourne when Mr Robot is in town? The remake of Ben-Hur? No thanks, I’m re-watching the last series of Game of Thrones. The comparisons are many and odious.

Long form television, it seems, can beat the cinema at any genre. Crime thriller? Try The Sopranos, Fargo, The Wire. Intelligent drama? Mad Men, Better Call Saul. The Western? Deadwood (please come back!). It can even invent its unclassifiable own with Sense8, for example, and Girls. But the key thing here, which is often missed, is that a great part of what makes these series great is their cinephilia, their affection for the films that run through their veins. The Sopranos without Scorsese is unthinkable (and incomprehensible) as is The Wire without Sidney Lumet films, Mad Men without Frank Tashlin, Fargo without the Coen Brothers (obviously), Mr Robot without Taxi Driver or Fight Club and Girls without Woody Allen and all those damn Disney princesses.

This all comes into focus with Stranger Things, which references everything from Alien to Videodrome. And I mean everything! Spotting the cinematic asides in this series was:

If you answered 5 you clearly watched and loved it. Welcome to the club. But here’s the thing: what Stranger Things did brilliantly apart from casting its kids and giving us back Winona Ryder was to proudly proclaim its affection for films, their influence upon us, the way they wallpaper our memories and inform our ideas and ideals of childhood, friendship, family, love and, of course, the films themselves. 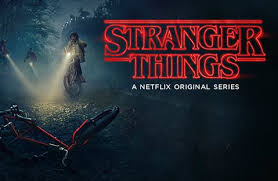 Stranger Things not only loves movies, it respects them too. And it’s made with love and respect for people who love and respect them too. It’s not just about remembering where you were when you first saw E.T., but about recalling who you were when you saw it and comparing it with who you are when watching Stranger Things. It’s about the difference between the child of the ‘80s and the adult of the 20-teens (is that what you kids are calling them now?) and whether us grown-ups still care and believe.

Stranger Things is also a portal to the pictures in the line of the ‘if you liked this, then you’ll love this’ section on blessed Netflix. The Sopranos does this with The Godfather and Goodfellas, and Fargo does this too, but only with the films of the Coen brothers, which is great if you love Miller’s Crossing, Raising Arizona and Blood Simple, like I do. And if you liked Stranger Things then you’ll love Firestarter, The Thing, Stand By Me, Poltergeist, A Nightmare on Elm Street, Jaws, The Fog, The Empire Strikes Back and season 2 of Stranger Things.

Separating films from tv is stupid and pointless, as many of the contributors to The Routledge Companion to World Cinema point out. So can we stop trying to start a fight between two friends? Stranger Things has happened.