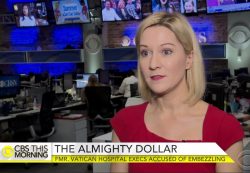 Candida Moss, Edward Cadbury Professor of Theology, was interviewed on CBS News on 18 July 2017. On 18 July 2017 the US early morning news programme CBS Morning News reported on a trial in Italy where two ex-Catholic Church officials had to defend themselves against allegations that they diverted almost $500,000 in hospital donations to renovate a … END_OF_DOCUMENT_TOKEN_TO_BE_REPLACED