Cadbury Centre Honorary Fellow Dr Iqtidar Cheema has been recently formally recognised by the State Senate of California for his services to global advocacy of human rights, religious freedom and interfaith. State Senator Bob Wieckowski on behalf of California State Senate confirmed the honour upon Dr Cheema, who is currently a member of the UN Advisory Committee and has testified on various occasions at the United States Congress as an expert witness.  Dr Cheema said that he was humbled to receive the award, but he dedicates the honour to the Rohingya of Myanmar, the Yazidi and Christians of Iraq, the Sikh victims of 1984 and other people groups and religious communities who have been persecuted across the world. 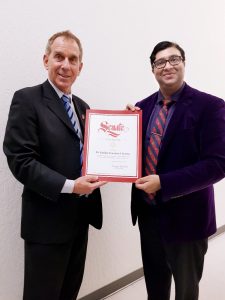