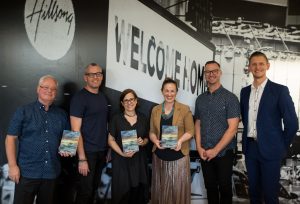 The Sydney launch of the new book The Hillsong Movement Examined, coordinated by Dr Tanya Riches, was a fantastic event at Hillsong Church in Norwest, Sydney on Tuesday 27th February!

The event was addressed by Lee Burns, the Hillsong Executive Vice President, who spoke about the Hillsong Global team’s response to receiving an invitation to be involved in the book, as well as the warm reception of the founder, Brian Houston to this opportunity.

Followed by Dr Mark Hutchinson, his speech aptly noted the geographies of affect … noting that it certainly was not the “right” place in Sydney to launch a scholarly book. But we did! It wasn’t the “right” place to build a church either …

Later, anthropologist Dr Cristina Rocha presented on the Brazilian students of Hillsong College and spoke of the ways in which the community embraces these young people and allows them expression in fashion and technology, as well as exploring their faith.

Last but not least, Dr Dreu Harrison’s chapter addressed the vision statement of the church, presenting it as a “double bind”. However, the question remains; can Hillsong not only use the market, but move beyond it? Are there any areas in which Hillsong is envisioning something less “capitalistic”? And how can we articulate that to the waiting world?

In addition to the Hillsong College staff, Chris Parkes was also present for the event, and was celebrated by all the students and staff for his contribution. 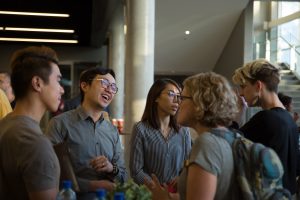