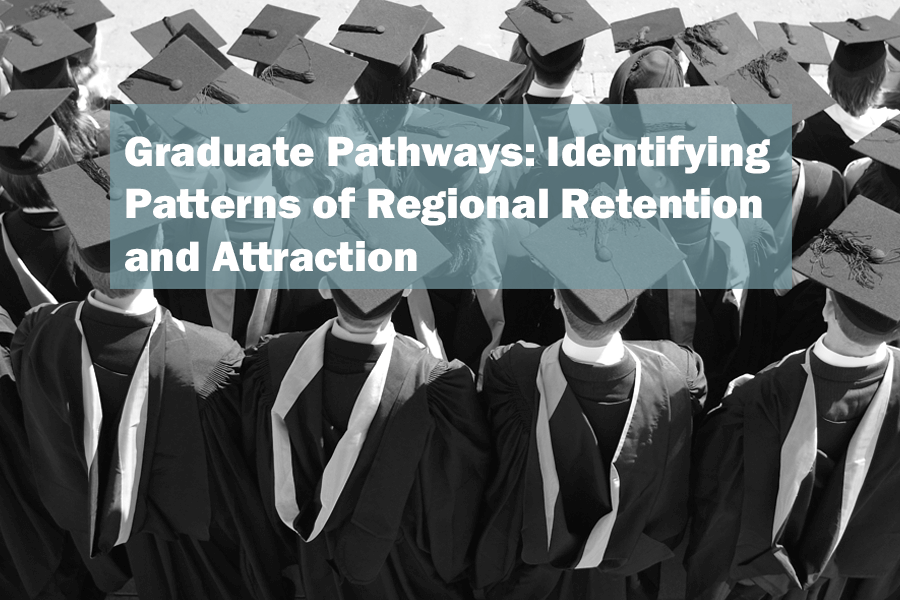 View the report and project page

There has been an upsurge in policy interest in levelling up UK regions and exploring the mechanisms that influence the interregional mobility behaviour of highly educated people. However, graduate mobility is complex and depends on many social, spatial and professional factors. This report utilises the most recent available Graduate Outcomes Survey data for the academic year 2018/19 to shed light on retention/migration patterns of recent graduate workers across the UK regions. The primary objectives are to:

This report complements and expands on earlier WMREDI work on regional brain drain and gain in the UK.

Whilst most university graduates are employed in their region of study 15 months after graduation (UK average retention rate: 58.1%), there are substantial regional differences in the likelihood of staying regionally or relocating for work. Specifically, the graduate retention rates vary from 40.1% in the East Midlands to 88.3% in Northern Ireland, while the attraction rates range from 8.8% in Scotland to 61.9% in the East of England. Of the total 2018/19 graduates across the UK who migrated to another region for work, 32.3% chose London as their employment destination. Although the living costs in the capital are high, the increased availability of well-paid occupations and opportunities for career progression, the high share of skilled workers, transport links and accessibility, other amenities and culture-related factors seem to maximise graduates’ utility and drive their migration/retention behaviour. Proximity to destination regions is another factor that influences graduates’ post-university choices. For instance, of the total number of new workers who graduated from a university in the West Midlands, 5.7% moved to the neighbouring East Midlands for work, 5.0% found a job in the North West and 5.2% in the South West. 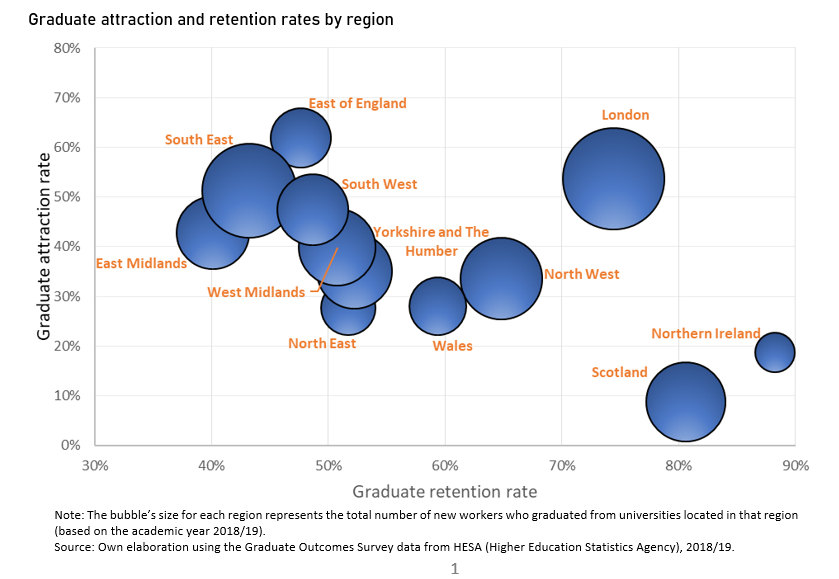 Unsurprisingly, the regional retention rates are substantially lower for younger graduate workers (aged 29 years and under), standing at 55.3% on average compared to 67.0% for those over 30 years. Conversely, the regional attraction rates are more pronounced among the younger graduate workers in England, ranging from 29.3% in the North East to 66.3% in the East of England. The labour-motivated movements of young graduates should be linked to their willingness to pursue transregional opportunities and find their job match at the beginning of their careers. Moreover, older graduates are more likely to have family commitments, which may affect their migration decisions. Another possible explanation for the above figures is that older graduates are more likely to have completed a postgraduate course, considering that the probability of staying local is higher for new workers with a postgraduate qualification than those holding only a bachelor’s degree. This implies that older graduates’ choices regarding the region of study are strongly correlated with their later residential and employment decisions.

There are also considerable ethnic differences in the mobility patterns among new graduate workers. On average, Bangladeshi (73.5%) and Pakistani (67.6%) graduates see the highest retention rates in the UK regions, whereas Indian (50.6%) and Chinese (51.6%) new workers are the least likely to be employed in their region of study after graduation. On the other hand, the average UK attraction rates vary from 26.5% for Bangladeshi graduates to 49.4% for the Indian group. The differing patterns in the interregional migration behaviour of ethnic groups may be due to various factors. These include ethnic differences in academic performance and demographic profiles, the occupational segregation of specific ethnic minorities, their high concentration to some regions such as London and the Midlands, their lower average socio-economic background, differences in household formation and sensitivity to long-distance moves. 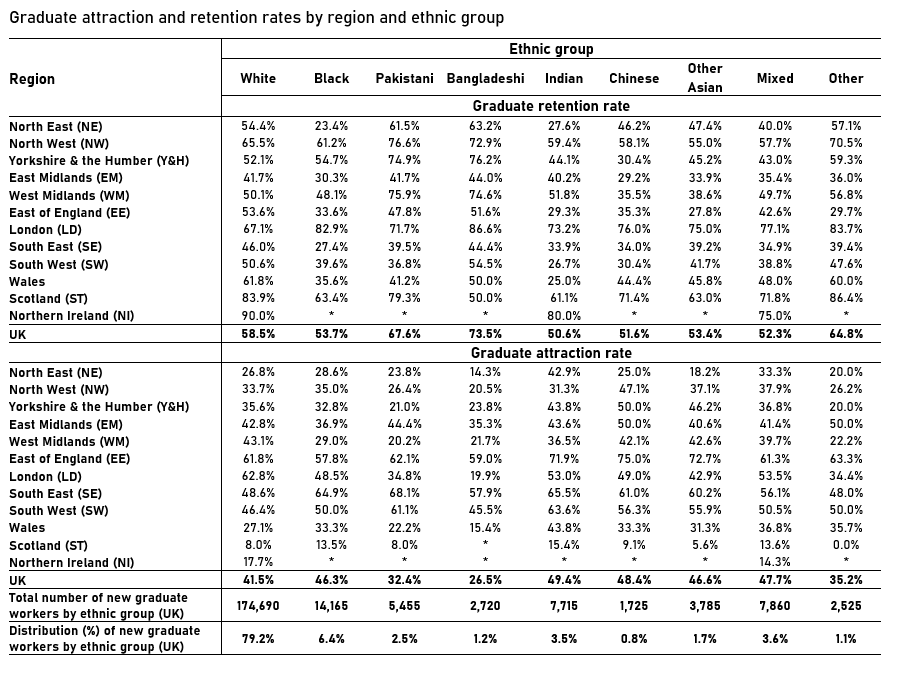 Moreover, new workers who graduated from the prestigious Russell Group (RG) universities are remarkably less likely to be employed in their region of study fifteen months after completing their course (49.9%) compared to those who obtained a degree from other institutions (61.2%). On the contrary, the attraction rates are higher among the RG university graduates (UK average: 50.1% versus 38.8%). These findings suggest that students attending elite universities may receive more offers for work from across the UK regions. Selective institutions may have strategies in place that improve their students’ productivity through collaborations with partner businesses. In addition, employers likely perceive a degree from a well-regarded institution as a signalling tool of graduates’ quality and skills, particularly at the beginning of their career. 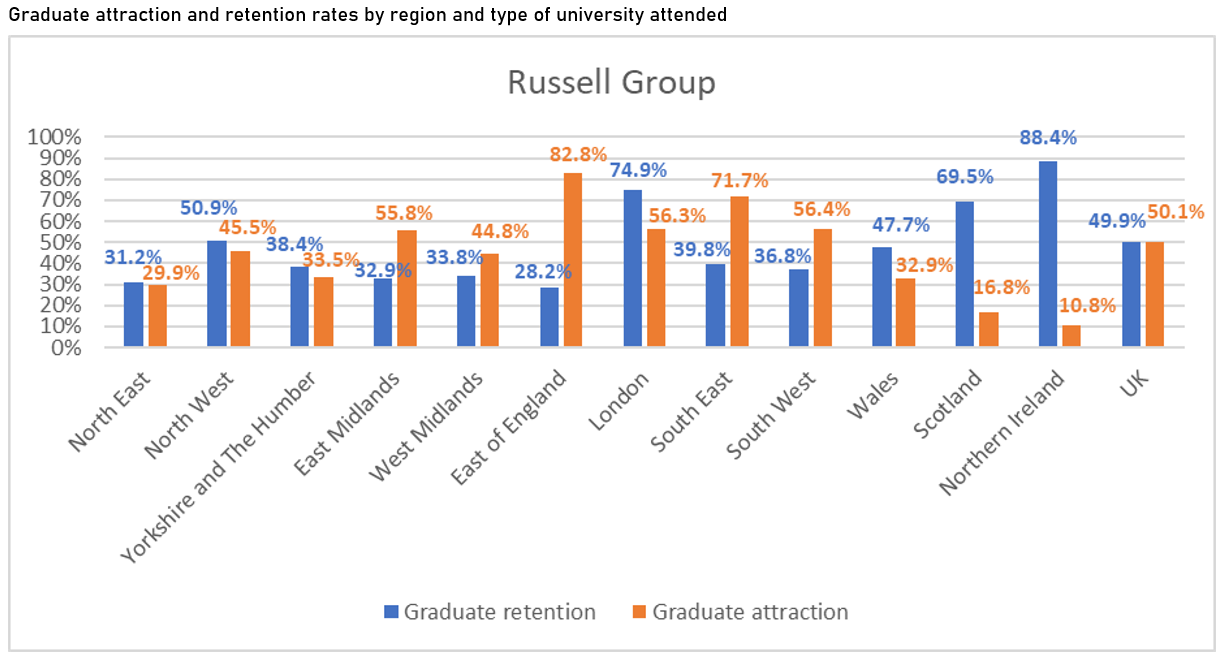 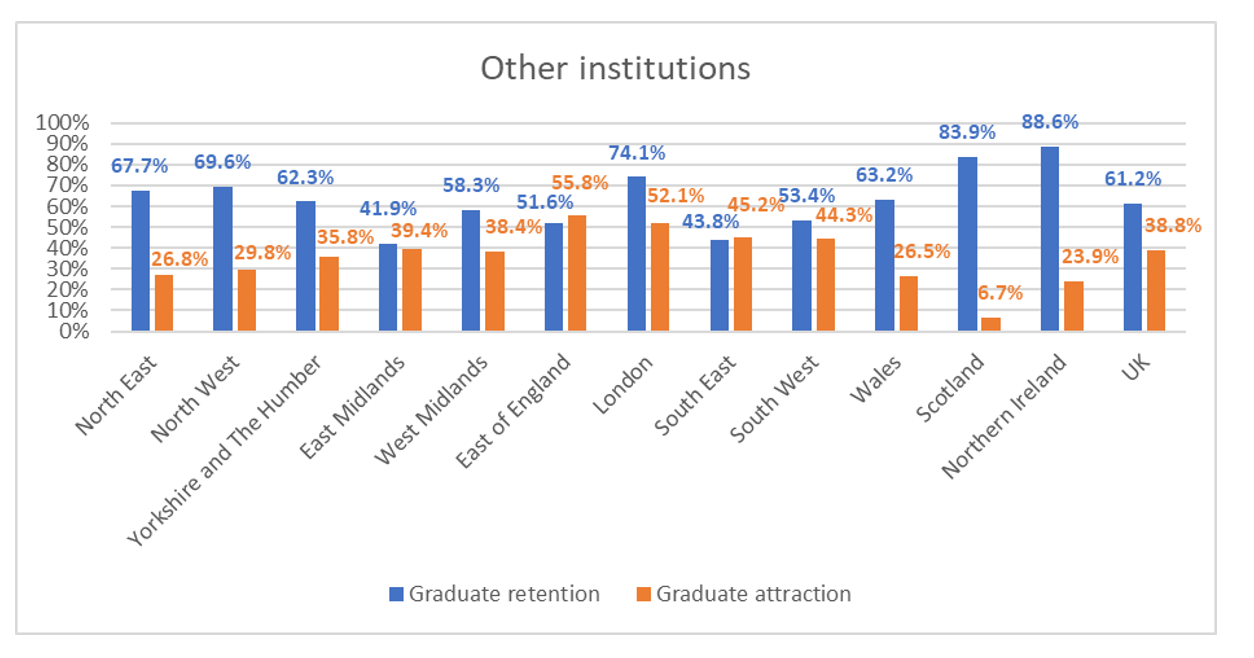 Furthermore, it appears that the degree class is another reflection of graduates’ ability, as students who perform well at university are more likely than others to relocate for work when they finish their course. In England, the retention rates of graduates earning a “good” degree (that is, first-class or upper-second class honours) range from 33.2% in the East Midlands to 74.0% in London, with the UK average standing at 52.9%. Conversely, the attraction rates are higher among the good-degree holders (UK average: 47.1%) than those with a lower degree class (40.8%).

This report also reveals that occupational and sectoral specialisation is another parameter that influences graduates’ post-university location, as the attraction/retention rates and the distribution of new workers vary significantly across industries and occupations. For instance, the “public administration, education and health” sectors demonstrate the highest graduate retention rate (64.9%), whereas the attraction rates are more prominent amongst the graduates employed in the “manufacturing” (51.5%) and “transport & communication” (50.7%) industries.

Finally, it is not surprising that 76.3% of university graduates are employed in high-skilled occupations (managerial and professional jobs) 15 months after completing higher education. New workers holding these positions are less likely than others to stay in their region of study after finishing their course, suggesting that graduates with a more advanced skillset are sufficiently flexible in pursuing career opportunities in other regions.

Policies aiming to create new high-skilled jobs are crucial for attracting and retaining talent to an area. In this context, boosting innovation and R&D investments can benefit the UK regions by increasing the average productivity of an area’s workforce and developing agglomeration economies. The UK Government recently announced its target to raise the annual public R&D spending to £22 billion by 2027, thus increasing the total R&D investments (public and private) to 2.4% of the GDP. If R&D expenditure is equitably distributed nationally, it should open up opportunities for the further development of specific sectors and high-level skills (such as STEM-related capabilities) across the UK. Moreover, universities could utilise the knowledge gained from their partnerships with local firms to upgrade their degree programmes and equip their students with the required skillsets, thus enhancing graduates’ employability. Future research could investigate the impact of COVID-19 on the mobility decisions of graduates. The shift to remote or hybrid working is likely to decrease geographical impediments to graduates’ mobility and expand the pool of highly skilled employees available to businesses across the country. Will these patterns result in companies operating in London recruiting more employees outside of the capital, thus further intensifying the competition for highly skilled graduates among businesses based in other regions?

This blog was written by Dr Kostas Kollydas, City-REDI / WMREDI, University of Birmingham.