Alice Pugh takes an in-depth look at the government’s recent mini budget and what it means for people and businesses in the UK. 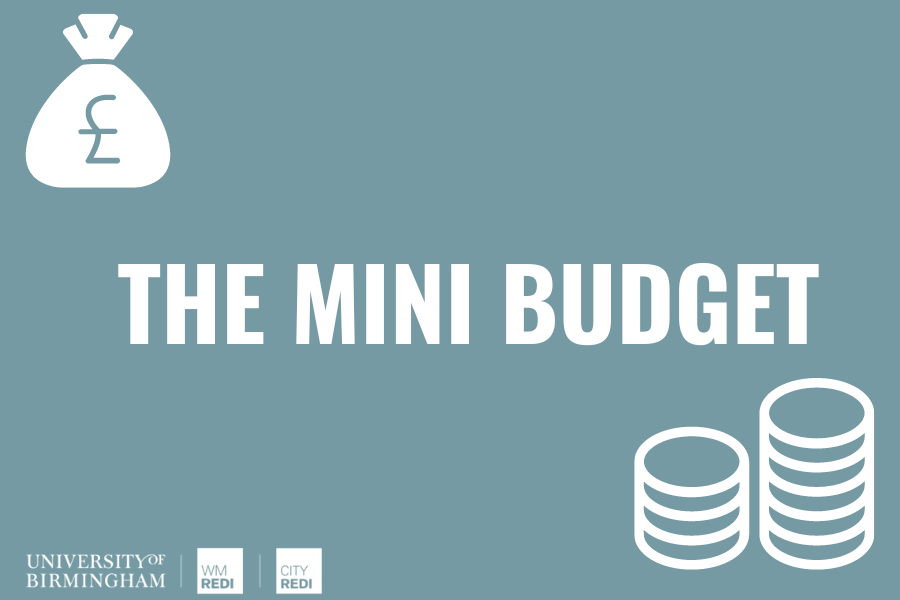 The ‘mini’ budget was released with the aim of helping to tackle and provide support for the growing cost of living crisis. However, this budget was far from a ‘mini’ one. This budget offers one of the largest tax-cutting regimes in UK history. It offers around £45bn of tax reductions for people and businesses by 2027: 50% more than anticipated before the mini-budget announcement.

The following are the key announcements made within the ‘mini’ budget: 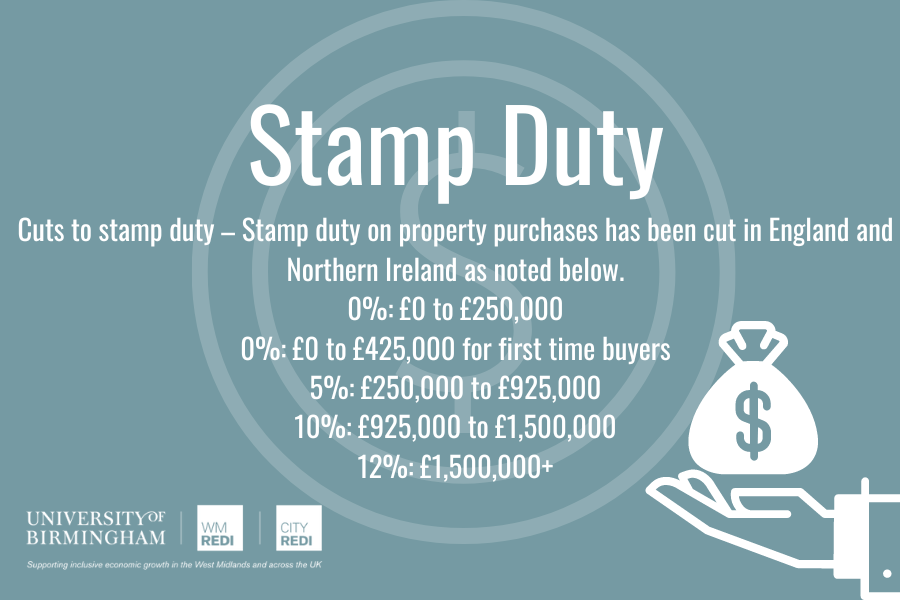 As stated above this budget is anything but ‘mini’. In fact, this budget represents the largest tax cut to the planned level of tax of any budget since 1972, as seen in the graph below. Whilst the tax reductions are substantial, their impact is forecast to only lower the tax burden to 2021-22 levels. This means the tax burden will still remain at its highest sustained level since the 1950s, according to the IFS.

Net permanent tax cuts as a percentage of GDP, relative to previous plans.

The Resolution Foundation has found that the gains from the personal tax cuts announced will go to the richest fifth of households. Almost half (45%) will go to the richest 5% alone, while just 12% of the gains will be felt by the poorest half of households. The graph from the Resolution Foundation below shows that the richest fifth of households will be on average better-off by £3,090 next year. Whilst the poorest will gain only £230. The government is chasing ‘trickle-down’ economics in an effort to boost economic growth.

To protect households from energy price rises, the government has announced an ‘Energy Price Guarantee’ (EPG). The EPG will raise household bills to £2,500 a year from 1st October from £1,971 currently; this is based on a household which uses 12,000 kWh of gas a year, and 2,900 kWh of electricity a year. This is a 26.8% increase in the price cap. However, this is a smaller increase than was expected as OFGEM was setting the price cap rise at £3,549 a year from the 1st of October, which would have been an 80.1% rise in the price cap.

Whilst, the new cap will help households, the energy price cap will have still almost doubled since the same time last year. In October 2021 the price cap was £1,277; the new £2,500 price cap is an increase in energy bills of 95.8%, representing almost a doubling of household bills within a year. This includes the £400 fuel discount for all households, so reducing the increase to around 64.4%. This will be devastating to most households and will likely plunge many households into fuel poverty. However, if the cap had increased to £3,549 in October, this would have been a 178% rise in the energy price cap compared to October 2021.

As of 2020, the West Midlands had the highest rate of fuel poverty of any region in England, as demonstrated in the map below. In 2020 17.8% of households within the West Midlands were fuel poor. Even before the energy price rises over the last year almost one-fifth of households in the region were fuel-poor. Energy bills have almost doubled even with the cap, meaning when data comes out for 2022 this figure will be much higher.

Unsurprisingly, more affluent areas of the WMCA, Bromsgrove (11.7%), Solihull (12.5%) and Lichfield (12.7%) have lower fuel poverty rates. This is likely a result of not only higher incomes, but more efficient housing reducing energy bills.

Earlier in the month, the government announced an energy price cap for businesses, to protect companies against rapidly rising energy prices over the winter. Businesses with high energy use are expected to be the most heavily impacted by rapidly rising energy prices. RedFlag estimates show that nationally there are 75,672 businesses with a turnover of more than a million and classed as high energy users that could be at risk of closure in the following months as a result of energy price rises. This would place hundreds of thousands of jobs at risk. Note this figure does not include all the businesses turning over less than a million pounds; therefore, there are likely to be more businesses at risk within the economy.

Data from RedFlag, produced for WMREDI, shows that currently within the WMCA, there are around 8,054 businesses with more than 10 employees which are classed as high energy users. Of these RedFlag found that 3,369 businesses would be at risk of closure, due to rising energy prices and their financial stability rating. The sectoral split of these businesses can be seen in the graph below.

To combat the rising energy prices and prevent businesses from going under, the government is going to cap the price that non-domestic consumers pay for both electricity and gas. The cap will fix wholesale prices for all non-domestic customers at £211 per MWh for electricity and £75 per MWh for gas. To put the size of this cap into perspective, based on the latest update from OFGEM, in July 2022 the expected cost of electricity per MWh was £413.59, a £211 cap would decrease the price by -48.98%. Based on WMREDI analysis of OFGEM figures, in July 2022 the wholesale price for gas was around £144.60 per MWh, a cap of £75 per MWH would reduce the price by -47.77%.

However, even with the cap, the prices are far higher than otherwise would have been expected. In September last year, electricity prices were £116.96 per MWh, a cap of £211 is an 80.4% increase on last year’s prices. Gas prices were around £38 per MWh in September last year, according to WMREDI analysis, the £75 cap is a 95.57% increase in prices. Therefore, whilst the cap on energy will prevent prices from rising exponentially, businesses have still seen their energy bills almost double compared to the same time last year.

Therefore, whilst the energy cap will undoubtedly save many firms from closure over the next 6 months, many may still be forced to close, given energy bills will be almost double the price they were paying last year, even with the cap. Plus, in 6 months many businesses may not be able to survive the removal of the cap. Therefore, over the next few months, we will still likely see the insolvency of more businesses, however, these insolvencies will be lower than would have been without the price cap.

The government argues that this budget is an ‘economic growth’ budget, but it is really more of a ‘tax cutting’ budget. There maybe be massive tax cuts to stimulate growth, but there are no other large-scale supply-side investment announcements, such as investment in skills. This budget heavily depends on the response of businesses and investors. If businesses take the opportunity of these tax cuts to invest, then it may increase economic growth. However, if they don’t the economy will quickly plummet into a severe economic recession.

The government will be heavily relying on the ‘animal spirits’ of businesses and investors within the market. Hoping that these tax cuts will increase investor and business confidence and spark economic growth in line with investments made. However, currently, the economy is not conducive to businesses investing. The reasons businesses and investors may not be incentivised to invest following this budget are:

The government is about to spend a very large amount of money, maybe even surpassing the amount spent during Covid-19. Alone, both the household and business caps combined could cost the government more than £150bn. Plus the government has dramatically cut taxes in this budget. It has made people question how the government plans to fund such large borrowing when the government is slashing revenue streams (taxes). However, the OBR was prevented from releasing its forecasts for this budget. The forecaster’s publication provides information to the UK government’s creditors (i.e. financial markets) on the sustainability of public finances. Preventing the OBR from releasing its forecasts can be interpreted as a clear message to both the public and financial sector that the government is not confident enough in its economic and fiscal policies to subject them to scrutiny.

Following the ‘mini’ budget announcements the value of the pound promptly plummeted against the Euro, as seen in the figure below. Sterling dropped 2.04% against the Euro and 3.25% against the US dollar. This is a 37-year low for the pound, since 1985. It would suggest that the market is not in fact confident in this new budget and the likelihood is that businesses and investors will not be incentivised to invest.

With rising inflation consumers are seeing the value of their money fall and as a result their levels of disposable income. So, they are changing their spending habits, by either spending less / being more frugal. The graph below from Deloitte shows how consumers plan to deal with rising prices – by reducing consumption.

These reductions in consumer spending are a serious concern given consumer spending accounts for half to two-thirds of all economic activity. Deloitte is forecasting that for Q3 of this year, essential spending will continue to rise with inflationary costs, and as a result, consumers will have less to spend discretionally, with discretionary spending expected to fall by 11% in Q3. Additionally, there is likely to be a further fall in disposable incomes in the following months as the Bank of England (BoE) continues to rise interest rates, leading to much higher mortgages for consumers. This may further tighten spending habits going forward. If consumer spending continues to fall so dramatically over the following months, businesses will be cautious around investing, if they think consumers will be unable to afford their products.

This blog was written by Alice Pugh, Policy and Data Analyst for City REDI and WM REDI.