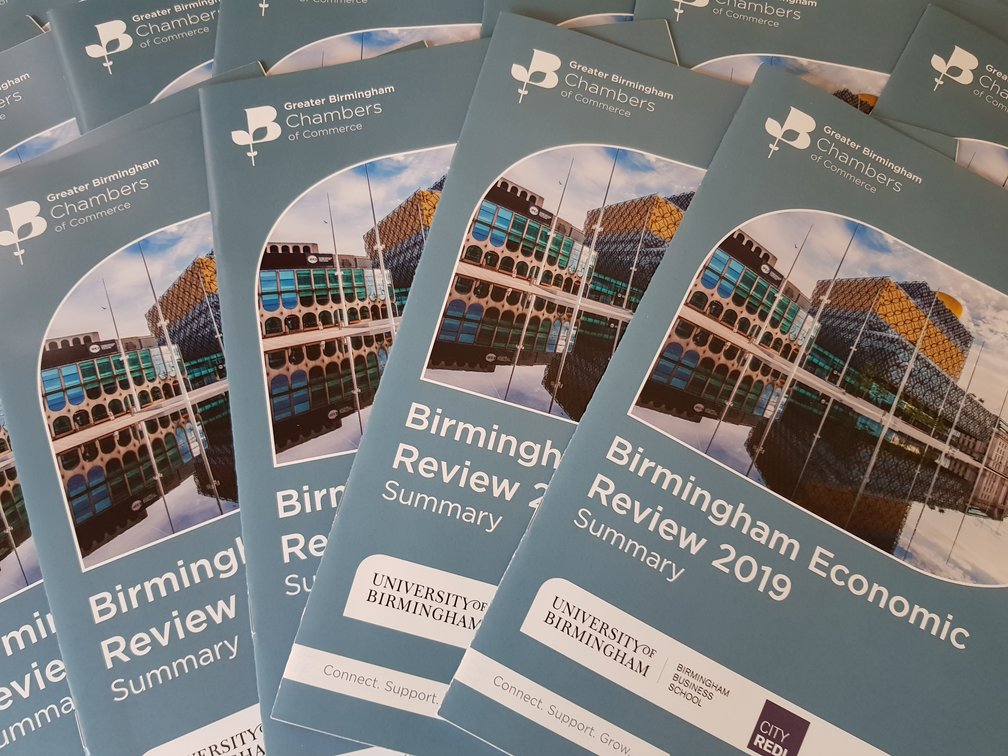 This year’s Birmingham Economic Review shows Birmingham is on a roll, but challenges around income inequality and deprivation remain.

This year’s Birmingham Economic Review – a collaboration between Greater Birmingham Chamber of Commerce and City-REDI – was launched last week to a packed room of delegates from across the city-region.

The event was opened by Professor Richard Black, Pro-Vice-Chancellor, Head of the College of Social Sciences, University of Birmingham who welcomed the attendees to the University.

Delegates then heard from City-REDI’s director, Professor Simon Collinson,  who presented the key data emerging from the region around economic growth, challenges on the need for inclusive growth, and the risk of EU-withdrawal on a region heavily dependent on the export of goods. (Download the full presentation).

The take-home findings were:

The region is young and diverse, a fact that has been celebrated extensively, but data in the report revealed that Birmingham is the biggest destination for inward migration outside of London, the most attractive for inward investment, and the third biggest for foreign direct investment.

“Birmingham”, as Professor Collinson said, “is on a roll”.

Celebrating the strengths of the region as outlined in the report, she said that many underestimate the size of the city and that there are three EU states smaller than Birmingham. Cllr Jones also highlighted the challenges ahead for the city. She noted that: “going forward we need to build a shared city narrative… that is inclusive and brings people along.”

One such challenge is air pollution, which the city council is aiming to address with a new Clean Air Zone.

Under the scheme – due to be implemented over the summer in 2020 – certain vehicles will be liable for a charge when they enter the city centre. Cllr Jones admitted that the scheme may have some impact on businesses, but reminded delegates that every 10 hours someone dies prematurely due to the effects of pollution. A driving force for the policy is the need to substantially reduce the harm of pollution on Birmingham’s residents.

Persistent intra-regional inequality remains a significant challenge. The employment rate is 65.3% compared to the national rate of 75%. Unemployment for the 16-64 age group is stubbornly high, 7.8% compared to the national rate of 4.3%. Additionally, the Index of Multiple Deprivation shows 56.4% of Birmingham’s population live in the most deprived 20% areas in England.

Birmingham is undergoing exceptional, perhaps unprecedented growth. The city is changing and it is regaining its confidence again. However, current economic growth is not following an inclusive trajectory. This was a point picked up by Nick Chism, Chief Business Adviser at Department of Business, Energy and Industrial Strategy stated that it was important that as the city grew, local communities should be included in this growth too.

The launch of the review had one clear message: For Birmingham to reach the full height of its potential, economic growth needs to reach all corners of the city, and every community.