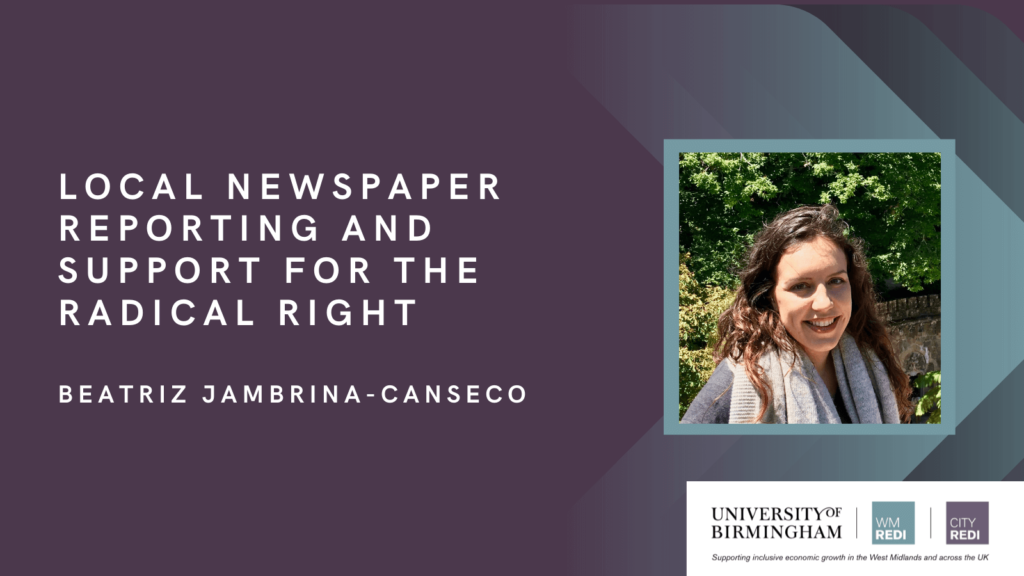 On the 16th of June, City-REDI held a webinar featuring Beatriz Jambrina-Canseco from the International Inequalities Institute, LSE.

The Stories We Tell Ourselves: Local Newspaper Reporting and Support for the Radical Right

Rising support for the radical right has become a hallmark of the current political landscape. As to the reasons driving voting decisions, researchers disagree on the relative importance of economic anxieties – amongst them grievances related to regional disparities – compared to a potential cultural backlash.

Previous efforts to settle this question have focused on voters’ personal characteristics and on regional socioeconomic indicators. An underlying assumption in these models is that people accurately internalize statistical information and use it to allocate their votes. This would imply that perceptions closely track socioeconomic statistics, something I show does not necessarily occur.

To tackle this issue, this article focuses on local narratives, which prior research shows strongly influence culture, opinions and beliefs. I posit that local newspapers – and the topics on which they choose to write their articles – reflect the prevailing worldview in a given geographical location. Taking Spain as an example, I build a machine-learning algorithm to determine the prevalence of given news topics across the national territory based on how many related articles local newspapers published on Twitter over the year 2018.