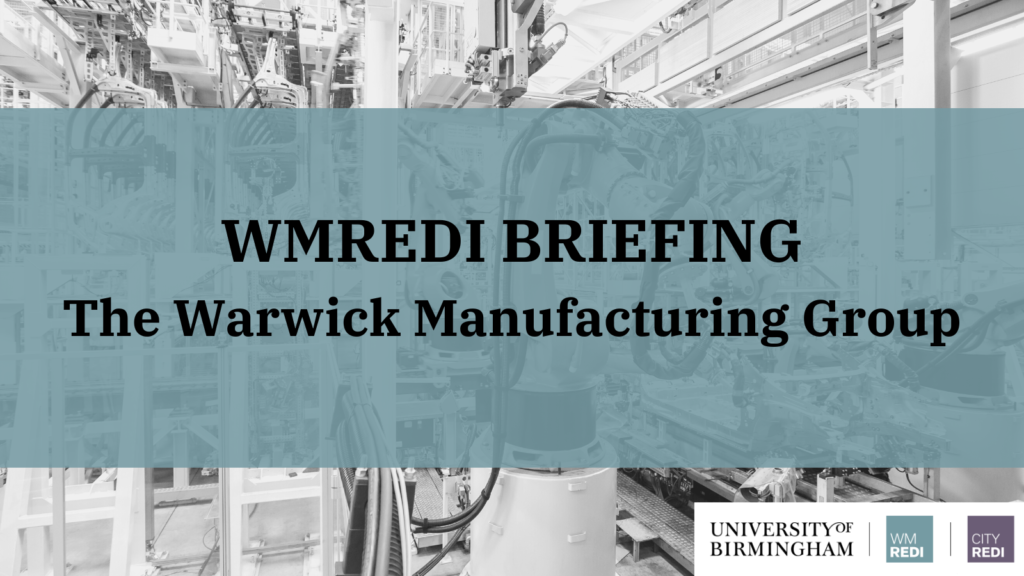 In this policy briefing, Robert Lynam, Dr Chloe Billing and Professor Simon Collinson outline the publicly available information about Warwick Manufacturing Group’s (WMG) capabilities and impact, as well as identifying any gaps. This basic scoping work was conducted via internet searches and has a particular focus on what is known about WMG’s governance structure, size, scale, facilities, employment, funding structures, turnover, and growth.

­The research represents the initial phase of a project which City-REDI/WMREDI are delivering on ‘Universities’ STEM Assets: Commercial and Non-Commercial Pathways and Aggregate Impacts’.

The aim is to track and compare different interventions or investments, as micro-level pathways to impact, which in aggregate produce macro-level growth patterns. Commercial and non-commercial types of innovation will also be studied in order to understand the trade-offs between productivity growth and improvements in sustainability or inclusivity at the regional level. Such an understanding underpins policies to attract more public R&D investment and guide better growth in the West Midlands.

The research presented in the policy briefing confirms WMG’s reputation as being one of the key anchor institutions in the region which support science and innovation. The hybrid nature of the organisation, which has functions as both an HVM Catapult centre and a department within the University of Warwick, plays an important role in enabling its mission-led and multidisciplinary research strategy. Such a strategy has contributed to tremendous growth over the past 40 years.

However, what is also apparent is the lack of publicly available impact assessments which specifically relate to WMG. The closest thing to a holistic picture of how and to what extent WMG impacts the region at the present time is its own selection of individual case studies. The absence of a detailed understanding significantly constraints effective policy making aimed at encouraging similar success across the region.

The findings presented in the policy briefing will be used as a foundation for next phase of empirical research which aims to establish the existing ‘state of the art’ in this field. This will involve a ‘deep dive’ case study WMG aimed at building an understanding of the specific regional contribution the fixed asset makes and the factors that constrain its innovation and productivity growth.

If you liked this blog, we also did research on STEM assets in Tysley Energy Park.