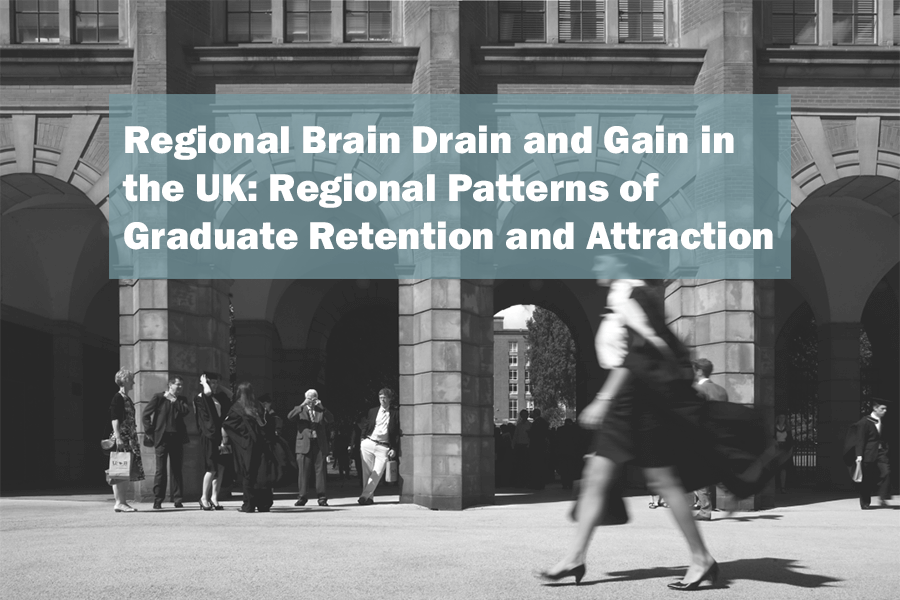 New workers with higher education qualifications can improve and level up a region’s skills base and contribute significantly to regional economic and productivity growth. This new WMREDI report draws on Higher Education Statistics Agency (HESA) data for the academic years 2015/16, 2016/17 and 2018/19 to explore graduate mobility patterns across the UK regions. The key objectives are to:

Inter-regional mobility is higher for students than for new graduate workers (i.e., those in employment fifteen months after graduation), as regions retain, on average, more new graduate workers after their studies (61.1%) than residents making the transition to becoming university students (56.3%, based on the 2015/16 cohort of graduates). However, there are remarkable regional differences in terms of both student attraction and graduate employment. For instance, there is a clear North-South divide in the graduate attraction figures. In particular, of the total 2018/19 university graduates who moved to a different region for work, 65.3% moved to London, the East of England, the South East and the South West, whereas only 15.9% migrated to the northern English regions. The East of England attracts the highest percentage of new graduate workers, partially reflecting the job opportunities in Cambridge. London performs more strongly in terms of attracting new graduate workers than students. This may be because whilst some people are put off from studying in London due to the high living costs, they might feel that increased graduate opportunities on offer in the capital compared to the rest of the UK make the move more viable once they enter the labour market. 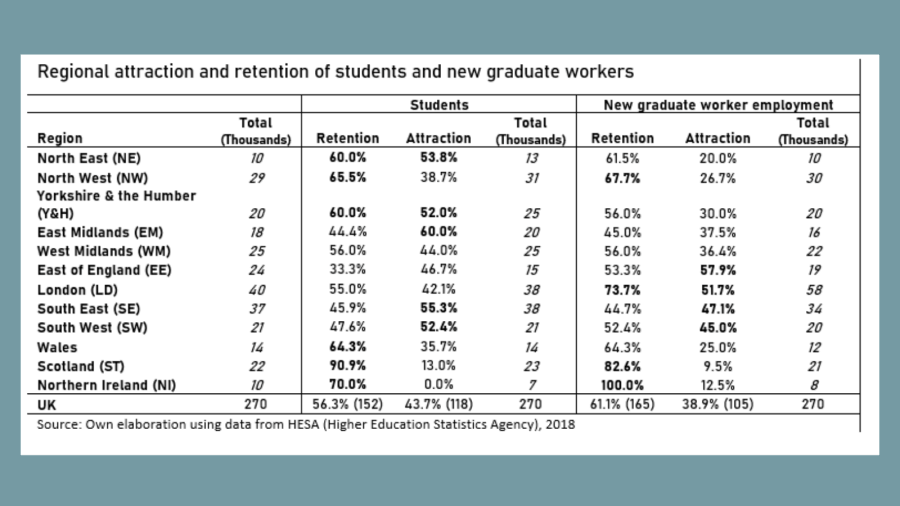 Graduate retention rates are higher for women than for men (as shown in the Figure below). Interestingly, the difference in the retention rates between genders is more pronounced in the North East, Wales and the West Midlands (standing at 10.9, 10.3, and 10.1 percentage points, respectively). The observed effect of gender on the probability of remaining locally for work after graduation could be associated with better occupation opportunities and the quality of jobs offered to men compared to women, particularly in the early stages of their careers, thus representing another reflection of gender inequality. A second interpretation may relate to disparities in the willingness to move and differing attitudes towards transregional job offers between genders, as women might find less attractive such offers in terms of wages and career prospects. Moreover, a higher percentage of women than men enter jobs in the public sector and such opportunities are more geographically evenly spread than private sector jobs.

Graduate attraction and retention rates by region and gender 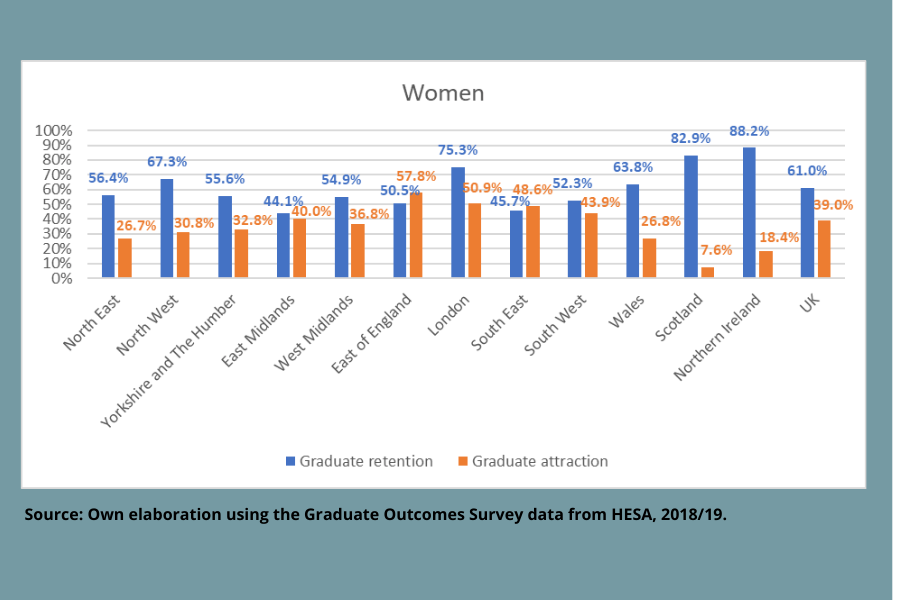 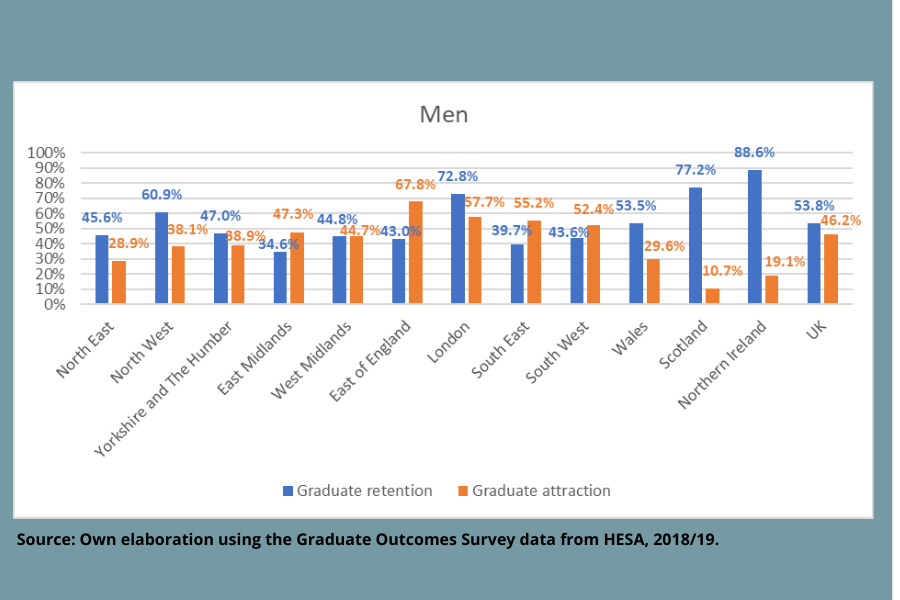 Similarly, the likelihood of staying local is higher for new graduate workers who attended a postgraduate taught course (standing at 63.4% on average in the UK) than those who hold only a first degree (54.4%), whereas the attraction rates are higher among the first-degree graduates (45.6%). These figures likely suggest that students make rational decisions regarding the region of their postgraduate studies, which, in many cases, is inextricably linked with their subsequent employment destination and career goals. In addition, the pattern described above could also imply that the postgraduate programmes of universities have placed a strong focus on establishing collaborations and developing networks with local businesses and have taken relevant initiatives that enhance the labour market prospects of their graduates within the region. 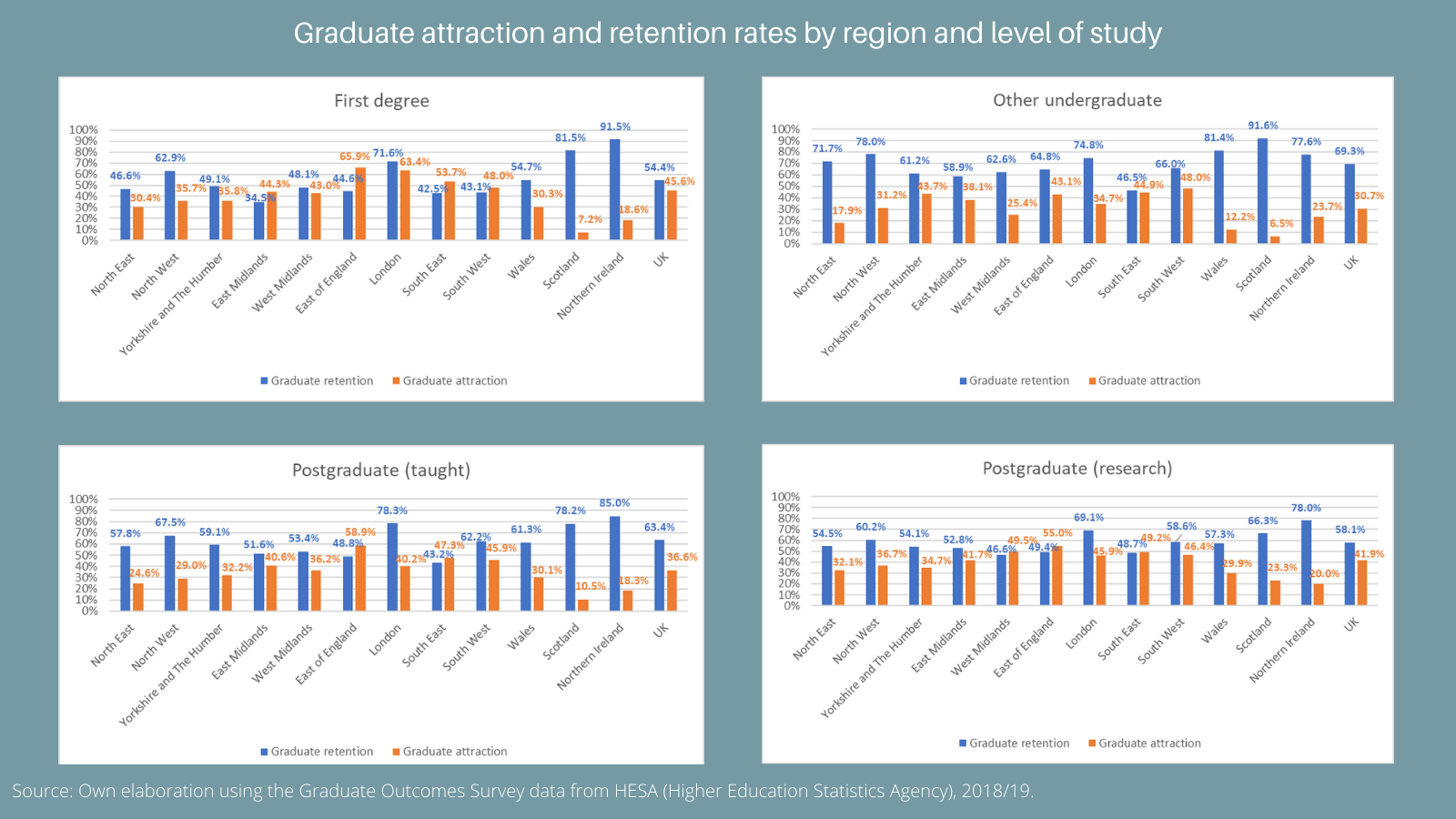 Finally, graduates with a qualification in Arts, Humanities, and Education are far more likely than STEM (Science, Technology, Engineering and Mathematics) and LEM (Law, Economics and Management) graduates to stay in the same region of study for work. Conversely, regional attraction rates are generally higher among STEM graduates (standing at 46.6% on average in the UK) than those with higher education qualifications in other subject areas. This picture likely mirrors the increasing demand for particular high-level skills across regions. Most notably, the East Midlands (33.8%) sees the lowest retention rate among STEM graduates in the UK, followed by the West Midlands (42.0%) and the South East (43.6%). The low retention rates observed in these regions do not necessarily imply that recent graduates relocate for work. These figures could also reflect that a significant proportion of new graduate workers might still reside in their home/study region and commute to work in London because of good transport links. This should be particularly relevant in the context of the Covid-19 pandemic, which has resulted in a significant amount of the labour force working primarily from home. 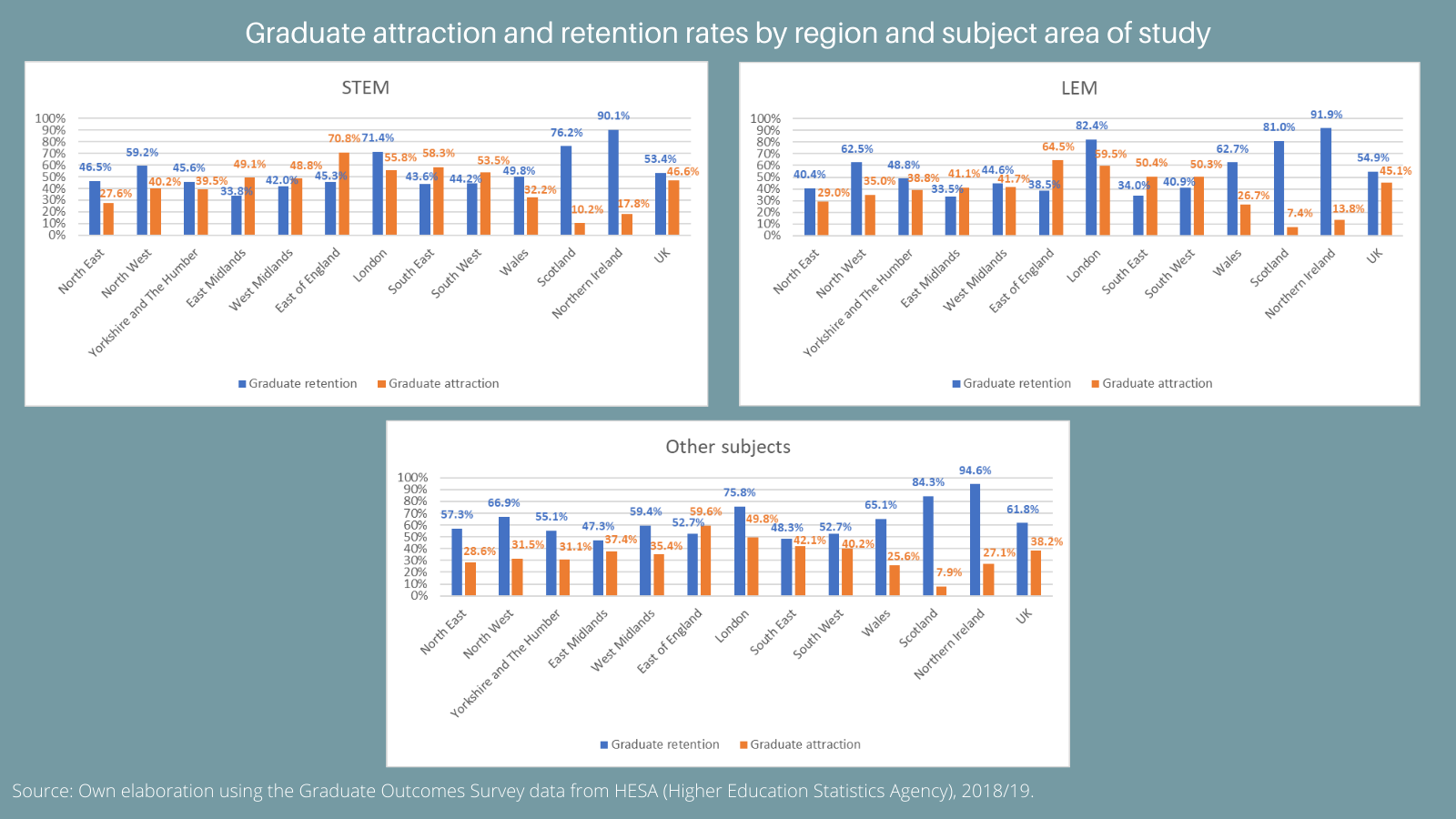 The development of some key sectors with considerable potential for economic growth (such as the life sciences, low carbon, and digital industries) provides opportunities to improve graduate retention in the UK regions through creating high-quality jobs. For example, the technology sector has the potential to generate 52,000 new jobs by 2025 in the West Midlands, thus contributing to the UK economy by £2.7 billion. Therefore, it is crucial to align universities’ knowledge offer with existing skills needs and to identify impediments to graduate retention, especially in regions with many skills shortage vacancies. This becomes particularly challenging in light of the existing skills mismatch issue at the national level. Universities have an important role to play in contributing to skills initiatives, regional economic strategies and recovery. This report suggests they could capitalise on opportunities in the emerging sectors through the greater provision of flexible learning and novel degree structures.

Given that the probability of choosing a specific location for work depends on various social, spatial and professional factors, it is essential to shed more light on some of these determinants that influence graduates’ decisions. Therefore, WMREDI will shortly publish an additional report on “Graduate pathways: Identifying patterns of regional retention and attraction”. This will explore how regional graduate retention and attraction rates differ by individual characteristics (such as ethnicity and academic ability), type of university attended (e.g., Russell Group, Post-1992 institutions), industry sector and level of skilled employment. It will be based on an analysis of the Graduate Outcomes Survey for the academic year 2018/19.

This blog was written by Dr Kostas Kollydas, City-REDI / WMREDI, University of Birmingham.