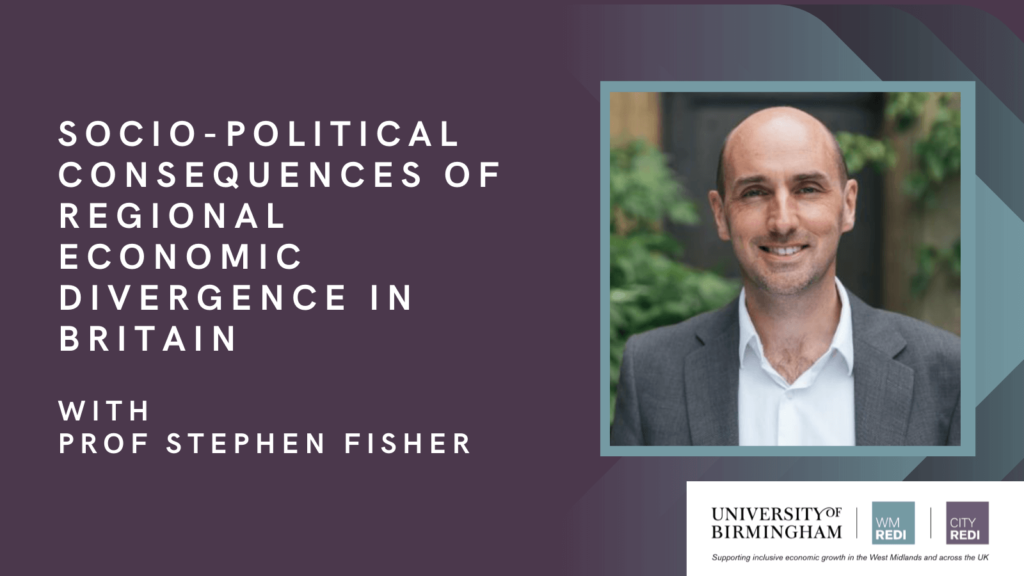 On the 28th of April, City-REDI held an external seminar featuring Professor Stephen Fisher from Trinity College, University of Oxford – (with Martha Kirby and Eilidh Macfarlane).

Regions and nations of Britain have become still more economically divided in recent decades. This is sometimes supposed to have led to misery, distrust and political alienation in poorer regions, which might accordingly have developed more left-wing, pro-welfare and authoritarian attitudes.

This paper assesses the extent to which social and political attitudes in different regions and nations of Britain have indeed become more polarised, in line with regional economic divergence. Our analysis is primarily based on the British Social Attitudes (BSA) survey series, which started in 1983.

Keeping Scotland separate, within England and Wales we find broad North-South regional economic divergence, especially with respect to London, but surprisingly little sign of the corresponding divergence on a wide variety of social and political attitudinal measures, including happiness, interpersonal trust, political trust, political engagement, economic values, liberal values and party support. There have been only slight tendencies for worsening self-reported health outcomes and greater political alienation in the North relative to the South, but also some convergence on economic left-right attitudes and party support.

One possible reason for the absence of much North-South socio-political divergence is that greater prosperity in the South may have been a mixed blessing, as greater income growth has been accompanied by intra-regional inequality and higher cost of living. While there has been remarkably little change in broad North-South socio-political divides over the past forty years, in various respects both London and Scotland have followed distinct trajectories.

Summary of the event

If you would like a copy of the slides please get in touch.