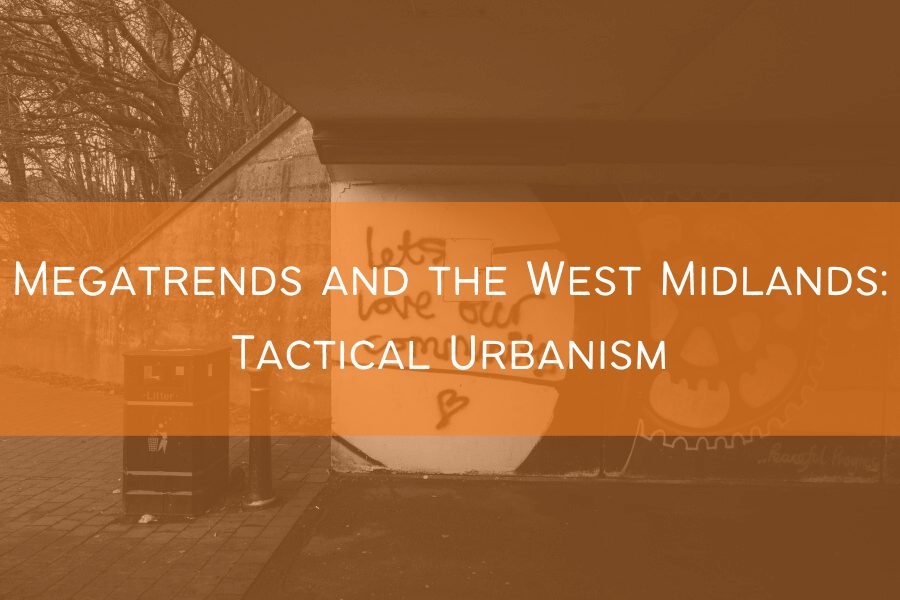 What is ‘tactical urbanism’?

‘Tactical urbanism’ (TU) is ‘an approach to neighbourhood building and activation using short-term, low-cost, and scalable interventions and policies’ (Lydon and Garcia, 2015: 2). TU projects can range from small, unsanctioned initiatives such as guerrilla gardening – unofficial planting in disused urban spaces, to official council-led projects such as the temporary closure of roads to traffic and the installation of seating to encourage social cohesion. TU is a dynamic and reactive approach, allowing for ideas to be prototyped quickly (Hamdi, 2010).

TU has gained significant momentum as a movement globally in the last fifteen years, but the shock of the COVID-19 pandemic has accelerated this trend and demonstrated the great opportunities this approach offers for cities to ‘build back better (Moser, Malzieu, and Petkova, 2020). The option of moving from small-scale independent interventions to formally integrating TU approaches into planning policy and city strategy is worthy of urgent consideration if Birmingham and other UK cities are to benefit from the opportunities of this global trend.

Three key opportunities of this trend are:

Who can do this?

Global experience shows that people at a range of scales utilise TU as an approach to shaping city space:

Times Square in New York is an example of how TU can transform a business district, bringing both placemaking and economic benefits. Over a single night in 2009, the New York Department for Transportation used deckchairs, flowerpots, and paint to radically transform Manhattan’s central traffic hub into a temporarily pedestrianised safe and welcoming area. The intervention was a resounding success, with members of the public excited about the new sense of place and social connection that the pedestrianisation brought, and business owners reassured that (contrary to their initial concerns) footfall and revenue would increase. After the successful initial trial period, a $55 million investment was given to make the development permanent.

In 2005, a San Francisco-based art collective ‘Rebar’ paid money into a parking meter so they could legally occupy a car parking space for the day (Littke, 2016). Instead of parking a car, they placed turf, a bench, and a tree in the space to create a miniature park – a ‘parklet’. This catalysed an annual international event ‘PARK(ing) Day which encourages the re-purposing of on-street car parking spaces for the day. By 2011 had seen 975 parks were created in 162 cities including the UK (Herman and Rodgers, 2020). Seeing the success of this informal approach, the San Francisco city council developed a formalised parklet program ‘Pavements to Parks’ (now called ‘Ground Play’) which assists citizens in designing, funding, and building permanent parklets around the city (GroundPlay, 2021). These are then usually maintained by residents, neighbouring businesses, and community organisations who benefit from the increased pedestrian activity. Following the success of this program, similar programs have been initiated by city councils globally from Boston to Melbourne.

New Zealand was the first country to make tactical urbanism part of its official government policy response to the pandemic (Reid, 2020) by launching the NZD $7 million ‘Innovating Streets for People’ pilot fund in August 2020. This will provide funding for city council projects in the coming years (New Zealand Transport Agency, 2021).

Policy messages: Why tactical urbanism is worth considering and extending

There are promising TU projects currently ongoing in West Midlands Cities. The Active Wellbeing Society (a cooperative working to build healthy, happy, and connected communities) has initiated a project called ‘Reclaiming the Commons’ which encourages citizens to use the TU technique of stencils and chalk to redesign their local area e.g. marking where they would like to see bike lanes (The Active Wellbeing Society, 2021).

This blog was written by Verity Parkin, Researcher, LANS, University of Birmingham.

Disclaimer:
The views expressed in this analysis post are those of the authors and not necessarily those of City-REDI  / WMREDI or the University of Birmingham.