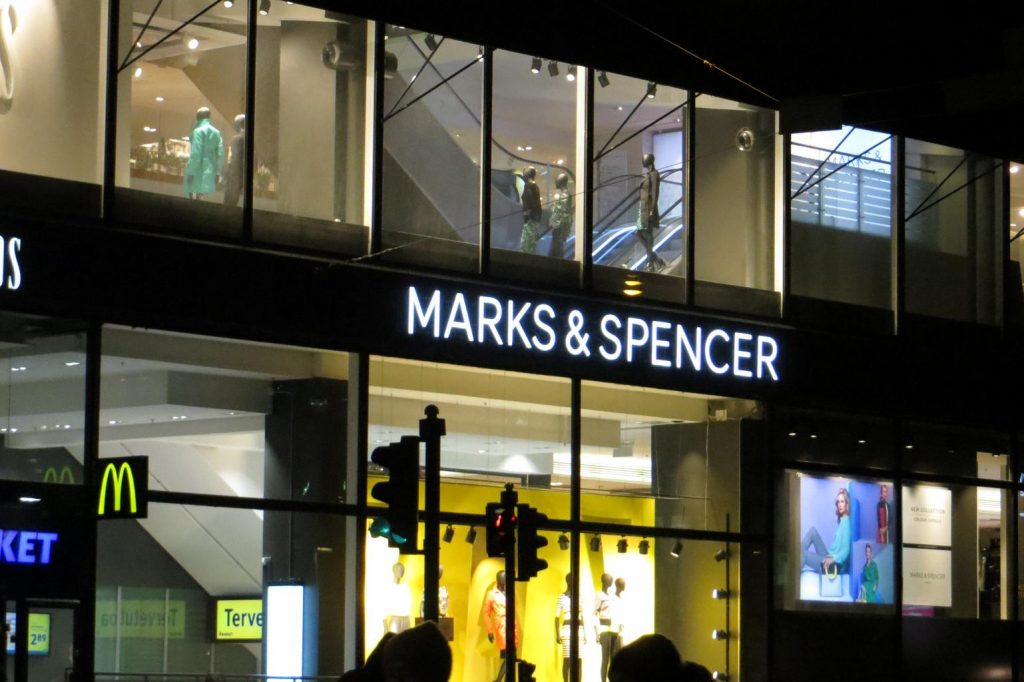 Recently, the UK retail industry has been facing six challenges, namely: 1) a squeeze in incomes; 2) the shift to online shopping; 3) changing tastes; 4) rising overheads; 5) high debt; and 6) simply too many shops. Following the closure of Toys R Us, Maplin and certain New Look stores, approximately 5,500 people are already out of a job in the UK, highlighting the economic impact of the declining high street. It seems as though Marks and Spencer (M&S) is now also struggling as a result of the aforementioned challenges to the UK retail industry, signalling that it could be the latest firm to succumb to the 2018 retail crisis.

Since its inception as a small market stall in Leeds in 1884, M&S has grown to become an iconic British clothing retail firm that employs approximately 85,000 employees across 1,433 stores worldwide. However, earlier this week M&S announced the closure of 14 stores (see Figure 1), followed by plans to close a total of 100 stores in the UK by 2022. 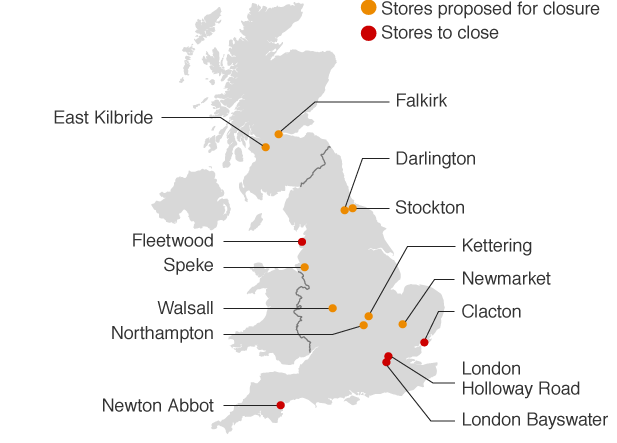 Reportedly, the closure of these 14 M&S stores jeopardise 600 jobs; taking this average of 43 employees per store, it is anticipated that with the closure of 100 stores 4,300 jobs will be at risk. However, these upcoming job losses come off the back of M&S’s ‘radical transformation’ initiative which has already seen the firm close 22 clothing stores, which has already seen 900 jobs axed, but also involved the refurbishment of other stores, with associated costs  £321 million. This expenditure in light of the challenges facing the high streets was perhaps a little risky. Either way, M&S are now evidently focusing on shrinking their operations to try and ensure viability.

Dependency on the UK

Although M&S is a global firm that serves 32 million customers every year, the majority sales are in the UK. Taken from M&S’s 2017 annual report, Table 1 demonstrates that the firm generated an impressive revenue of £10,622.0 million in 2017. However, it also illustrates that approximately 89% of these came from the British market, meaning that M&S is highly dependent on the UK market. Although M&S has been a bastion of the British high street, and the aforementioned figures are perhaps unsurprising, the scope of their operations does expose the firm to risk; if the UK retail industry suffers, this will have a severe impact on the organisation. Although M&S are still turning a profit, this year the organisation is expected to report pre-tax profits of £573m, down from £614 million and £684 million in 2017 and 2016 respectively. This decline is not a recent phenomenon; M&S has been slowly deteriorating over the last two decades. In 1997, M&S achieved its peak clothing market share of 13.5% in the UK, but 20 years later the firm can only lay claim to 7.6% of the market, coming in marginally ahead of Primark’s market share of 7%. It is therefore important to try and understand what went wrong to explain this erosion in their market position. 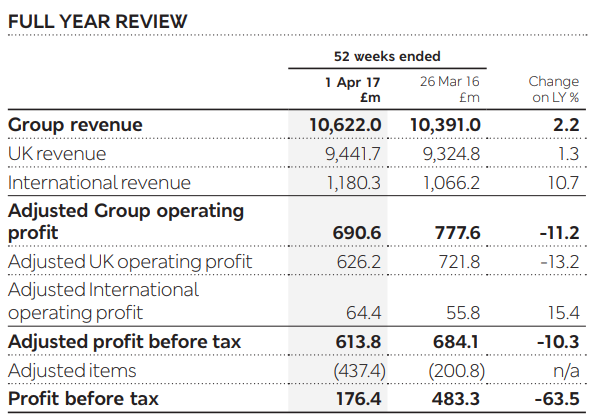 The M&S brand is certainly well known, yet much of the organisation’s past and present issues are attributable to the brand itself. More specifically, that M&S has been struggling with strategic drift, which refers to the gradual deterioration of competitiveness due to failing to acknowledge and respond to the changes required in a business environment. For instance, M&S has undoubtedly acquired loyal customers over the years, but these loyal customers are typically ‘older’ in comparison with customers who shop in H&M, Zara etc. Shopping habits also show that the problem with acquiring loyal customers who are older is that they are less likely to purchase new outfits on a regular basis. Importantly, M&S didn’t gain an ‘older’ customer demographic from day one; customers have perhaps grown up with the brand. In combination with this, M&S is not as successful at attracting new, young customers as it’s high-street rivals, as they have failed to keep pace with changing fashion trends in order to attract the younger demographic, resulting in the current perception of M&S’s brand suiting the fashion tastes of the ‘older’ generation. Rather than being perceived as a key player in the fast fashion market, M&S has cultivated a reputation based upon classic styles and quality; however, this reputation is also at risk. Despite the importance of the older demographic, M&S does ensure that their products are in line present fashion trends. However, when M&S have attempted to compete with rivals such as H&M and Primark, the quality of their products has suffered; it is not possible to compete with such firms without trade-offs. It has tarnished their reputation and had a negative impact on their brand and identity. Also, M&S’s sub-brands, which include Per Una and Limited Edition, have been unable to rescue the firm from the decline, partly as M&S’s customers do not fully understand who these products are actually intended for. While trying to appeal to both it’s loyal, core customers, as well as attract new, younger shoppers, M&S is getting ‘stuck in the middle’.

As with all retailers, M&S is currently facing more competition than ever as the internet has made it extremely easy for customers to compare prices and shop around. In fact, GlobalData has reported that approximately 25% of all footwear and fashion related products in the UK are now purchased online. The opportunities provided by the internet have resulted in brands such as ASOS growing their dominance in the retail market which is leading to the demise of traditional shopping. This has resulted in high street retailers experiencing lower footfall, and in turn, a decline in in-store sales. This affects the profit margins that respective stores can achieve, and in turn firms such as M&S must make difficult decisions about the future viability of particular outlets.

The recent decision by M&S to close 100 stores in the UK will reduce their total number of stores by 30%. It has been reported that even these significant closures will not be enough and that M&S should further downsize to ensure longer term survival. The need to reduce high street presence is not the only issue; many of M&S’s stores have not been refurbished for a number of years or even decades, which has left them looking quite old, scruffy and inevitably less attractive for customers to enter. Despite the introduction of coffee shops and other services in a bid to be inviting to customers, more work is required to encourage footfall.  However, refurbishment costs money, a luxury which M&S doesn’t have. It may seem that M&S is able to offer respite from the tough conditions facing the clothing retail industry, but unfortunately, this segment of the business is also experiencing negative growth. This is because rivals such as Waitrose and even Aldi have caught up with the market and started to provide food products similar to M&S, eroding its competitive advantage.

In summary, M&S have failed to adapt their products in line with fashion trends, resulting in older customer demographics. Acknowledging this, M&S have attempted to acquire a ‘younger’ demographic via sub-brands, but this has ultimately resulted in confusion with regard to the target market, as well as quality issues. These factors have left M&S without a clear identity and have damaged the M&S brand. The shift to online shopping, combined with the uninviting appearance of the firm’s dated clothing stores, have resulted in M&S experiencing difficulty in maintaining the performance of their high street stores. With this in mind, M&S has announced that they will close 100 stores by 2022.

M&S is not the only firm to be facing challenges in this tough market environment. The needs of customers are changing and M&S, as well as many other retailers, are unable to adapt quickly enough to maintain profitability, particularly as the internet has given rise to new business models which allow for greater profitability due to reduced fixed costs. Recent years have seen the demise of BHS, a once stoic rival to M&S, and the retail crisis that has unfolded in 2018 has already claimed Toys R Us, Maplin and New Look as victims, and unfortunately, M&S now appears to be joining this list.

Seven reasons why Marks & Spencer is in trouble