Creating Constellations in the City

As humans, we often want to create order and patterns out of objects that we see that have no real relation to each other. The constellations in the stars are the classic case. Stars that are many millions of light years apart, to our eyes look as if they form patterns. We connect the dots, find shapes and even name them such as Orion or The Plough. I’ve been reflecting on the way we create patterns and draw constellations in the light of a walk around part of Birmingham I led.

I wanted to organise a sponsored walk for The Feast, a youth project that brings together young people of different faiths. It’s based in Birmingham, so I wanted a fundraiser that would catch people’s attention, be a challenge, have some link to the work of The Feast and raise some money! 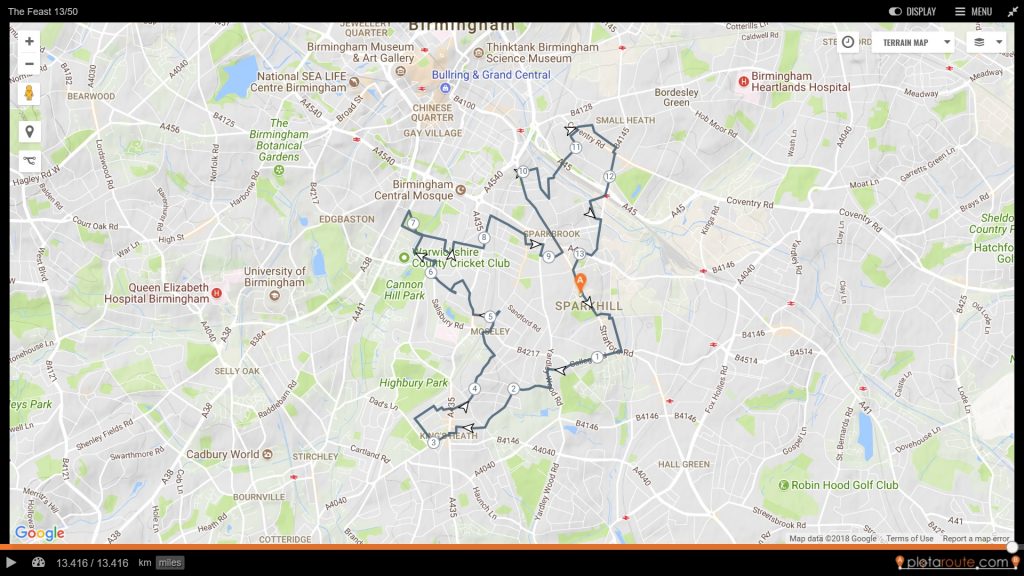 Knowing the area of South Birmingham well, I was aware that there were many different places of worship so decided to devise a route that would mean that we walked past fifty different places including as many different faiths and denominations within the faiths as possible. The route ended up being thirteen miles long and did indeed pass fifty places of worship. Because of the looping natures of the route we didn’t retrace our steps or cross our path at all during the walk, neither did we get any further than two miles from our starting point; the two points furthest away from each other were just four miles, yet we managed to pass the desired number of fifty places of worship. Furthermore, we passed an extraordinary variety that would be unusual in many large towns or cities, yet this was just in the South East area of Birmingham. The places included:

Mapping the route was an interesting exercise but the real complex diverse nature of the areas only really came alive through walking the route. On foot one saw, not only the religious fabric of the area, but the socio-economic, ethnic and religious make up that changed markedly as we went along. We passed through areas of significant economic depravation close to some of the wealthiest suburbs of the city, areas of housing, retails or small industrial units, we crossed over rivers, roads and canals and under railway lines. At times it felt that we had travelled to completely different cities (or countries) from where we had been just a couple of hours before, yet we were only a few miles away.

As we walked the connections between the places started to have meaning as we moved from one suburb to the next and stopped for refreshment at some places. At others we met worshippers and told them what we were doing, they were intrigued and always pleased to know that they were on our route.

Looking back, one can see a slice of Birmingham, a fascinating cross-section that could be further studied and reflected on. Yet it is also an arbitrary section, we followed no known route and crossed into different neighbourhoods seemingly at random. Yet a picture emerged simply because a series of random places of worship had been joined together through the desire to create a line for our walk. They acted the part of the stars in a new constellation which brought a coherence to part of the city and enabled us to explore the diversity in ways that wouldn’t have been obvious if we had followed main roads or stuck to certain suburbs. Drawing the line connected the places of worship and delineated an area that could be looked at in a new way.

In Psalm 8 in the Bible, the Psalmist is inspired to praise God when he considers the moon and stars. Down the centuries people have looked at the heavens and been awed by their notion of a creator who has brought such a wonder into creation. In a city where it’s hard to see the stars due to light pollution perhaps we can create our own ‘constellations’ using the physical environment and is so doing become open to the wonder of the rich diversity and complexity not just far out in space but right on our doorstep.

For more details of The Feast see www.thefeast.org.uk