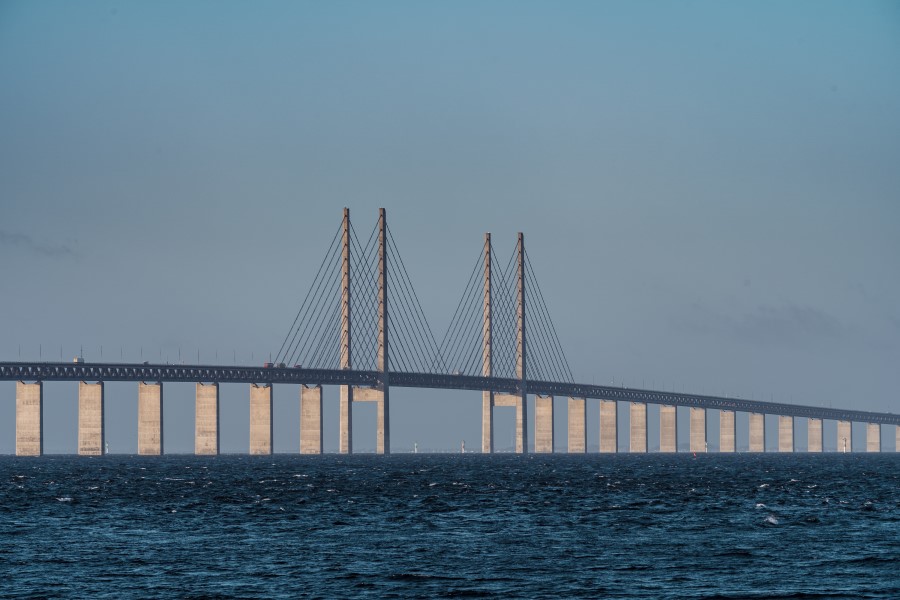 Gina Coe looks at the experiences of investing in infrastructure, specifically the Øresund Bridge situated in the Øresund Region, to address regional inequality.

Infrastructure investment can boost a region’s economic growth in the short-, medium-, and long-term, as well as working to address regional inequalities and disparities in outcomes.

The blog shines a brief spotlight on the models of governance and financing used in the construction of the Øresund Bridge. Further details of this case study and others can be found in the ‘Addressing Regional Inequalities’ report. This blog is based on research and interviews with stakeholders conducted as part of the project.

What is the Øresund Region?

The Øresund Region, part of a wider metropolitan area known as Greater Copenhagen, is a historic region of Sweden and Denmark. The region joins the Danish cities of Copenhagen, Odense, and Roskilde with the Swedish cities of Malmö, Lund and Helsingborg, as shown in Figure 1.

In 2019, the region recorded a population of more than 4 million inhabitants, with the population growing by 0.8% in 2018. The region is also of economic importance, accounting for 25% of Sweden and Denmark’s total GDP (Gross Domestic Product) combined.

Why was the Øresund Bridge Needed?

The Øresund Bridge has been in demand since at least the early 1900s. However, the effects of deindustrialisation, felt most acutely in the 1970s and 1980s, furthered the political will and drive for infrastructure investment.

The city of Malmö – alongside Copenhagen – was particularly affected by deindustrialisation, due to its industrially focused economy. As such, Malmö saw significant declines in its industrial employment and an overall population decline of 35,000 residents.

What did the Øresund Bridge aim to address?

The Øresund Bridge sought to address the economic, administrative, institutional, and technical barriers within the region.

The Swedish and Danish governments signed an agreement in 1991 to construct the bridge, following an agreement 18 years prior that was not acted upon. Construction on the Bridge began in 1995 and it opened in 2000. The Bridge is formed of a railway and motorway which connects Copenhagen and Malmö.

How was/is the Øresund Bridge governed and financed?

The Øresund Bridge was constructed and is owned and operated by Øresundbro Konsortiet, which is jointly owned by the Swedish and Danish national governments through state-owned corporations.

Tolls generated from the Bridge, mainly those commuting via car travel, are used to repay these loans. The Bridge is expected to be repaid by 2050.

What Impacts has the Øresund Bridge had?

Every day 75,000 people use the Øresund Bridge, with half of the freight between Sweden and Demark using this fixed link. As a result of this cross-border commuting, the Bridge has reportedly delivered an estimated economic gain of £7bn billion to the Øresund Region.

What Challenges has the Øresund Bridge faced?

A number of stakeholders that we spoke to highlighted the recent challenges that stricter border controls and COVID-19 travel restrictions have presented to the Bridge and cross-border movements. One participant noted that due to these challenges, many individuals were looking for new employment opportunities that bypassed the Bridge entirely.

The Bridge’s use of tolls has also presented a challenge, with tolls previously lowered to facilitate greater commuter flows. A further challenge identified by participants relates to how the revenues from the Bridge return to the Swedish and Danish national governments rather than the regions in which the Bridge is situated. This return of revenue was seen as a particular challenge and downfall of the Bridge’s construction and design, with regional governments looking to adapt the financial structures of future infrastructure investments to ensure some revenue returns to the regions.

What Learning can the Øresund Bridge provide?

The Øresund Bridge provides an example of bi-national infrastructure investment, with unique governance and financial structures. This example can provide key learning for investments in infrastructure elsewhere, notably in the delivery of the UK’s Levelling Up Agenda (view our work on Levelling Up) and Build Back Better strategy. One key learning point can be found within the adaptation of future infrastructure projects to overcome the challenges associated with the return of the Bridge’s revenue to the national governments of Sweden and Denmark rather than their regions. This pro-active approach, based upon a critical evaluation of past projects, could prove to be a useful example of evidence-based and future-forward leadership that aims to build upon the strengths of past initiatives and mitigate against their difficulties. Such leadership could be implemented elsewhere to ensure the delivery of continued, high-quality, and highly beneficial infrastructure projects for communities.

For a more detailed study of the Øresund Bridge and wider exploration into the Øresund Region’s initiatives and organisations aimed at addressing inequalities, enabling integration, and boosting knowledge systems see the wider ‘Addressing Regional Inequalities’ CIPFA report. This report also contains a number of other interesting case studies from international city-regions, that provide key learning for the UK and elsewhere.