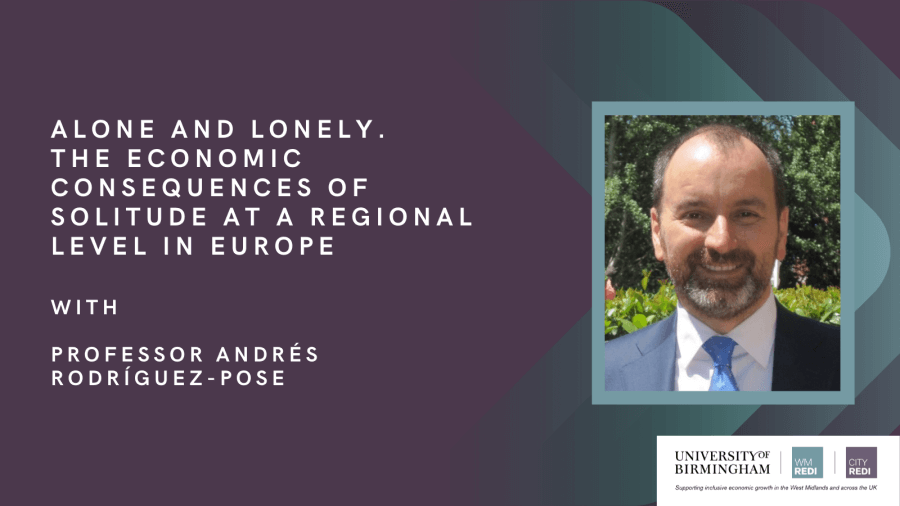 Alone and Lonely. The Economic Consequences of Solitude at a Regional Level in Europe

The paper analyses the aggregate subnational economic consequences of the two dimensions of solitude, being alone living and feeling lonely, in Europe. The analysis is based on data from 139 NUTS-2 European regions representing 13 countries from 2011 to 2017. The data is extracted from EUROSTAT and the SILC, ESS, ECHP survey and the Quality of Government Institute Database.

‘Living alone’ patterns, measured as the share of the population in one-person households, show a clear national pattern showing deep geographical divides in Europe. It has a higher presence in the North of Europe (North-Holland, Helsinki, London, among others), while its presence is lower in the East and the South of Europe. A clear rural-urban divide can also be seen; living alone shares are higher in large cities than in small towns and rural regions.

The Regional Sociability Index is used to proxy the effect of loneliness or ‘to feel lonely’. It presents different geographical patterns than living alone. Many regions with a high share of living alone population have high sociability index. When measuring sociability as “weekly interpersonal contacts”, differences across regions within countries were severe.

The results show that the two dimensions of solitude have important implications for economic development but go in different directions.

Over time, European regions with lower sociability grow less than those where local citizens appear to be more sociable. However, the ‘loneliness effect’ on regional economic growth depends on the frequency of in-person meetings, with large shares of the population meeting others every week, which appears to report the highest economic returns.