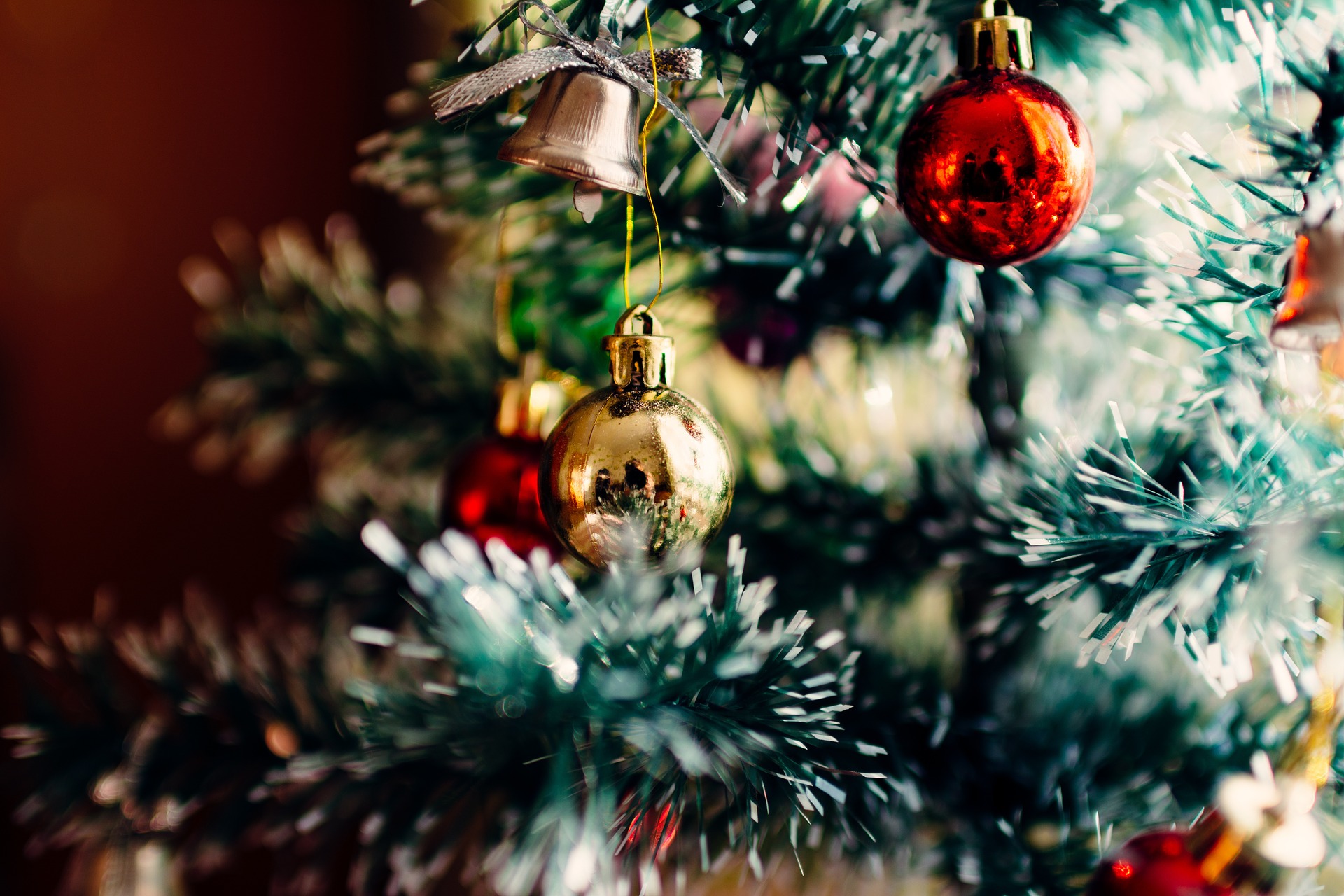 Christmas trees are a relatively recent introduction to the British Christmas tradition.  Their introduction to Christmas celebrations can be traced back to Southern Germany in the seventeenth century. There is even a legend that the first Christmas tree was erected by Martin Luther. The British tradition can be traced back to Queen Charlotte, the wife of King George III. She came to England from Mecklenburg-Strelitz in 1761 and brought with her the tradition of erecting and dressing a yew branch and distributing presents from the branch to family and friends. In 1800, Queen Charlotte had a complete yew tree erected and decorated and placed in a central location in the drawing-room of Queen’s Lodge. This tree led to a fashion for decorated Christmas trees to spread around the upper classes. These trees were candle lit and decorated with trinkets and baubles and surrounded with presents. In 1840, Prince Albert imported Christmas trees from his homeland of Coburg, but it is only from 1845 that the tradition of decorating Christmas Trees spread throughout the United Kingdom. The impetus behind this new form of mass consumption, or Christmas Tree fashion, was the media and specifically the coverage provided by the Illustrated London News. Each year this newspaper described Prince Albert’s Christmas Trees providing an illustration and this encouraged the wider adoption of trees as one part of the British Christmas.

In a piece entitled “The Christmas Tree”, published in Household Words in 1850, Charles Dickens described the Christmas tree as “that pretty German Toy” that was “brilliantly lighted by a multitude of little tapers; and everywhere sparkled and glittered with bright objects”. The 1848 account in the Illustrated London News describing the Royal Household’s trees is particularly illuminating for two reasons. First, Queen Victoria commanded that a Christmas Tree be prepared for the Royal Children and that similar trees be arranged in other apartments of the Castle for her Majesty, his Royal Highness Prince Albert, her Royal Highness the Duchess of Kent, and the Royal Household. These were young eight feet high fir trees with six tiers of branches. This seems to suggest that every household needs much more than a single Christmas Tree – one for each adult and one for the children. Second, the Victorian Royal Trees were erected and decorated on Christmas Eve and removed on the Twelfth night.  This is interesting in that every year Christmas trees are erected much earlier. This year, I noticed the first Christmas Tree on 1 November.

The environmental analysis reveals that the impacts of artificial versus real trees are similar but that the impact on ecosystem quality is better for artificial trees, but that real trees are better for reducing climate change and preserving resources. Nevertheless, the environmental impacts of either type of ‘tree’ are outweighed by the impacts of the electricity used for lighting combined with the carbon embedded in tree ornaments and other decorations and presents. This also needs to take into consideration tree miles – or the carbon and energy expended in acquiring trees, decorations and not forgetting Christmas presents and their logistics including the recycling of wrapping paper. A key element that must not be overlooked is the carbon and energy expended in the manufacture of tree stands.

Christmas Trees are an important but niche industry. Their seasonal nature produces problems for manufacturers, growers and retailers. But, there is no question that there is a reasonably large industry producing local jobs for local people with important local economic impacts. The peak Christmas Tree season is arguably December, but retailers, stylists and the media have been encouraging early adoption of Christmas Trees and well before Christmas Eve. This is all about business, margins, profit or the bottom line. Christmas Eve is no longer associated with the decoration of Christmas Trees but increasingly with Christmas Eve boxes. The origins of the Christmas Eve box needs to be researched, but for the UK this is a relatively recent phenomenon reflecting the on-going commercialisation or commodification of Christmas and the transfer of traditions between countries. Such boxes are sold as a Christmas Day taster or introduction to Christmas. They might be considered as a charming addition to the UK Christmas repertoire or just another example of the on-going deepening of the commercialisation of an annual religious and cultural celebration. The key question to consider regarding Christmas Boxes is whether they disrupt what is arguably, for some, the most exciting night of the year.

Growing and selling real Christmas Trees is a long-term business. Growing the most popular six feet tall Christmas Trees can take ten to twelve years – a decade in which capital is invested without any return and which time and money is spent on pruning, fertiliser and deer-proof fencing. The Christmas Tree season commences with an inspection of the tree plantations in June and July to select which to harvest and then individual trees are selected and tagged in August and September. They may be cut in September. It has been estimated by the British Christmas Tree Growers Association that around 7 million real Christmas Trees are purchased annually in the UK with sales accounting for around £280m; around three quarters are grown in the UK and only about 10% of British grown trees are exported.  Like any commodity, the economics of Christmas Trees reflects demand and supply and this is unpredictable. Supply can be impacted by the growing season limiting supply and increasing prices. This year the low value of the pound means that tree wholesalers will be avoiding imported trees and focussing on home grown trees. There is always the important question of Christmas trees and “hedging” or, in other words, the use of financial hedging to underpin imports of trees to the UK.

Christmas tree producers can be divided into two types. First, there are farmers producing some Christmas Trees as a sideline to their farming business. This reflects another form of farm diversification – albeit a very seasonal form of diversification. Second, there are commercial growers who specialise in growing and selling Christmas Trees. Jadecliff, for example, is a family-run business established in 1984, to provide Christmas Trees to the trade. This company has developed, grown and diversified and includes three related businesses: wholesale tree supplier; importer of candles and the management of the Christmas experience at Marldon Farm, Devon, which includes a visit to Santa in his tree house grotto, a walk through Santa’s village, reindeer and a visit to the Marldon Farm café. The latter has become a tourist experience highlighting that, for some consumers, purchasing a Christmas Tree has become part of the rapidly deepening experience economy. Many of the trees sourced by companies like Jadecliff are grown in the UK, but trees are also imported from Scandinavia, Germany and Denmark.

What does all this mean? It means that there are at least two Christmases. First, there is the annual religious and cultural celebration which has very little to do with commodification, and much more to do with what can be described as the spirit of Christmas. Charles Dickens, in his Christmas stories – another example of Christmas commodification – explored this spirit of Christmas and Christmas Spirits. “A Christmas Carol” (December 1843) concludes by stating that “it was always said of him [Scrooge], that he knew how to keep Christmas well, if any man alive possessed the knowledge”. Second, there is the Christmas that starts in October, perhaps September, and ends with the January sales. It is this second Christmas that leads to substantial economic multipliers and also perverse impacts related to the seasonable nature of Christmas consumption and production. It is interesting to speculate on this second Christmas as this reflects an on-going and very sophisticated process of commodification that goes hand-in-hand with the media industry. Thus, Christmas in 2017 is more about styles, fashions, cosmetics, trends, toys, gifts, food, alcohol and technologies that are popularised by the media industry including social media.

The on-going commodification of Christmas and its capture by capitalism is a well-established but on-going process and it is a process that, in part, is driven by the media industry. Every time you see a Christmas Tree in the UK consider the role played by Victorian newspapers from 1845 in the development of this new fashion. The commodification of Christmas should be understood and appreciated for what it is – the application of capital and supporting or affiliated infrastructure to a festival for the purpose of creating profit. Linked to this profit-making is a process of job creation, both temporary or precarious and permanent. It is important to appreciate and enjoy the ongoing relationship between the media and advertisers as Christmas is positioned and repositioned as a consumer/producer experience. Each day, during the peak Christmas season, comes with moments to savour and enjoy. Thus today, The Guardian has a special feature entitled “Time to shine! How to get perfect party eyes this Christmas”. This is evidently an important issue and is one that I had not fully appreciated. But this piece resonates with my last blog that explored the emergence of the “highbrow, eyebrow economy”. Christmas eyes evidently require brow products to give a fuller and more defined shape. This seasonal look requires an expenditure of £189.99 on brow and eye cosmetics, but what about all the other cosmetics required to create a perfect Christmas party face? Christmas is big business, but every consumer, or household, has the option to decide what to consume and perhaps more importantly “how to keep Christmas well” and to create their own Christmas traditions.

This blog was written by Professor John Bryson, City REDI.