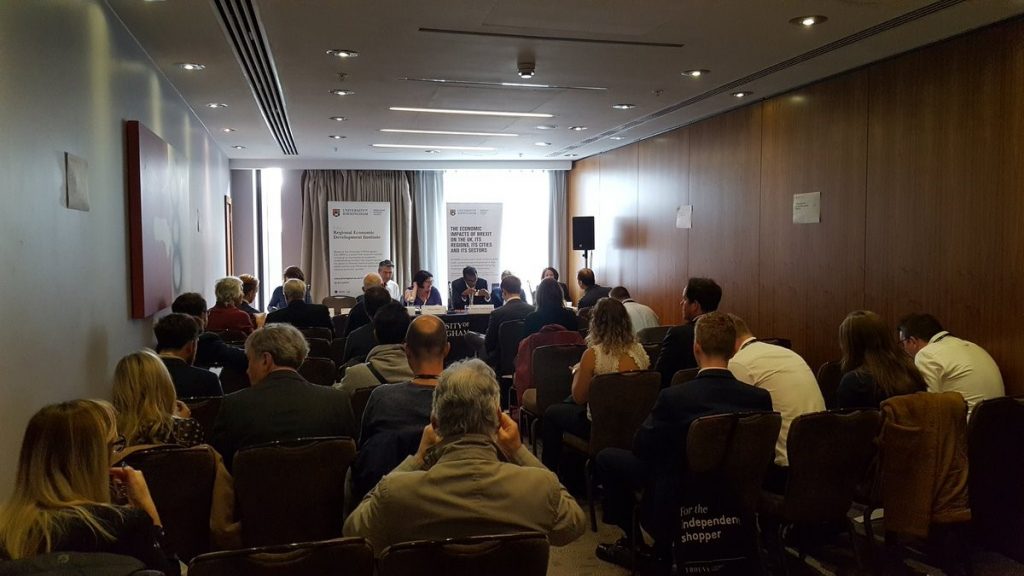 On the 24th of September, City-REDI held a fringe event at the Labour Party Conference on ‘Understanding and mitigating the risks of Brexit at local level’. The conversation ranged from the impact on places that voted Leave, how Brexit will affect the UK’s productivity, and what the future of skills and migration looks like after Britain leaves the EU. Our panel was made up of the following experts:

Jenny Chapman, the MP for Darlington as well as being the Shadow Brexit Minister, told the audience that the work City-REDI is doing is critical for mitigating the impact of Brexit in the UK’s regions. The headline finding is that the economically-weaker places that voted more strongly for Brexit are also more exposed to the economic risks it poses, especially those in the Midlands and the North of England. The risk is lower in wealthier and largely Remain-voting regions of the UK. You can find out more about the work City-REDI is doing to assess the effects Brexit will have on the UK’s regions, cities and sectors by clicking here.

The panel was agreed that a no-deal Brexit would have a significant impact on the UK’s economy. As Professor Anand Menon, Director of the ESRC UK in a Changing Europe initiative noted, ‘there are too many people that think to get what you want, you have to crash the bus to fix the problem’.

From a regional perspective, the panel agreed that it is clear that Brexit is connected to the problems that have faced English regions for a long time. These include regional and social inequality and low productivity, which certainly pre-date Brexit but are also largely unrelated to EU membership. Striking a more optimistic note, Professor Menon called Brexit the “Overton Window” that allows a unique moment for progression on these issues and the potential for innovative public policy responses, saying that ‘had we voted to Remain in the EU, it is likely that we would have built Crossrail 55 before considering a cross-Pennine railway’.

However, the UK’s sub-national governance system appears to be largely unprepared for the post-Brexit challenges, with many Brexit-response initiatives and activities being largely ad hoc and uncoordinated between localities, reflecting the widespread policy paralysis in the UK institutional system. Central government has as yet not organised any Brexit-response activity to tackle these problems at the sub-national level. The shock that Brexit represents may yet help us to think of public policy in innovative ways, and it might also lead to calls for a higher level of devolution away from the centre of power which would enable regions to overcome their local challenges.

Politically, the referendum has been a shock to our system. Brexit may help us to look afresh at problems in the UK, in particular, those related to regional and social inequality and low productivity. It may also call for a higher level of devolution, which will allow places to overcome their local challenges in a post-Brexit UK.

Disclaimer:
The opinions presented here belong to the panel rather than the University of Birmingham.

Professor Ortega-Argilés has also published a blog on her research and Party Conferences, which can be found on the Birmingham Business School Blog.

1 thought on “City-REDI at the Labour Party Conference in Liverpool: Understanding and Mitigating the Risks of Brexit at Local Level”