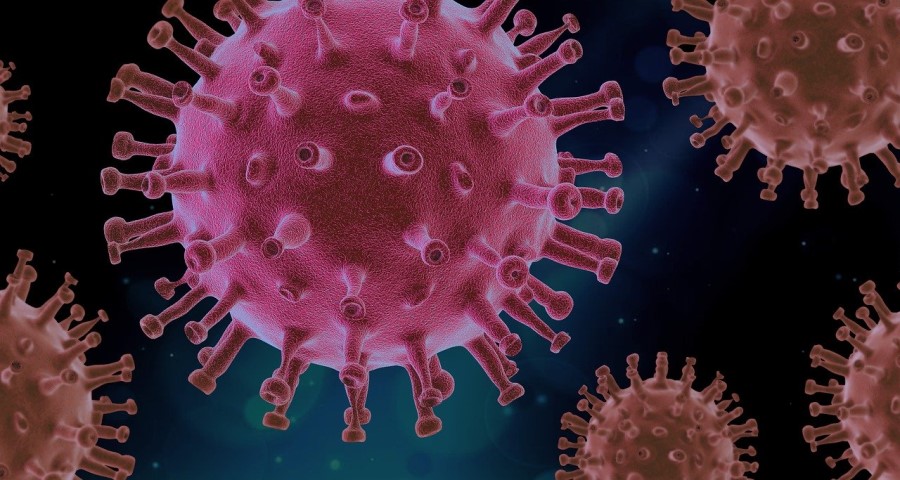 How can I help? That is the question I’ve been asking myself ever since I knew COVID-19 was approaching the UK. And it finally arrived, as expected, but it caught us unprepared, even though we have been observing speechless what was happening in many other countries around the corner, like Italy (where I have many friends) or Spain (my home country). I am not a doctor, at least not the kind somebody would call for in a public space, so I would be of no help at all in the frontline when the situation gets worse. I thought about volunteering to buy food for people that cannot leave their houses, but since last week my wife had a cough and I have a sore throat, we so we have been in self-isolation for 7 days at least (now 14 days). “There should be something I can do”, I kept thinking.

I am not bad at measuring economic exposure to shocks. Let’s do that, let’s try to obtain some results on the potential regional impacts of COVID-19 for the West Midlands region [1] by means of studying dependencies and some economic accounting exercises. Who should be the target of public help in economic terms? Which kind of sectors and activities are more threatened by the new economic circumstances? The economy is like a human body; when it’s ill, you have to prescribe it the right treatment, pushing the right buttons once the winners and losers of each shock are identified. No model can address properly big economic shocks like the one we are going to suffer in the following months. However, it’s better to try and get some indications based on pre-shock production structures than to guess these effects blindfolded.

The numbers that I provide here are important in helping us understand who will be at economic risk during the coming months. They are indications in terms of scales and magnitudes but please do not read them as exact numbers.

In a series of blogs regarding the economic effects of disruption, I identify three different ways in which the coronavirus COVID-19 could impact the West Midlands economy:

This first blog will look at sectoral effects and then I will try to check the exposure in terms of households by different socioeconomic characteristics.

1 – Closing the borders: Trade and the effects through supply chains

One of the first impacts we could think of when we saw the outbreak of COVID-19 was that it can harm supply chains when some industries in other countries stop producing (and stop importing products from the West Midlands, and selling products that the West Midlands industries need for producing their own). In the last two decades, firms have been exploiting the advantages of fragmentation by changing the geographical sources of supplies and destinations for markets. Subsequently, activities that were local are increasingly broken up into different tasks that have been re-distributed across regions and nations.

Using data from EUREGIO (Thissen et al., 2018) [2] for the year 2010, we can observe how dependent the West Midlands Economy is from other regions outside the UK in terms of imports and exports (both considering goods and services). Starting from the import dependency, The West Midlands shows a slightly higher share of imports from the European Union than the UK average (13.3% of the West Midlands intermediate inputs used in the production processes come from European regions). In the case of the Rest of the World, it shows a smaller dependency (6,3%). 80.4% of the production uses intermediate products produced in the UK. This can tell us that, at the beginning of this crisis (December and January), when the virus was mainly affecting Asian countries, the West Midlands economy was not suffering many disruptions in the supply chains of its industries. The second stage (February and March), when the COVID-19 spread into Europe, was more damaging for the region. Of course, we are just focusing on direct exposure at this moment.

As this is a global pandemic affecting several countries at the same time, it is interesting to see in more detail where these inputs come from. Table 1 shows the main origins of the West Midlands intermediate imports.

Table 1. Origin of the inputs imported by the West Midlands economy (non-EU countries).

China, the country most hit by COVID-19 at this moment, represents 13.6% of the total Non-EU imports made by industries in the West Midlands. However, this percentage varies quite importantly by sectors. China is the origin of 54.3% of the textile imports from non-EU countries; and 47% of the electrical, optical, and transport equipment imported by the West Midlands region. These sectors had their supply chains seriously impacted during the first phase of the outbreak.

Regarding exports, the dependency would be in terms of where the West Midlands sells its production. As can be seen in Figure 1, the West Midlands Economy sells its products abroad to various destinations. Manufactures, primary products, construction, and real estate and other business activities have the EU regions as their main destination, while most of the services and textiles products go primarily to Non-EU destinations. Food and beverages; and coke, petroleum and chemicals industries are particularly dependent on the EU regions’ demand.

Figure 1. Destination of the exports from the West Midlands economy (outside the UK). 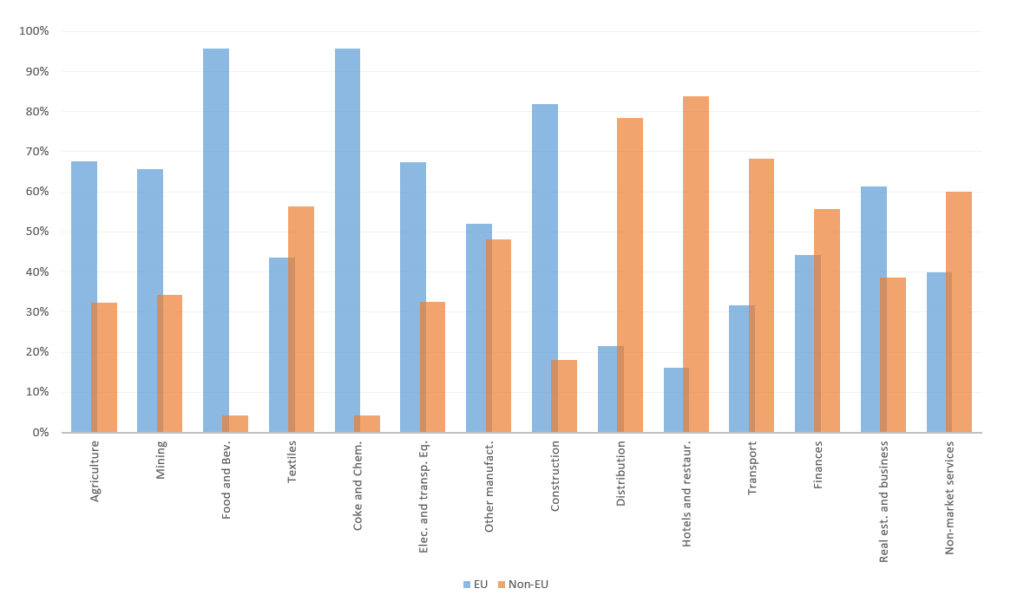 Again, by non-EU countries, the United States is the main purchaser with 45.5% of the total exports. The Rest of the World represents the 36.0% of the sells to outside the UK and EU. China represents just 2.0% of the total exports to this set of countries. This means that the trade deficit between West Midlands with China is quite large (in 2010, the total imports from China were £ 553 million while the exports were £60 million, producing a deficit of £493 million).

Contribution of foreign exports to the regional economy

Table 2 summarizes the main results obtained. A simulation like this one tells us that foreign exports in a quarter represent close to 6.5% of the total annual domestic output (for 2016 values), 6.0% of the Gross Value Added (GVA) [4] and 5.6% of the employment (68,000 jobs).  As can be seen from these figures, the sectors affected have higher productivity than other sectors in the economy (i.e. the employment is less affected than the output). This can be expected as it is normally accepted in the related literature that the most productive firms are the ones that can compete in the international markets.

Table 2. Simulation 1 – Contribution of foreign exports to the West Midlands economy (Millions of £ and number of jobs).

If we take a look at the main sectors exposed by this, manufacturing industries are widely affected. That is the case of the machinery and equipment sector (SIC code – CK), which would see 18.8% of its activity related to foreign exports. Manufacturing of transport equipment (SIC code – CL), central to the economy of the region, mainly sells its products for foreign markets (18.6%). Of the top-ranking sectors related to foreign exports, we find administrative and support service activities (SIC code – N) where 22.1% of its activity would be directly and indirectly affected by a shock in foreign exports in general. In terms of the number of jobs, close to 15,000 employees in the distribution and repairs sector depend on foreign exports. Similar figures appear for the professional, scientific and technical activities.

Of course, this is not a forecast of what would happen when borders close. This just shows the direct and indirect economic contribution of foreign exports, to give us an idea of the main sectors exposed. It does not consider the possible substitution in the destinations of West Midlands products, that exporting services are not totally shut by reducing the possibility of travelling to other countries, or that there could be changes in prices (although it could be discussed if this crisis is a short-run disruption or not).

Read the next part of this blog series:

The Economic Exposure to COVID-19 (Part II): The Situation in the West Midlands Region – Demand for Health Services: The Invisible Indirect Workers

[1] In this piece when we refer to the West Midlands Economy we are considering the NUTS2 classification (UKG3) that includes Birmingham, Solihull, Coventry, Dudley, Sandwell, Walsall and Wolverhampton regions. An area with a population estimated of 2,916,458 inhabitants (2018) and that corresponds to the West Midlands metropolitan county.

[3] The SEIM-UK model is a Multiregional Input-Output model for the UK with 2016 as the base year developed at City-REDI Institute at the University of Birmingham. Find out more.

[4] GVA and Gross Domestic Product (GDP) are almost analogous. The difference between them is that GDP normally is presented at purchases prices and GVA at factor cost or basic prices.

2 thoughts on “Economic Exposure to COVID-19 (Part I): The Situation in the West Midlands Region – Closing the Borders”