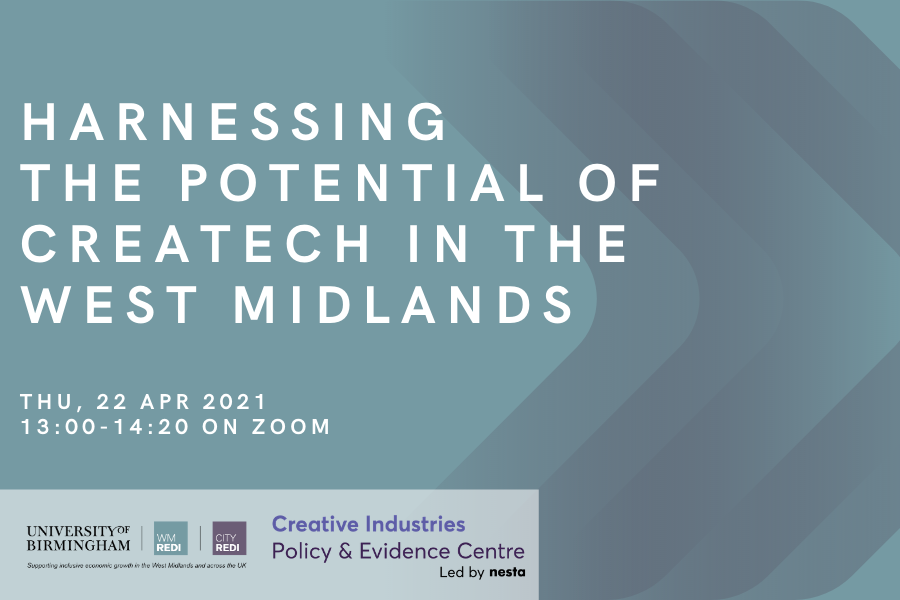 Creative industries can be a catalyst of innovation across all sectors, enabling transformative new products and services which can drive regional economic growth, wellbeing and quality of life. In particular, the integration of technology and creative industries (‘Createch’) can satisfy consumer demands and solve societal challenges. Perhaps harnessing virtual production, VR or AR and theatre practice to areas as diverse as mental health training, dementia support and pain control.

Given the potential of this emerging creative sector, the West Midlands is keen to be a thought leader and early adopter of Createch to maximise the economic and social value it can bring to the region’s people and its perception on the national and world stage.

How can the West Midlands harness the potential of Createch in order to benefit its economy, the wellbeing of its citizens and the region’s perception on the world stage?

The webinar will provide a platform to discuss the impact of creative industries and Createch on local economies as well as the policies that can foster growth, raising the region’s profile as a Createch cluster. In particular, it will seek to start the discussion on answering a range of questions such as:

For questions and comments regarding the event and the Institute’s work on creative industries please get in touch with Tasos Kitsos (a.kitsos@bham.ac.uk) or Twitter: @Tasos_Kitsos. 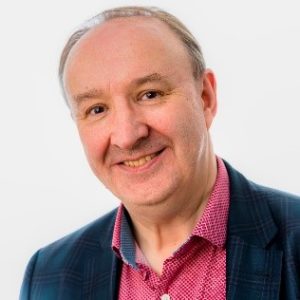 David Furmage is Creative & Cultural Senior Policy Lead at Greater Birmingham & Solihull Local Enterprise Partnership (GBSLEP). He is also West Midlands regional lead for the creative sector within the context of local industrial strategy and works closely on regional cultural policy and placemaking. He has previously worked as policy and strategy lead for the Digital & Creative sector at the Regional Development Agency in the West Midlands. David has recently received an MA in Creative & Cultural Policy. Before this he ran a three-year EU project developing pan-European policies around creative cluster excellence, optimising sector intermediary’s effectiveness and developing innovative business support policies. Before his public policy work, David ran several creative businesses that evolved from television, through interactive media to learning systems and artificial intelligence. He started his career working in television, both BBC and ITV, as an editor, working on drama, documentary, and news output. 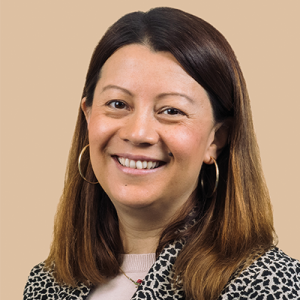 Jessica Driscoll is the Head of Immersive Technology at Digital Catapult and provides technical leadership across all immersive technologies, including virtual, augmented, mixed reality as well as new forms of human-computer interface and advanced data visualization. She has experience working with a wide variety of immersive technologies from training and development applications to entertainment in a range of industries including NGO’s, Oil & Gas, Aviation, Pharmaceutical and Construction to name a few. She has also worked in BBC R&D on a range of award-winning CR&D projects including testing virtual production workflows and capacity building in the immersive industry in the UK. She has an MA in Digital Culture and Technology and is interested in the interplay between humans and technology and is also an award-winning VR Producer on work that explores these themes. 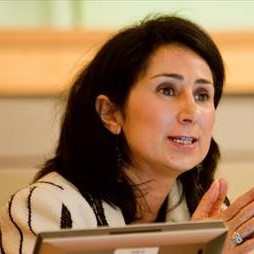 Professor Lisa de Propris is a Professor of Regional Economic Development at the Birmingham Business School. She has expertise in manufacturing, industry 4.0, technological change, service clusters/districts, creative industries, regional economic development, industrial policy and EU cohesion policy. She has completed an H2020 project on Industry 4.0 called MAKERS. She has extensively published on these themes in academic journals and books, as well as presented at international conferences and high-level meetings, including, EU Commission and  OECD. Her recent publication is De Propris L. and Bailey D. (2020) Industry 4.0 and Regional Transformations, by  Routledge (open access) 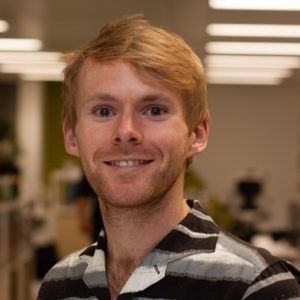 Dr George Windsor, Head of Insights at Tech Nation, supports ambitious scaling entrepreneurs to accelerate their growth through providing new data and evidence for decision making. Recent reports and research include the Tech Nation Report 2020, Jobs and skills report, and Scale Ratio – on the growth stages of companies in the UK digital tech ecosystem. Formerly of Nesta, George was also a researcher, focusing on migration and entrepreneurship at Loughborough University. 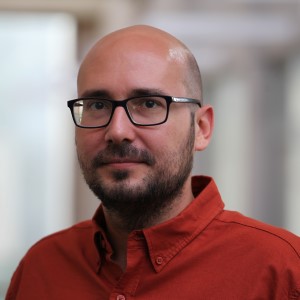 Dr Tasos Kitsos is a regional economist specialising in local economic resilience, university impacts on regional economies; and the digital and creative economy. He is a Research Fellow at City-REDI/WMREDI, University of Birmingham. He is currently leading WMREDI’s work on the cultural and creative sector and is a member of a multi-institutional research project on estimating the local economic impact of creative industries funded by PEC. 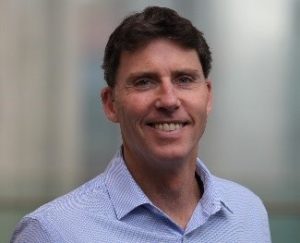 Professor Simon Collinson is a Professor of International Business and Innovation and Director of both the City-Region Economic Development Institute (City-REDI) and WMREDI at Birmingham Business School, where he was Dean 2012-2016. He is also currently Deputy Pro-Vice-Chancellor (DPVC) leading on Regional Engagement at the University of Birmingham. Simon was Chair of the Chartered Association of Business Schools and a member of the ESRC Council and the GBS Chamber of Commerce Council.

His research and consulting focuses on multinational firms, international management, trade and foreign direct investment, productivity, innovation, competitiveness and regional economic growth. Simon has secured over £15 million in research awards. As well as publishing in leading journals, including the Journal of International Business Studies, Research Policy, Organisation Studies and Business History his research has featured in the Financial Times, Sunday Times, Wall Street Journal, BBC Radio 4, and the New Statesman. He is also the lead author of one of the most widely used International Business textbooks (8th Ed., 2020). He has extensive experience of consulting and executive teaching at Warwick, Henley and Cambridge Business Schools.

The Creative Industries Policy and Evidence Centre (PEC) works to support the growth of the UK’s creative industries through the production of independent and authoritative evidence and policy advice. Led by Nesta and funded by the Arts and Humanities Research Council as part of the UK Government’s Industrial Strategy, the Centre comprises a consortium of universities from across the UK (Birmingham; Cardiff; Edinburgh; Glasgow; Work Foundation at Lancaster University; LSE; Manchester; Newcastle; Sussex; Ulster). The PEC works with a diverse range of industry partners including the Creative Industries Federation.

Find out more about the PEC.

WM REDI, the sister institute of City-REDI, will soon be established in the University of Birmingham’s Exchange building, in the heart of Birmingham, to support inclusive economic growth in our city-region and regions across the UK.

WM REDI is a collaborative partnership with regional stakeholders including:

Other partners include Birmingham City Council and the seven metropolitan Local Authorities in the West Midlands, the Midlands Engine and the University of Warwick.

WM REDI has been made possible by a major award from the Research England Development (RED) Fund, together with matched funding from the University of Birmingham and its regional stakeholders.

Find out more about WM REDI.