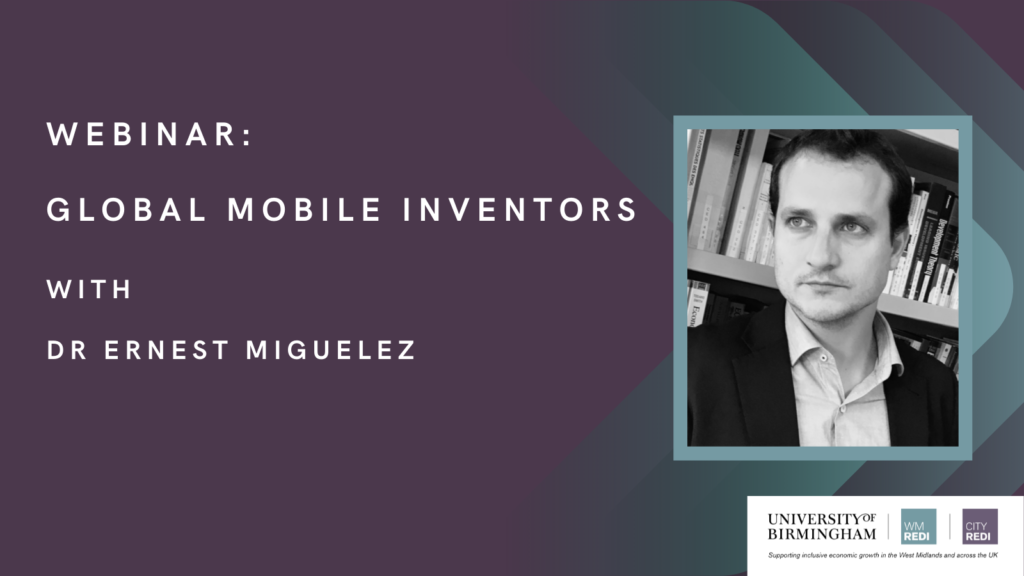 On 2nd March 2022, City-REDI held a seminar with Ernest Miguelez from the University of Bordeaux. (co-authored with Dany Bahar; Prithwiraj Choudhury and Sara Signorelli)

The paper explores the idea of Global Mobile Inventors (GMI) and answers questions such as:

Global Mobile Inventors are understood as inventors who patent in more than one country throughout their career (and hence have moved across borders).

The paper uses data from PatentsView, a data visualisation tool maintained by the Office of the Chief Economist at the USPTO (US Patent and Trademark Office) and partners which contain the universe of patents granted by the USPTO from 1976. The paper uses patents with application dates between 1970 and 2015, including 7.5m granted patents belonging to 3.5m inventors. The analysis relies on IBM Global Name Recognition (GNR) system which contains 750k full names and their respective computer-generated variants.

The paper brings interesting evidence that contributes to the literature on the globalisation of knowledge production.

The descriptive evidence shows that GMI excels in terms of patenting performance (in terms of quantity but also quality) and career resilience in comparison with other types of inventors. GMIs are significantly more present in the first stages of the development of new technological classes in their destination countries.

The econometric analysis shows that there is an important role of immigrants and returnees’ inventors in the diffusion of knowledge. The association is 50% stronger in developing countries, showing that inventors that return to their developing countries after having spent time in a developed country may be playing an important role. These effects persist when looking at pairs of technologies.