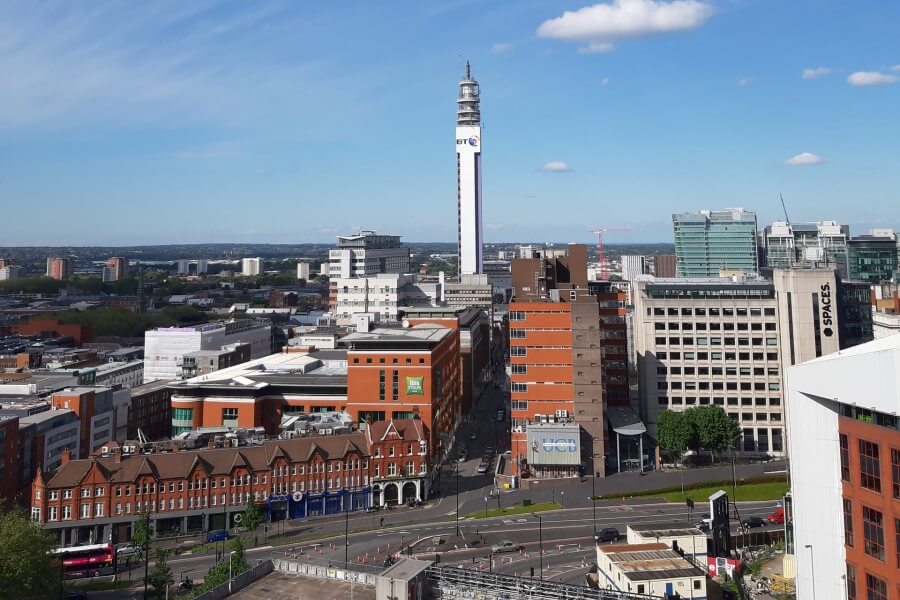 The annual Birmingham Economic Review is produced by City-REDI, University of Birmingham and the Greater Birmingham Chambers of Commerce. It is an in-depth exploration of the economy of England’s second city and a high-quality resource for informing research, policy and investment decisions.

This post is featured in Chapter 4 of the Birmingham Economic Review for 2021, Connected Places: Foundations for Growth.

The impact of high-level air pollutants

High levels of air pollutants have been attributed to childhood asthma incidence rates and even to death in some areas in the UK.

Petrol and diesel vehicles emit a wide variety of pollutants such as particulate matter (PM), black carbon, nitrogen dioxide (NO2), sulphur dioxide (SO2), and carbon monoxide (CO) which are linked to major health problems such as cancer, asthma, stroke and heart disease, diabetes, obesity, and dementia.

Air pollution in the West Midlands

In the West Midlands, road traffic is one of the main sources of air pollution and measurements generally show levels above guidelines set by the World Health Organization (WHO), Birmingham has one of the highest levels of NO2.

Apart from environmental and human costs, there are economic costs from exposure to air pollution that are pressing the health system. For instance, in England, the health cases attributable to exposure to small particles (PM2.5) and NO2 costs to the NHS and social care about £76.10 million and £81.06 million respectively. In the West Midlands, air pollution affects close to 2.8 million people, reducing average life expectancy by up to 6 months, and costs an estimated £860m per year.

To tackle these problems, the UK government targets new cars and vans to be zero-emission by 2040 and has developed a Clean Air Strategy. For instance, the adoption of Clean Air Zones to tackle poor air quality in the UK at a city level.

A Clean Air Zone (CAZ) is an effective way to reduce pollution, therefore, the implementation of the Birmingham Clean Air Zone in June 2021 is a firm step to tackle road-transport related air pollution in the city centre. However, many local authorities have found air pollution controls challenging to introduce due to the lack of public and political acceptance from businesses and residents.

To overcome these challenges the following suggestions might be important to consider.

First, to raise awareness by providing information about the success in reducing air pollution in other cities. As well as provide clear information about the exemptions for individuals and businesses and the extra support available. A business survey in Birmingham found 64% were not aware that support is available for businesses and 76% wanted general information on the CAZ. Therefore, local government should communicate effectively the Government’s Clean Air Fund to help small and medium-sized enterprises operating within the CAZ area as well as people self-employed. For instance, using public campaigns on radio, television and the internet to inform people. As well as, through the continuous organisation of workshops and events with the support of institutions such as the Chamber of Commerce.

Second, these programmes can be successful only when are combined with other actions. For instance, although it is true that the CAZ can encourage the replacement of old vehicles, and potentially reduce traffic levels in certain zones, it is essential to provide transport alternatives and implement new infrastructure.

Third, research shows that people’s perceptions and attitudes play an important role in accepting these programmes. For instance, perceptions about the cost, procedural fairness, and efficacy of the scheme affect people’s attitudes. Therefore, to increase people’s confidence, effective estimation of the cost as well as transparent communication in the planning process is necessary.

Taking action to improve air quality at the city level would require strong leadership and build strong collaboration between local government, academia, industries, firms and organisations representing interests of businesses to catalyse the opportunities that arise from the CAZ and to reduce the potential negative impact to business and individuals in Birmingham. This can be achieved by increasing understanding of the areas of opportunity and the support available. However, firms and businesses can also play an important role in improving air quality as well, by influencing more sustainable behaviours from their employees. For example, adopting corporate responsibility and adopting schemes such as “cycle to work”, “car-sharing”, “car club” and “carpooling” as well as promoting flexible working.