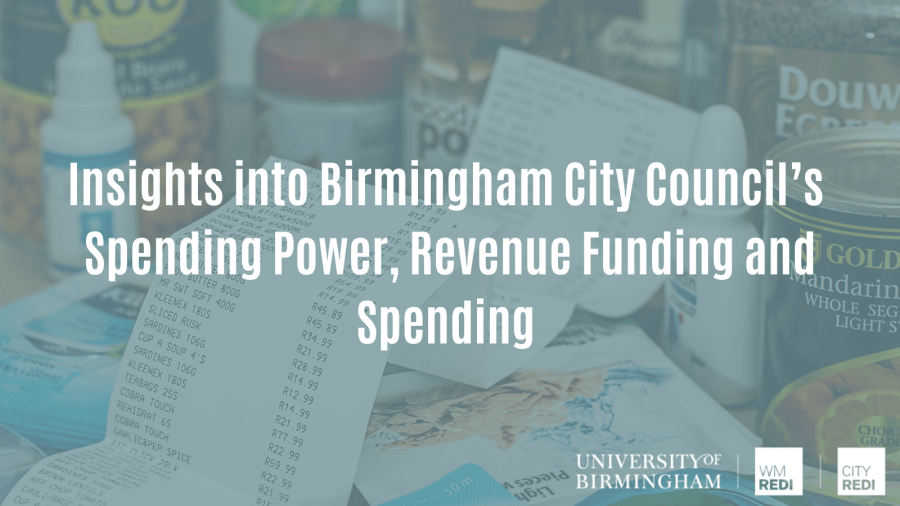 This project began when Stan’s Cafe approached City REDI for help with developing an educational and statistically accurate play, based on Birmingham City Council’s budget. 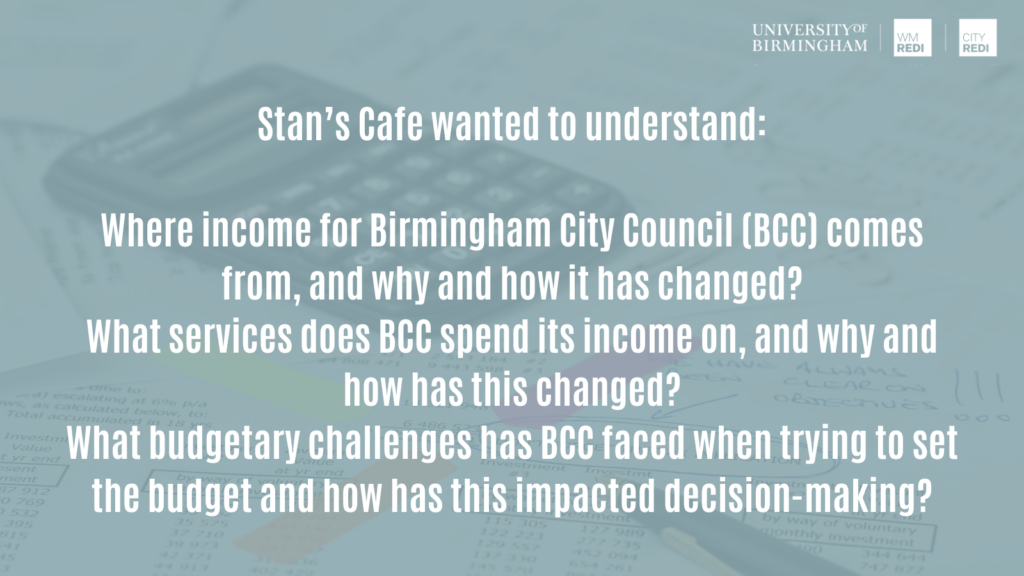 Our report aims to answer these questions, by examining and analysing changes in Birmingham City Council’s income and expenditure over the decade between 2010/11 and 2019/20. It reviews and evaluates budgets and financial plans between 2010/11 and 2019/20, alongside reviewing evidence and analysis from supporting research from the National Audit Office (NAO). We focus on trends relating to the revenue funding for and expenditure on services that local authorities, such as Birmingham City Council, have to provide.

The financial data used in this report, around income and spending, was principally drawn from the 2021 National Audit Office (NAO) Financial Sustainability of Local Authorities Visualisation between 2010-11 to 2019-20 and Birmingham City Council’s (BCC) Budgets for 2010/2011 and 2019-2020. The data in the NAO report is based on data releases collected by the Department for Levelling Up, Housing and Communities, on how local authorities spend their money over the financial year.

This data was used instead of the financial data within BCC budgets, as it was difficult to compare across BCC’s budgets. Difficulties in comparing budgets across multiple years arose from significant changes in spending priorities, which resulted in the main revenue spending streams changing over the period.

In addition, BCC budgets were used to understand the policy context and budgetary pressures that BCC had faced, when trying to set budgets over this period. This gave an extensive insight into how budgetary pressures had impacted BCC, and thus how this has impacted on decision making.

Government Funding has seen such a significant decrease, due to austerity policies introduced by successive governments, which have slashed local authority budgets BCC alone had to make austerity cuts of £736 million.

We found that government funding had become extremely competitive, with 32% of the funding available to local authorities between 2015/16 and 2019/20 being competitive funding. This has created tensions between local authorities. Competing for the same pots of funding has made it increasingly difficult for councils to work in partnership.

Council Tax income decreased, due to BCC freezing council tax for 3 years between 2010/11 and 2012/13. This saw the value of council tax decrease in real terms, as the Council were unable to raise council tax in line with inflation whilst the freeze was in place.

Also, even though an area may become more or less affluent over time, the council has no power to change council tax bands. Additionally, the Council is restricted by law to a 2% rise in council tax, with BCC to have a vote of the population to increase it above, which of course most constituents are not in favour of. 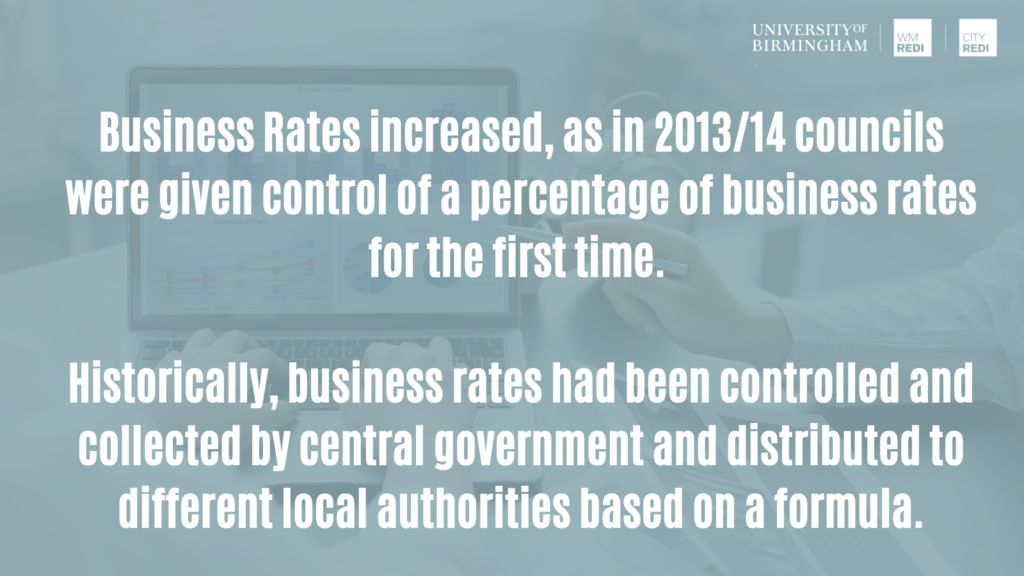 BCC saw a particularly large increase in business rates as it engaged in a trial with other West Midlands Combined Authority (WMCA) local authorities to retain 100% of business rates.

Overall, net service revenue spending for BCC has decreased by 26% between 2010/11 and 2019/20. Of the nine main spending streams on which BCC spends its income, only two streams saw an increase in spending in real terms, as seen in Figure 1. 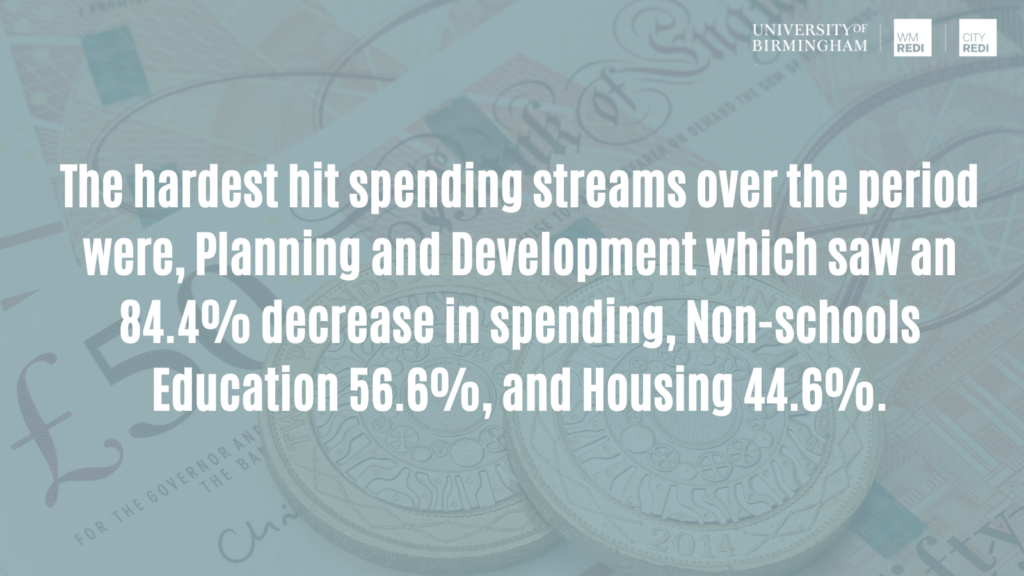 The dramatic changes in funding income over the period have significantly impacted BCC’s ability to fund services, and as a result spending in most areas has fallen over the 10-year period. Largely, statutory services have seen the smallest decreases in spending, with discretionary services seeing the largest decreases. This is likely to be because by law local authorities must provide statutory services, whereas the Council have greater flexibility over providing discretionary services.

Aside from austerity, the BCC has faced other significant budgetary pressures between 2010/11 and 2019/20. The main issues which BCC cited within their budget as a significant pressure were:

Overall, BCC has faced increasing pressures and difficulties when setting budgets over this decade. Austerity and funding changes have vastly reduced the spending power of the council and placed greater pressure on local authorities to pull income from other revenue sources. However, local authorities have little to no control over how either council tax or business rates are implemented. The highly centralised nature of how these funding streams are controlled restricts the council’s ability to actively pursue increasing income through these streams. As central government funding continues to fall, with little change or uplift from other income sources, BCC will face increasing pressure, especially as demand for adult social care increases alongside an ageing population. BCC has also already seen a reduction in spending power of 40.8% per capita over this period. Going forward this will likely continue to increase unless the government reforms funding for local authorities.

Based on the findings in this report, the following policy recommendations are suggested:

In recent weeks there have been significant economic and policy developments, which will exacerbate the issues highlighted in this report.  BCC will be set to now face the following additional budgetary pressures, which will impact budget income and spending over the next few years:

This blog was written by Alice Pugh, Policy and Data Analyst and Abigail Taylor, Research Fellow, at City-REDI  / WMREDI, University of Birmingham.