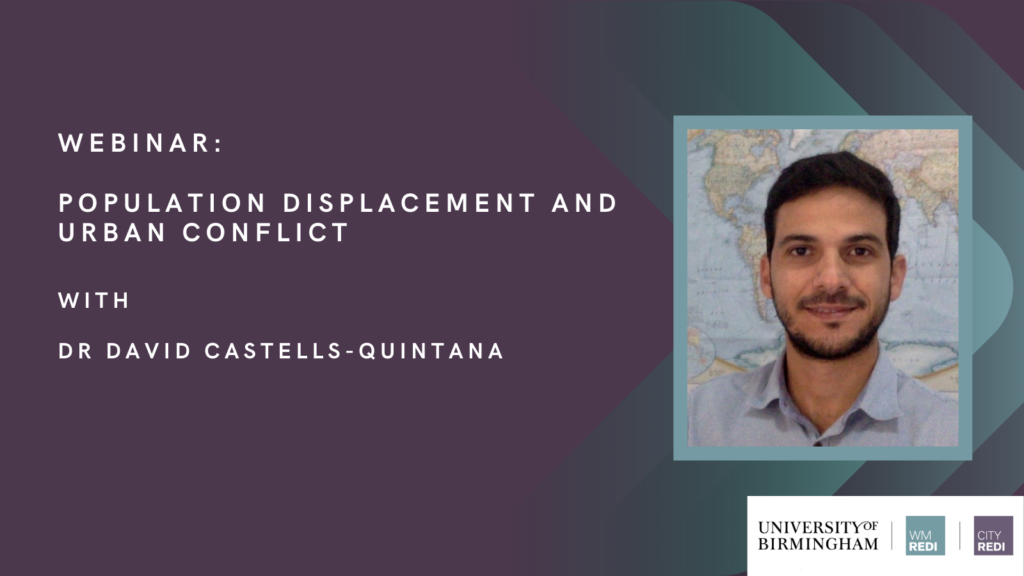 On 16th March 2022, City-REDI held a seminar with David Castells-Quintana from the University Autonomous of Barcelona.

The paper considers the effects of climate change on urban conflict in developing countries. The authors observe two seemingly unrelated trends: Conflict and social unrest tended to be rural phenomena, but are now increasingly affecting cities. At the same time, the number of floods experienced in many areas of the world has increased due to climate change. The two may be related: if there is no adequate protection against floods, this leads to people being displaced from their homes. Often, this means that they leave rural for urban areas. This, in turn, raises the potential for urban conflict, driven by population pressure in those cities on jobs, housing, infrastructure and other resources.

To test this mechanism, the authors construct a dataset from 3,300 flood events worldwide, and city-level observations of more than 9,000 urban social disorder events. The exposure of a city to a flood event depends on the total number of people displaced by the flood, as well as the distance of the city to the flooding. The authors observe that city population increases in exposure to flood events, and that larger cities experience more social disorder episodes.

To test the credibility of the mechanism, the authors use mediation analysis, a type of regression analysis, whereby the explanatory variables – flooding and city population – are added successively, to check whether one explains some of the effects of the other.

The results show that both more floods and a higher city population result in more urban social disorder. As expected, population explains some of the effects of floods, suggesting the mechanism works through the displacement of people to cities. The authors distinguish between cities with a strong pull factor, i.e., which are attractive to migrants regardless of floods, and cities where growth is driven by push factors. Crucially, urban disorder only increases in cities that grow due to push factors.