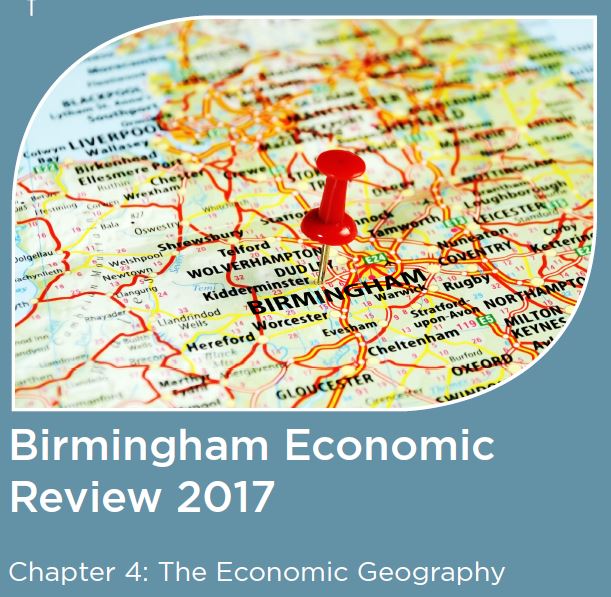 This is a commentary on Chapter 4 of the Review, the Economic Geography:

The Birmingham economy, like all economies, is in a continual process of becoming or, in other words, dynamic change. There are two types of change; quantitative and qualitative. Qualitative change is more important as this is disruptive and potentially can destroy firms, processes and products leading to the emergence of a new economic geography. Quantitative change is about more of the same, for example, more exports, more employment and more but similar economic activity. The difficulty is that economic change is partly path dependent with decisions and investments made in the past influencing current decision-making processes. Thus, Birmingham’s legacy of development in the nineteenth century still influences the on-going shaping of the economic geography of Birmingham, the wider conurbation and also the relationships between Birmingham, the UK and other countries.

There are a number of knowns about the evolving economic geographies of city-region economies. First, investment in local infrastructure and the links to national and international infrastructure assets are critical. In this case, connectivity matters as this is a critical causal factor supporting sustainable and resilient economic growth. Infrastructure investments are one driver behind qualitative change. Second, soft infrastructure is as important as hard infrastructure. Thus, people matter, or more precisely the quality of local management and leadership combined with the capabilities that exist in the local labour markets. Shortage of commercial property is a constraint on economic growth, but shortages of people with the right skills sets and capabilities is a much more serious constraint. It is not a shortage of commercial property that is behind productivity differentials, but problems with skills or capabilities combined with firm-based routines and processes.  Third, place-based narratives matter.  This includes the local, regional, national and international stories that are attached to a place. Thus, what is Birmingham known for – the quality of its business and professional services, the diversity of its retail offer, the creative economy with the City of Birmingham Symphony Orchestra and Birmingham Royal Ballet or its diverse manufacturing base? What is perhaps surprising is how disconnected the citizens of Birmingham are from its local economy. This suggests that economic activity is largely invisible across the city. Is Birmingham best known for its chocolate or legal services or for the design and manufacture of jewellery?

There are two important points to consider. First, is that the on-going success of the Birmingham economy requires an integrated or systemic approach to policy development and implementation. A sustainable and resilient economy is one in which the connections between urban living (natural or green environment, housing, health services, educational services), local and national infrastructure and economic processes are understood as a complex concatenation or a system of systems. This concatenation, or what can be termed the Birmingham Plexus, requires an integrated rather than siloed approach to policy development and infrastructure investment. Second, the media is saturated with coverage of Brexit and this raises the question of ‘what will Brexit mean for Birmingham’? The answer is that no one knows. On the one hand, the relationship between the UK and EU and other countries has yet to be defined. There is much speculation and much is based on looking into the past to predict the future. This process is highly problematic especially if qualitative change is anticipated. And, qualitative change is anticipated, is occurring, as we are living through, perhaps, one of the most disruptive periods in the development of economic activity. Thus, over 30% of the jobs that currently exist in Birmingham will be destroyed over the next 15 years and this destruction will replace people with machines.  The application of artificial intelligence, including robotics, autonomous systems (RAS) and machine learning, to labour is a major moment of displacement and disruption. RAS is transforming employment in manufacturing, business and professional services and public services, but we have only seen perhaps one per cent of the impacts of these new technologies. On the other hand, much of Birmingham’s current economic activity is relatively protected from any Brexit impact. This includes predominantly local economic activities and also those parts of the Birmingham economy that are increasingly dependent on exports to the U.S. and China rather than to the EU.

There are many knowns. The region’s employment structure and firm-level processes will change dramatically with on-going developments in RAS combined with the emergence of new disruptive business models. But the unknown is that we do not yet know the impacts that this will have on employment or the city’s economic geography, but this process of qualitative change has already commenced. A key known is that the city must continue to build upon its strengths. These strengths include a relatively diverse economy, but it is critical that attention is given to maintaining and enhancing the quality of urban living. Ultimately, there are four important drivers behind a successful, sustainable and resilient local economy: connectivity, skills, a supportive place-based narrative and an integrated approach to policy development.  There is a final driver – a city-region must develop a long-term approach to its continued and future development.

This overview was written by Professor John Bryson, Professor of Enterprise and Economic Geography, City-REDI.