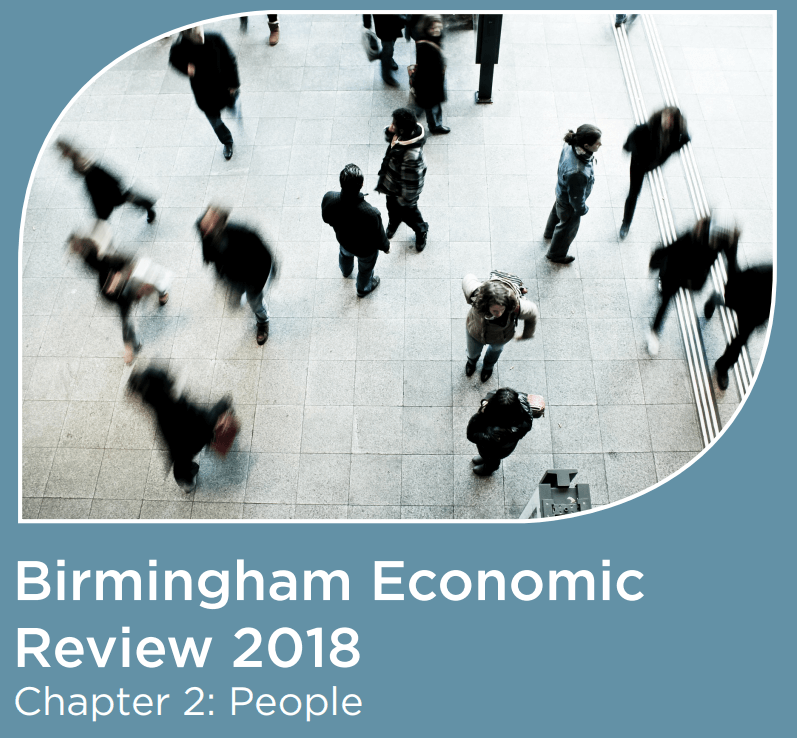 Birmingham is the youngest major city in Europe, with under 25s accounting for nearly 40% of its population. Such a large population of Under 25s in the city is incredibly exciting because these young people will become the workforce of tomorrow and represent a great amount of potential. However, we need to understand this aspect of the city in relation to the current issues it has with skills and unemployment. A young population is only an asset if they are equipped with the skills and opportunities they need to succeed as they enter the local workforce. In practice, this means closing the gap between business and education to help develop a sound skills base, becoming more attractive to graduates so that we retain talent in the city, and working together to address unemployment and skills gaps across Birmingham.

The city’s unemployment and claimant levels are still unacceptably high compared to national averages and the other core cities. However, both decreased from 2016. Another area of concern is economic activity, with 69.4% of those aged 16- 64 in Birmingham being economically active, below the figure for Great Britain. As such, the city has a high proportion of economically inactive residents, at 30.6% compared to the national average of 21.6%. However, over a third of these are students and make a significant positive contribution to the city. Self-employment levels are encouraging at 14.4%, which is slightly higher than the national level. This is particularly promising given the low levels of 30 to 44-year olds living in the city, which is an age group often more likely to be entrepreneurial.

As the details of the UK’s exit from the European Union materialise, it is important to consider how arrangements will impact on Birmingham’s population and employment opportunities. With demand for intermediate and higher-level skills rising and there being a skills gap in the city, Birmingham’s businesses have increasingly met a large share of their labour needs through immigration. Brexit places this labour source under threat. In addition, many migrants from the EU are under the age of 25 and if they choose to leave the UK the assets offered by this young population cannot be realised. The city may also be less attractive to European students, both in terms of study and graduate retention. Migrants from the EU are particularly entrepreneurial and this could explain some of the high levels of self-employment in the city. However, Brexit could result in the loss of some of these businesses and the return migration of their owners, having a negative impact on both the economy and community cohesion. With this in mind, Brexit also threatens the cultural diversity of the city which offers an array of international connections, a variety of languages and a blend of many different cultures.

This commentary was written by Dr Catherine Harris, Research Fellow, Centre for Trust, Peace and Social Relations and an associate of City-REDI.

3 thoughts on “The Birmingham Economic Review 2018: People – Population and Employment”