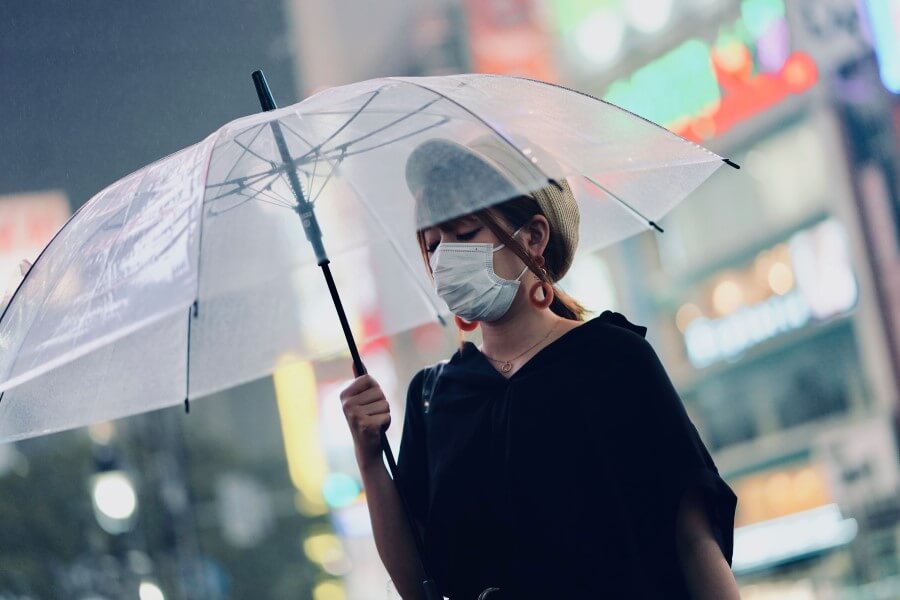 Professor Anne Green looks at the impact COVID-19 is having on the lives of women in the West Midlands, especially those from BAME groups.

In the West Midlands region, women constitute four in five workers in the NHS (79%) and over two in five NHS workers are from a background other than White British. Nationally and regionally the vast majority of social care staff are women: in Coventry, the proportion is 84% which is similar to the national average.

National analysis shows that women dominate in several of the occupations with the closest proximity and highest exposure to COVID-19. Women comprise 89% of nurses, 81% of nursing auxiliaries and assistants, more than 95% of dental nurses and 84% of care workers and home carers. Women from BAME groups are over-represented in the majority of these occupations.

Women in the care sector are amongst the lowest-paid workers. Moreover, 32% of workers in social care in Coventry are on zero-hours contracts and hence their pay could be variable.

Analyses of a survey conducted on behalf of the Fawcett Society underscores the health and economic risk faced by BAME women. 43% of BAME women expected to struggle to make ends meet and to be in more debt than before the pandemic. 24% of BAME mothers reported that they were struggling to feed their children.

Changes in women’s employment in the COVID-19 crisis

The gendered distribution of care responsibilities is having an impact on women’s employment during the COVID-19 crisis. Analyses undertaken by the Institute for Fiscal Studies in May 2020 indicated that at that stage of the crisis 16% of mothers had lost their job permanently (compared with 11% of fathers) and 34% of mothers had been furloughed (compared with 30% of fathers).

Of the women in the West Midlands surveyed in late June 2020 four out of five who were working had seen their job change in some way as a result of the COVID-19 crisis. 28% had seen a change in their hours worked, with two in every three of these reporting a reduction in hours worked. 25% had experienced a change in location of work, with 92% of these reporting that they were working from home. Women working full-time were more likely to report this change than those working part-time. Other changes reported concerned pay and job role. Furlough has disproportionately affected those in economically weaker positions, with one in three respondents from social grades D and E experiencing furlough compared to one in seven from social grades A and B.

Research from the University of Bristol on the gender division of childcare during the COVID-19 crisis published in May 2020 and referred to in the report from the Women’s Budget Group indicated that mothers nationally are doing 50% (or two hours a day) more childcare than fathers.

For most parents the COVID-19 pandemic impacted on usual childcare arrangements, with nurseries and schools closed (and not due to re-open fully until September 2020 in most cases) and informal childcare from family or friends affected by social distancing rules. Institute for Fiscal Studies’ analyses indicate that mothers are facing the brunt of competing demands on their time, with only half of their paid work time uninterrupted (compared to 70% for fathers).

The unavailability and unaffordability of formal childcare – as some nurseries close and incomes for some households are reduced – have particular implications for mothers’ employment. Possible local lockdowns/ a second wave of COVID-19 will likely exacerbate the situation.

The future economic and health challenges facing women in the face of the Covid-19 are underlined by a deterioration in well-being. Women surveyed in the West Midlands were twice as likely to report that their self-confidence had worsened rather than improved over the period from March to June. However, looking ahead, nearly half of women have given some thought to retaining or upskilling in the field of health and social care (47%) in the wake of Covid-19. By comparison, 33% had considered retraining or upskilling in the field of science and technology.

The types of services women in the West Midlands say they want and would use are summarised in the infographic below. Financial advice, employment advice/ support with skills and retraining are particularly prominent. 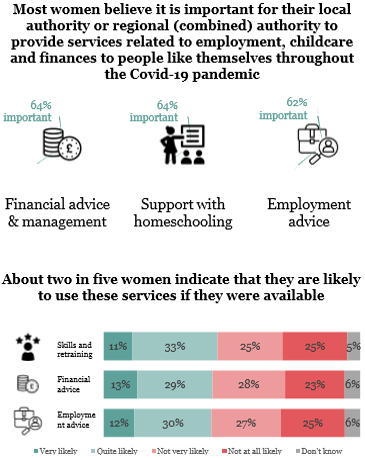