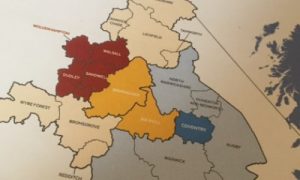 The first panel featured Katie Trout, Chief Executive of the GBSLEP; Anne Lucas, Coventry City Council; Henrietta Brealey, Director of Policy and Strategic Relationships, Greater Birmingham Chambers of Commerce; and Sarah Middleton, Chief Executive, Black Country Consortium. Anne Lucas began by explaining how devolution will work for the economic benefit of the citizens of the Combined Authority with a focus on social justice for growth. She highlighted how devolution is critical, in that the problems faced by the West Midlands are very different to those in Cornwall, etc. One size does not fit all.  Devolution involves taking responsibility and having the finances to go with it. With this in mind she stated that the West Midlands is not currently doing the job it should in terms of productivity. However, this can be solved through devolution: “Give LEPs the power and tools and we’ll do the job for you.” The devolution of funds will see the Combined Authority have access to £40 million per year over 30 years. £8 billion of infrastructure will be invested into the region. This is the largest deal of any Combined Authority. It is underpinned by a very strong private partnership.

Henrietta Brealey was asked to explain the advantage of the Combined Authority and Midlands Engine for businesses. She explained how businesses do not think in local authority terms, as business geography is often larger and more organic, so going forward the Combined Authority and Midlands Engine will be an asset to them. However, there is more to do on business engagement as businesses are often confused about the best way to get involved.

Sarah Middleton focussed on how to sell the Combined Authority outside Birmingham.  There will be a working partnership between public and private sector. There will also be a focus on understanding what is important to the public. She also discussed skills as a “big issue” for the Combined Authority and Midlands Engine, a policy area @CityREDI is already working hard to develop the research on. The region is facing a challenge to upskill across the board with an average wage shortfall of £4000 per annum in productivity. There is a need to move from a low-skilled to high-skilled economy.

The second panel featured Simon Collinson, Dean of Birmingham Business School; Bill McElroy, Managing Director Consulting, Turner and Townsend; Peter Ware, Browne Jacobson; Jo Lloyd, Commercial Director, Birmingham Airport; and Laura Shoaf, Strategic Director, West Midlands Integrated Transport Authority. Laura Shoaf stressed that there has been a change in the way that transport is perceived. It is now seen as an enabler of growth. It provides access to training, education, leisure services, and much more. To the Combined Authority geography does not matter and transport allows for crossing geographies. Indeed the LEPs of the Combined Authority have already been working in partnership for 2 years on transport. With this in mind the Combined authority needs to maximise the opportunities of HS2. Attention needs to be paid to how everyone is connected to this and how people will move through the conurbation during the construction period.

Jo Lloyd continued the theme of transport highlighting the £1.1 billion economic impact of Birmingham Airport. However, people are still leaving the region to travel long haul. The proximity of the region to London is a big challenge. The airport needs to be integrated into HS2, as making it easier to get to the airport will increase demand.

Simon Collinson stressed the importance of this connectivity and its significance in driving regeneration. At present the region is constrained because of transport. HS2 will change this but the region will then need to consider what its role is within the London Economy.

For Bill McElroy connectivity means that people now do not necessarily live where they work. Birmingham therefore needs to become an attractive location for businesses and the wider Combined Authority an attractive place for people to live.

Peter Ware highlighted that going forward, a seamless approach to delivery of solutions for the public and businesses is needed.  He also raised the issue of Brexit. If there is a Brexit George Osborne’s credibility will be called into question. Osborne and the treasury have been leading the devolution deal and therefore Brexit could have implications for its future.