“Though she be but little, she is fierce!”
-William Shakespeare

On 20th March 2018 Edward Cadbury Centre welcomed Rev Dr Barbara Reynolds for an uplifting and inspiring open lecture at University of Birmingham. Dr Reynolds was speaking about the courage and resilience of Coretta Scott King, not just as the wife of Martin Luther King, Jr but as a forefront activist. It was highlighted that she was not just an accessory to her husband’s campaign, but she was active in racial justice politics, took part in boycotts and even against all the death threats, she never backed down. As Barbara quoted her; “I’m married to Martin but also to the Movement”. Coretta also played a key role after her husband’s death to ensure that the King’s agenda became institutionalised and people would not forget him. However, Coretta’s activism and work did not just sustain her husband’s legacy, but she had expanded it. She was an active human rights activist and made sure that “women rights were human rights”.

Against all the darkness and critiques in her life, Coretta always saw a rainbow in each of her days and preached that “hate infects the hater and the one hated” along with that “love triumphs over evil”.

In a time when women are still considered to be less fit for positions and their work and achievements are marginalised, we need to keep Coretta’s legacy alive and remember that without her and all those strong women, the Movement would had been left without its backbone and might not became a mass movement.

As a young woman, listening to Barbara Reynolds was a highly uplifting experience, reminding us that we should persist and do not let only men write our history because “change come from the bottom up when people have enough” and we should “not be silent but raise our voice and be the change we want to see”.

In a period when it feels like we are running down everything good and all the achievements we had made in regards to human rights and compassion, voices like Barbara’s and Coretta’s can help us to see that there is hope in the darkest days, too. 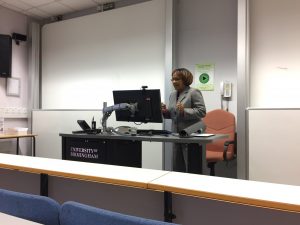