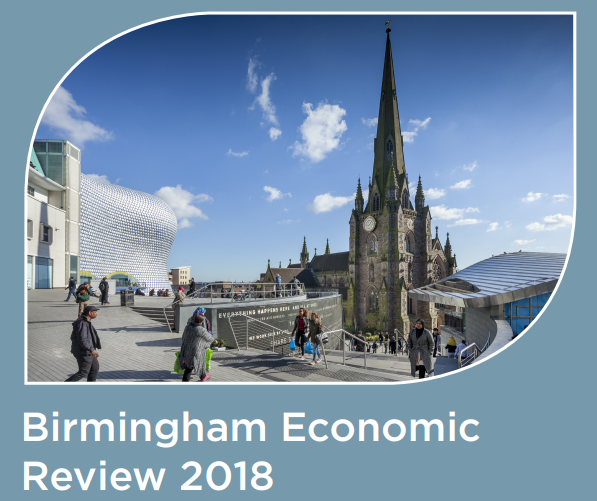 Businesspeople, policymakers and academics from Birmingham and the rest of the West Midlands gathered last Friday for the launch of the Birmingham Economic Review 2018. Delegates were posting their thoughts about the report – as well as the new Edgbaston Park Hotel which hosted the event – using the hashtag #BER18 on Twitter. The report was produced by the team at City-REDI along with the Greater Birmingham Chambers of Commerce and is full of data to inform research, policy and investment decisions in the area.

Speaking on the panel, we had:

The panel focussed a lot on skills and productivity, which are key challenges for the region and for the coming local industrial strategy for the West Midlands Combined Authority (WMCA) area. Professor Collinson said that ‘the biggest challenge for the region isn’t Brexit or skills, it’s maintaining the momentum’, pointing to the fact that the West Midlands is the top region for Foreign Direct Investment after London with strong growth in business and professional services. He also commented that Birmingham’s graduate retention rate has improved and that there are more high-skilled jobs in the area. However, the unemployment rate continues to be above average and the number of people with no formal qualifications is still high.

The panel discussed other strengths that Birmingham has, such as its location at the heart of major transport networks, the strong university presence, and the fact that it is the youngest major city in Europe. Tim Pile commented that the region’s economy is bigger than 6 Eurozone countries, saying that ‘we can’t forget the geographical scale of what we’re dealing with. If you think of this place as a business, we’re doing incredibly well.’ The report also stated that the business, professional and financial services (BPFS) sector is twice the size of manufacturing and engineering in the region, accounts for 28.2% of GVA and 1 in 5 jobs. Employment in the sector is set to grow by 31%, with its contribution to GVA set to double by 2030. Tim Pile added that ‘successful economies drive successful societies’.

Some weaknesses of the area also came up. Beyond the qualifications gap, GVA per head underperforms the national average. Birmingham firms named cost pressures as their number one barrier to innovation, followed by a lack of skills and a lack of finance to innovate. Furthermore, there is a below average employment rate: the region still lags behind national rates for unemployment, with Birmingham’s employment estimated at 63.6 per cent in 2017 compared to the national rate of 74.9 per cent. City-REDI’s research demonstrates that when this is broken down by ethnic group, there is significant variation in employment rate across the city’s communities. More work needs to be done to understand these figures. Dawn Baxendale from Birmingham City Council noted on rates of homelessness in the city as a problem that the public sector cannot solve alone, calling for greater collaboration between private enterprise and public services. 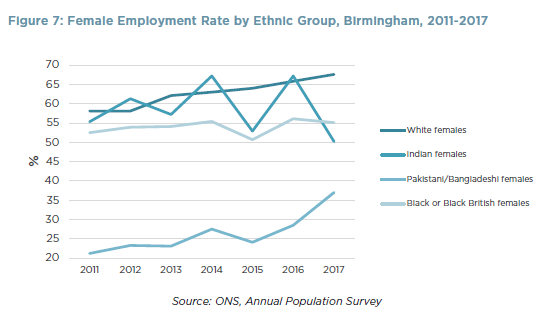 There are many opportunities coming for Birmingham in the near future. Significant infrastructure investment in the form of HS2 and the Midlands Metro will enable people to move into and around the region more easily. Transport for West Midlands has launched a scheme to introduce smart ticketing on public transport, and cycle lanes are being built. Birmingham also benefits from a youthful and ethnically diverse population that can enable large firms expanding their presence here to connect more with their customers and scout out innovative ideas. The increased retention rate of students studying in Birmingham also suggests positive developments on the qualification rate of people living in the city are to come.

Finally, the panel considered challenges for the region’s economy. The uncertainty of Brexit was noted here, as was the prevalence of low-value, low-wage, low-skill jobs. As came up in our panel events at the Conservative and Labour Party Conferences, the lack of affordable housing continues to be a major issue for the country as a whole as much as for the West Midlands region. A specific local challenge is congestion, impacting on the ease of moving people and goods in, around and out of the city.

The panel event closed with Saqib Bhatti asking for three words apiece to describe Birmingham. Louise Stigant, MD of Mondelēz, said Cadbury (one of the firm’s big acquisitions), possibilities and pride. Dawn Baxendale said exciting, pride and grasp. Tim Pile said energy, exciting and entrepreneurial. The event ended on a positive note: with HS2 and the Midlands Metro on the way, along with the 2021 Coventry City of Culture and 2022 Birmingham Commonwealth Games, there is a real sense that the region can change perceptions of the place for the better of everyone living here.

Download and view Professor Simon Collinson’s slides from the event.

Download and view the overview and impact slides from the event.