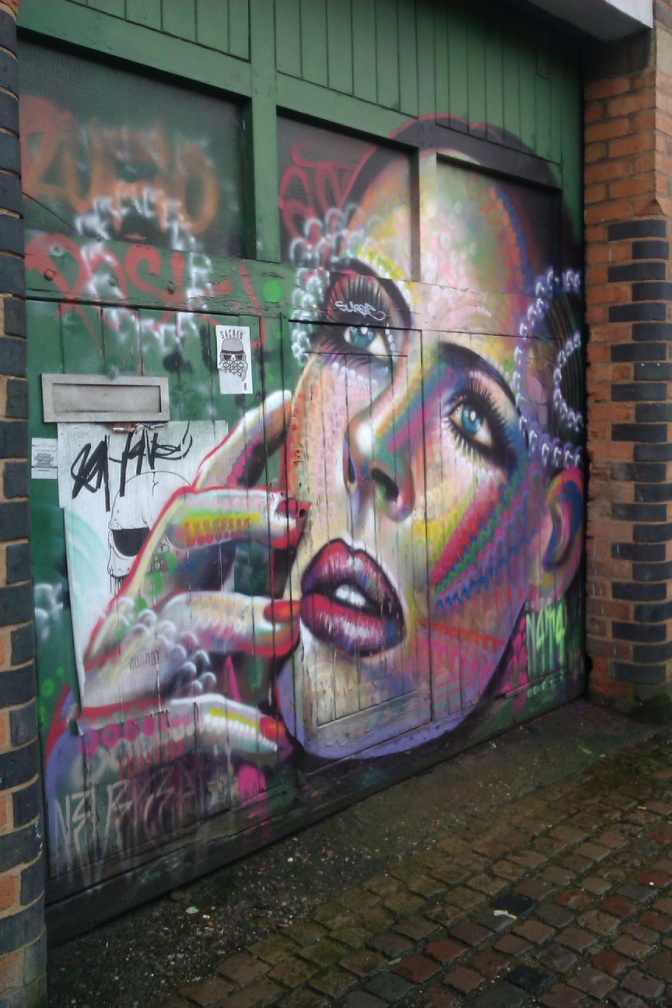 Cities should be interesting places to live and work. They should be places for serendipitous encounters with people, buildings and streetscapes – including green infrastructure. The best street environments are spaces for display, entertainment and encounter. Many cities are ugly and yet lovely places and many are too often lonely places; places for the socially isolated and the disadvantaged. There are a number of important questions to ask about cities: What makes for an attractive living and working environment? What type of environment stimulates creativity, innovation, education and ambition? Are some types of environment more productive than others? Do some types of environment constrain creativity and innovation? What is a healthy environment – for physical, as well as mental, health?

There is a real danger for the policy-maker, the planner and the academic that the complexity of the city is converted into a set of numbers – indicators that measure everything and often nothing – and indicators that tell us nothing about the quality (or lack of quality) of urban living. A key challenge is how to assess or measure the qualities of a city? This is a task beyond the capability of the economist. It requires creative vision – whatever that might be… How does one model the qualities and impact of a smile in response to some micro-quality of a streetscape? Some would argue that this is a trivial exercise, but city living is about trivial experiences, encounters, glimpses, sounds and scents and it is these that differentiate the best cities from the mediocre. The difficulty is that the quality of a city rapidly becomes reduced to something that appears to be more like a balance sheet. We need to begin a conversation about what makes a city a fun and entertaining experience – an experience that both enhances and expands liveability and livelihoods.

Birmingham City Centre has been transformed for Christmas with the arrival, on November 16th, of the German Market. For just over a month, central Birmingham is partly transmogrified into a version of Frankfurt’s Christmas Market with different scents, sounds, streetscapes and entertainment. The streets become a place to eat, drink, shop and have chance encounters. We could measure the economic impacts of this market – both direct and indirect – but this would ignore all the other impossible-to-measure impacts. How does one measure the impacts of a scent, a chance encounter and the psychological experience of a vibrant streetscape? This is a little like the movie The Sound of Music: how does one measure the impacts of “Snowflakes that stay on my nose and eyelashes, Silver-white winters that melt into spring…”? There are some things that should not be measured and often these are the things that provide a street or a city with a presence that is both enjoyable and memorable.

We need to consider the qualities of Birmingham’s streetscapes. There are over 500 works of sculpture in Birmingham and this is one of the highest concentrations in the country. These art works date from 1709 and cover a great variety of subject matters and styles. The best will produce a smile from those who take the trouble to look. This raises the question: what are the city’s most important works of art? But there is a more important issue here. A work of art is experienced in the eyes and mind of the beholder. Public sculpture is only meaningful if it communicates something to the viewer. Different people see and experience different things. It would be interesting to develop a discussion regarding the qualities of Birmingham’s streetscapes with a focus on sculpture in the public domain. What works and what is effective and for whom? As importantly, what type of streetscapes contribute to enhancing the quality of urban living, liveability and that most over-used and dreaded word – productivity?

It is worth noting that public art plays a very special role in the life of a city.  New roads and developments are ‘opened’ but it is only public art that is veiled and then unveiled. This veiling wraps a work of art in a mystery that is then revealed. Many of the city’s art works link the city with the past and also with the histories of other places. These works of art are to be found across the city. Over the entrance to the Blue Coat School, Somerset Road, are replicas from 1930 of Edward Grubb’s Blue Coat Children (the original art works are kept in the school). This educational work of art is a representation of a boy and girl and inscribed under the boy are the words “Train up a child in the way he should go and when he is old he will not depart from it”. This is a boy of his time wearing a frockcoat.

Outside the Barber Institute of Fine Arts, University of Birmingham, a piece of Dublin can be found. This is the memorial statue of George I, commissioned by the Dublin Parliament in 1717. This was unveiled in Dublin in 1722 and transferred to Birmingham in 1937. This statue is an exercise in geographic relocation and geopolitics. It is also the oldest memorial statue in Birmingham.

In Banbury Street, there is the Group of Trophies on the Gun Barrel Proof House. This sculpture was created in 1813 to highlight the role Birmingham played in manufacturing weapons – and especially guns. This industry was an important aspect of this city’s history and this sculpture is one memory of this history inscribed in Birmingham’s streetscape. This was the only official Proof House outside London and the trophies include a Roman helmet, armour plate, the Hanoverian Coat of Arms, the Birmingham shield and the cross swords (the proof mark for Birmingham gun-makers). Also included are examples of locally manufactured flintlock muskets, pistols, gun-barrels and cannon balls. These trophies can be read as a celebration of local industry, innovation and employment, but also as a reminder of the role this city has played in creating and manufacturing the tools to support war and defence.

I have many favourite public sculptures in Birmingham and many have become old friends, sometimes taken for granted, but more often than not they are one of the highlights of a stroll around the city. Perhaps my favourite is, arguably, one of the most interesting buildings in Birmingham city centre (but, then, Birmingham has many interesting buildings). For me, I will often go and glance at the former Eagle Insurance building, 124 Colmore Row. This building was designed in 1900 by William R. Lethaby (1857-1931) in collaboration with the local architect Joseph Ball (1852-1933). It is one of Birmingham’s comparatively few Grade I listed buildings and it is unusual as it was built as an office building (how many Grade I listed office buildings are there in the UK?). What is special about this building is the complete composition of the whole building as a work of art. The façade includes a chequerboard pattern of plain blank circles and panels of brickwork and an Eagle. The Eagle has spreading wings and this was the emblem of the original owner of this building – the Eagle Insurance Company. 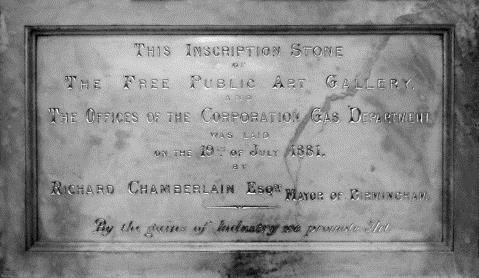 Another of my favourite pieces of public art in Birmingham is, I suspect, overlooked by the majority of Birmingham’s residents and visitors and, for many, is not defined as ‘art’. This image shows the inscription stone for the City’s Art Gallery that was built in 1885 as part of the second phase of the Council House. It was unveiled by the younger brother of Joseph Chamberlain, Richard, who was Mayor of Birmingham from 1879 to 1880. This inscription stone states “by the gains of Industry we promote Art” or, in other words, the gallery was paid for by profits from the sale of gas. This inscription links the gallery with a decision made by Joseph Chamberlain, the then Mayor (1873-76), for the city to acquire the town’s privately owned gas companies providing the city with a revenue stream (Bryson et al., 2017). It was this revenue stream that enabled the City Council to finance the transformation of Birmingham including the development of the Council House and Corporation Street.

Art has made an important contribution to Birmingham’s history, to the quality of urban living and of the city’s streetscapes. It is important that the role that art, music and dance have played in Birmingham’s on-going development is appreciated and acknowledged (Bryson, 2007). Statistics or data analytics and various forms of economic modelling only provide one way of exploring cities. There are many other dimensions of urban liveability, lifestyles and livelihoods that cannot be measured and modelled. It is these aspects of urban living that transform city living into an experience that occasionally leads to a smile and that plays an important role in enhancing the quality of urban life. The final questions to consider are: how do we measure the value of a smile; how do we model the impacts of a smile; and, what are the dimensions of an entertaining, stimulating, safe and productive streetscape and city?

Bryson, J.R. (2007) ‘Arts, Dance, Cultural Infrastructure and City Regeneration: Knowledge, Audience Development, Networks and Conventions and the Relocation of a Royal Ballet Company from London to Birmingham’, The Norwegian Journal of Geography, 61:3:98-110

This blog was first posted on the Urban Living Birmingham website by Professor John Bryson.