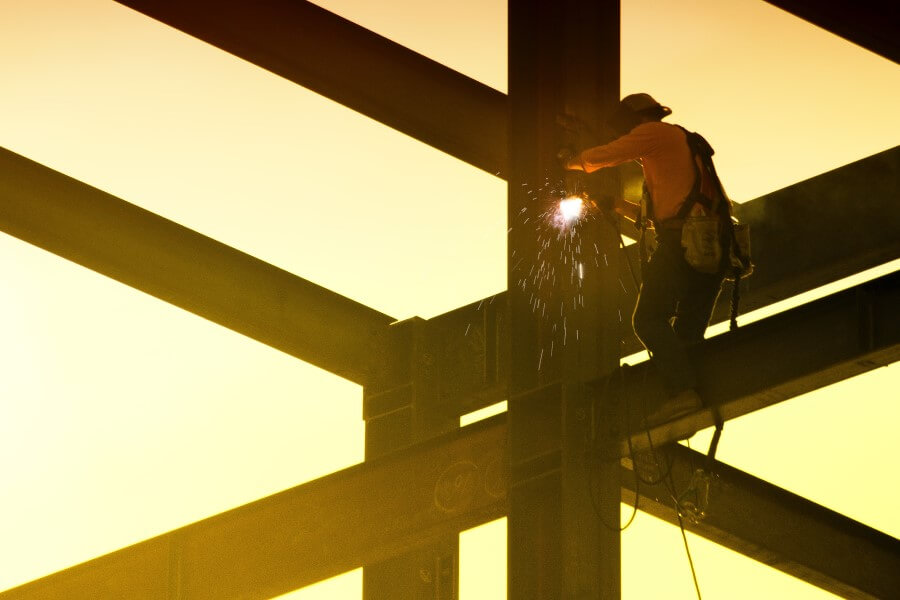 Professor Anne Green discusses a recent research study report led by IFF Research with City-REDI and Warwick IER looking at the impact of the new Points-Based Immigration System on the construction industry in the UK.

In February 2021 the Construction Industry Training Board published the latest results from a series of annual studies on Migrant Workers in the UK Construction and Built Environment Sectors. The research study, led by IFF Research, involved a review of recent literature on migration and policy documents, analysis of the 2019 Labour Force Survey, in-depth interviews with a dozen employers – each with a significant number of non-UK employees, four specialist construction recruitment agencies, three other industry stakeholders, and a telephone survey (conducted by IFF Research between September and November 2020) with 350 employers and agencies.

Awareness and impact of the new Points-Based Immigration System

A previous article in the Monitor has outlined changes to the UK immigration system after the Brexit transition period. The employer survey undertaken from September to November 2020 revealed that 72% of employers thought that the end of free movement and introduction of the Points-Based Immigration System (PBIS) would impact the construction sector’s ability to secure a skilled workforce. Over a quarter of employers and half of recruitment agencies thought the impact would be serious.

Nevertheless, most employers indicated that the introduction of the PBIS would not immediately impact their operations because of the impact of COVID-19 on demand for labour and continued access to EU migrant workers who have chosen to stay in the UK post-Brexit. Looking ahead, however, major investment in infrastructure and the role that construction in meeting the net-zero carbon target is likely to drive demand for construction skills beyond the immediate future. This provides an opportunity to enhance employers’ awareness of the PBIS.

The reliance of the UK construction sector on migrant workers

Analyses of Labour Force Survey data indicate that 10.2% of the UK’s construction workers were from outside the UK in 2019. This was slightly down on the 10.7% recorded in 2018. Almost half (49.6%) of all non-UK workers in 2019 lived in London. Most of this overseas workforce comprises EU workers: 8.2% of all workers were from EU countries in 2019, down from 8.6% in 2018. Brexit may be a factor here, alongside the relative attractiveness of opportunities in migrant workers’ home countries.

Labour Force Survey data indicates that non-UK workers tend to be younger than UK workers. While just over a third of UK workers are under 35 years of age (nearly 34%), that proportion increases to 41% for non-UK workers (see diagram below showing the age structure of UK and non-UK workers). The ageing of the construction workforce is a key issue going forward. 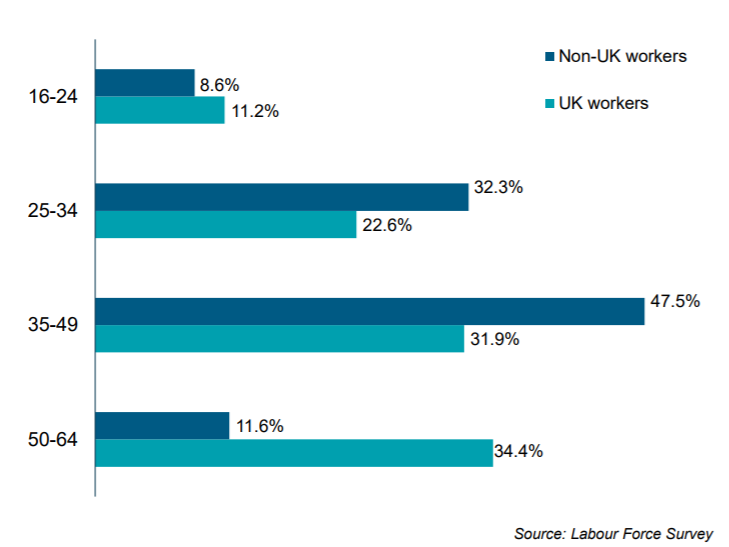 Workers born outside of the UK were much more likely to be self-employed, with just under half (nearly 49%) working for themselves compared to nearly 38% for UK-born workers. This is significant as in the UK post-Brexit immigration policy there is no route open for self-employed workers. A further loss of EU migrant workers currently in the UK would have implications for the construction workforce and for sub-contracting in the UK. London is likely to be particularly hard hit, but regions like the West Midlands would also suffer knock-on impacts.

A majority of employers in construction with non-UK workers in 2020 indicated they hired these workers because they have a better attitude and work ethic (59%). More mentioned this factor than in previous studies in 2019, 2018 and 2018. Slightly under half (45%) were motivated by there not being enough skilled UK people that apply; though there has been a small but consistent fall since 2017 in the proportion citing this as a reason (see diagram below). Nevertheless, the availability of UK labour with requisite skills remains a key issue. 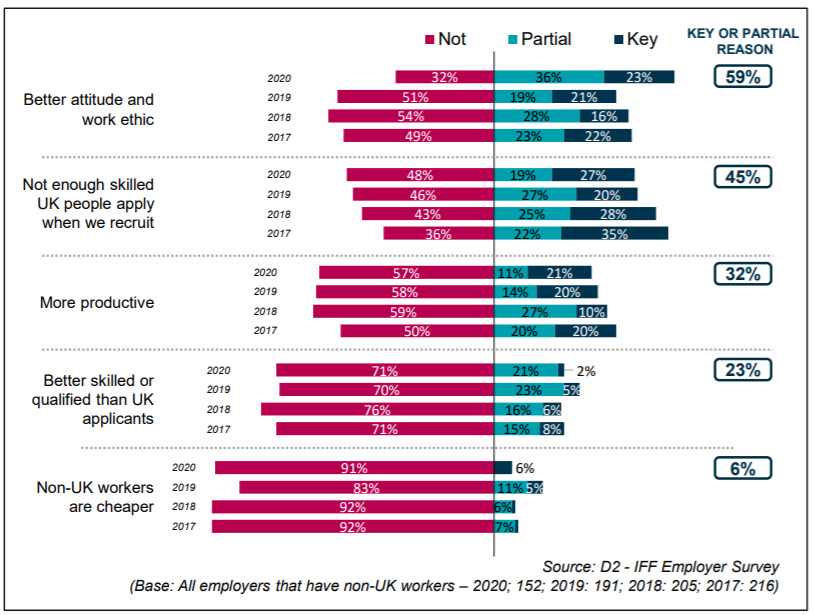 An increase in overall levels of unemployment and limited opportunities in sectors that have traditionally competed with construction for new entrants certainly represents a recruitment opportunity for construction. Evidence from the survey of employers indicates that 41% are planning to upskill their UK workforce and 30% are looking to create more PAYE jobs for domestic workers. However, less than a quarter (24%) consider that they will increase salaries so they meet the PBIS threshold for employing from overseas, and just 16% anticipate recruiting more apprentices. Employers are particularly concerned about their ability to source general labourers and groundworkers, with qualification levels for these roles below the requirement for the new Skilled Visa route. The diagram below shows the main occupations that agencies expect to be more difficult to recruit / will encounter skills shortages due to the PBIS. 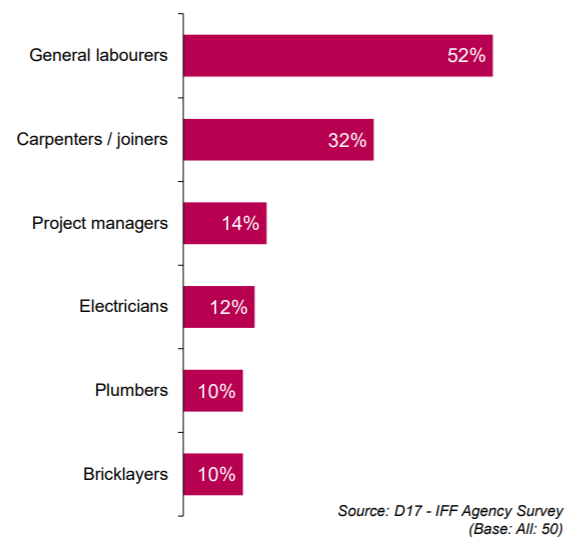 Evidence from recruitment agencies provides a more optimistic view, with 68% expecting that the amount of training offered by employers will increase and 56% predicting that more full-time jobs for domestic workers will be created. Agencies also expect that there will be a reduction in both skilled (68% expect a decrease) and low-skilled workers (80% expect a decrease) coming to the UK. Around half expect difficulties filling construction vacancies.