Dr Abigail Taylor summarises key findings from a recent report published by the Centre for Inequality and Levelling Up to which she contributed.

The Centre for Inequality and Levelling Up (CEILUP) at the University of West London has published a collection of contributions and perspectives from a range of contributors across policy, politics, and academia examining what levelling up is and whether it can work. I was delighted to contribute some thoughts on how the UK can learn from international experience to level up.

In this blog, I first summarise the focus of the different sections of the report. I then draw out some of the key messages in the chapter that I contributed. I end by discussing the seven principles of levelling up and the Levelling Up ‘Policy Wheel’ presented at the end of the report which builds on arguments across the essays in the collection.

What do we learn from the different contributions in the report?

Section 1 of the report defines levelling up.

Contributions aim to: discuss the meaning of levelling up; examine levelling up, equality and opportunities (suggesting that to achieve a more meritocratic society greater attention needs to be paid to addressing cultural and social barriers to taking up opportunities); and analyse longer-term systemic issues which strongly influence the levelling up debate in the UK context. The chapters emphasise the opportunities offered by Levelling Up to improve social mobility and inequality of opportunity across the UK. However, given the extent of structural inequalities and concentrated economic growth and power in the UK, they call for a collective cross-party, people-centred approach to levelling up based around long-term strategies, empowering local communities and achieving balance between market economics and redistributive interventions. Essential to achieving this is clearer objectives about what levelling up policies really seek to achieve.

Section 2 focuses on levelling up and place. The chapters include several interesting charts demonstrating that:

Another contribution in section 2 argues London should not fear levelling up as it is likely to benefit from increased productivity among cities and regions beyond London as this “could well” reduce some of the growing pressures on the capital and/or facilitate increased investment in London. An insightful piece on levelling up and social mobility analyses how the University of Derby has developed wide-ranging partnerships to support this agenda and incorporated social mobility into its Strategic Framework.  It stresses the “clear role of higher education in place-based interventions that link widening access, research and innovation to benefit social mobility and the levelling up agenda to improve livelihoods and opportunities”. The section ends with a contribution by the Leader of Stoke-on-Trent City Council which had a vision for transforming the city before the government launched levelling up, and has since secured funding for three projects through the Levelling Up Fund. It exemplifies some of the challenges faced by local leaders in delivering large-scale projects as a result of budgetary pressures following spending cuts and the short-term nature of the current competitive funding model.

Section 3 examines how we can make levelling up happen:

The first two contributions provide insight into how education systems could be developed to support levelling up. They stress the role of developing lifelong learning and skills strategies including support for specific groups (e.g. age, background, disability, or professions) to address inequality and the role of small and modern universities in regional levelling up through supporting local growth and productivity. Another contribution argues that policy should focus on the hyper-local neighbourhood level, prioritising support for the most deprived and ‘left behind communities’ through investment in community leadership capabilities and social infrastructure. The importance of improving the delivery of public services across the UK in reducing inequalities is developed further in the next contribution which identifies “a direct link between efficient public services, such as healthcare and education, and economic growth”. Other contributions explore two other aspects of the levelling up agenda: inequalities within the world of work and the importance of considering net-zero and levelling up as mutually reinforcing.

Thoughts I shared in the report

The chapter I contributed summarises findings from research published by the Industrial Strategy Council in early 2021 examining international examples of effective place-based interventions that have led to “levelling up”. In the research, we looked at how Estonia, San Antonio, Greater Lille, and the Ruhr region have approached economic and social renewal. The report identified six ‘foundations’ – or cross-cutting themes – for levelling up which were important in supporting local economic growth in the case study places:

I used the findings of the Industrial Strategy Council report to provide insights into current debates regarding the direction of levelling up policy in the UK. Key points I make in the chapter include that:

The report concludes by setting out an agenda for levelling up. Written by Professor Graeme Atherton, Head of CEILUP, this chapter draws on all the contributions in the report to identify seven cross-cutting principles for government to support levelling up:

These principles are accompanied by a ‘policy wheel’ designed to be a starting point for the development of systems-based thinking approach to levelling up: 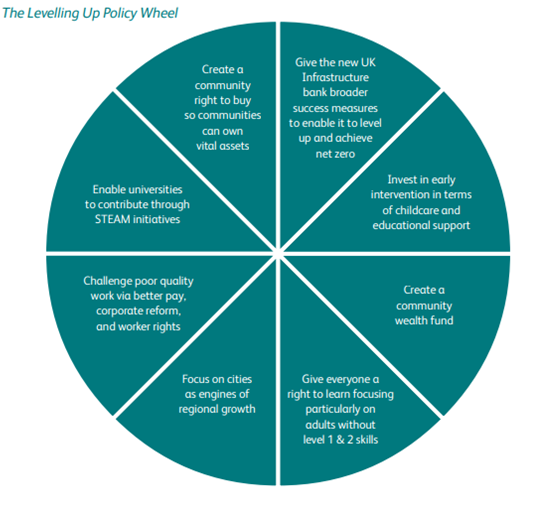 To find out more about the perspectives and arguments developed in the report, download the full report here.

This blog was written by Dr Abigail Taylor, City-REDI / WMREDI, University of Birmingham.