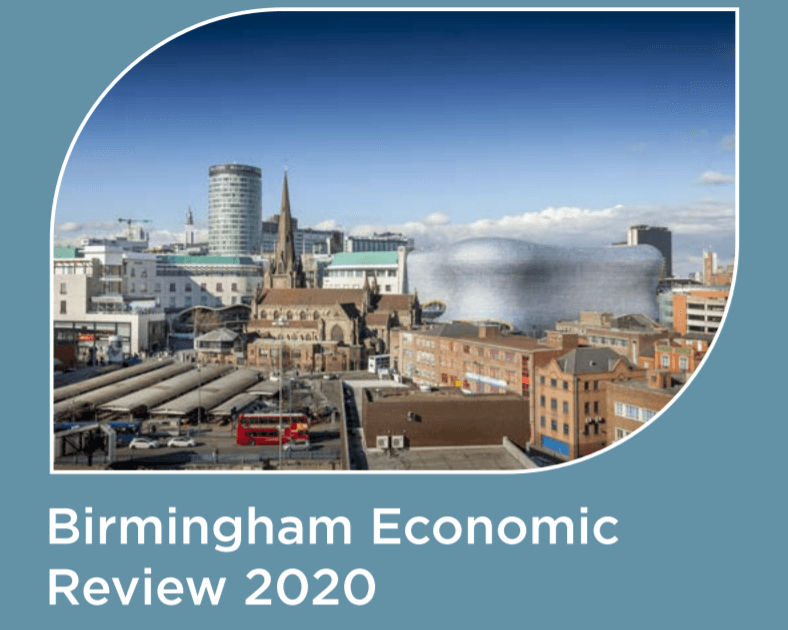 Dr Abigail Taylor discusses the impact of COVID-19 on jobs and skills in Birmingham, an area with large automotive and education sectors and a younger than average population.

The Birmingham Economic Review 2020 is produced by City-REDI / WM REDI, University of Birmingham and the Greater Birmingham Chambers of Commerce, with contributions from the West Midlands Growth Company. It is an in-depth exploration of the economy of England’s second city and is a high-quality resource for organisations seeking to understand Birmingham to inform research, policy or investment decisions.

Covid-19 continues to have a significant impact across Greater Birmingham and Solihull. Approximately a fifth of businesses in WMCA were directly affected by the COVID-19 lockdown. According to calculations by Oxford Economics, Birmingham will be the worst-hit city in the EU due to its dependency on the automotive and education (notably Higher Education Institutions) sectors and a younger than average population. The research indicates unemployment may rise to nearly 10% in Birmingham in 2020.

Already, the number of people in work has fallen and the number of people claiming benefits for the reason of the being unemployed has increased. The number of claimants aged 16 years and over increased by 2.9% between June 2020 and July 2020. Whilst this is below the UK average of 3.5%, it represents a significant increase (+78.8%) compared to March 2020. The increase in young claimants has been particularly striking (+88.8% for the WMCA) compared to March 2020. High numbers of claims are also concentrated in certain neighbourhoods of Birmingham. The top 9 wards in the West Midlands Combined Authority that had the highest number of claimants as a percentage of residents aged 16+ in July 2020 are based in Birmingham, with the top three being Birchfield at 17.5%, followed by Lozells at 17.4% and Handsworth at 16.8%.

There has been high take-up of the government’s Coronavirus Job Retention scheme. The West Midlands has the joint-highest take up rate in England at 32%. At 35%, the take up rate for claims to 31st July in Birmingham and Solihull is higher than the regional average.

The impact of the crisis has been uneven across sectors with employment, production and output in certain sectors being acutely affected. The manufacturing and hospitality sectors have been particularly affected.

The furlough scheme has undoubtedly been an important factor in preserving jobs within Birmingham to date. 147,800 workers were furloughed in Birmingham at the end of June, rising to 156,200 at the end of July. Across the West Midlands, the sectors with the highest number of furloughed workers was Business, Professional & Financial Services; Retail and Cultural Economy including Sports. Between April to June 2020 the unemployment rate for the West Midlands Region was 4.4%. This represents a decrease of 0.6 percentage points from the previous quarter, which is the highest decrease of any region. However, with firms continuing to face significant increases in costs, reduced demand and decreased cash reserves, it is likely that unemployment will accelerate as the end of the intervention at the end of October draws near.

There is a danger that recent progress in increasing skills and employment levels within Birmingham may be slowed or reversed without the introduction of further effective countervailing measures at both a national and local level. Birmingham’s population is younger than the national average, and young people, particularly those with low skills levels, are being hard-hit across the country by the crisis. Policy needs to be developed and appropriately funded to ensure young people are effectively supported into training and employment. It is crucial that efforts focus on how young people can be best supported to gain work experience in the context of social distancing.

Effective partnerships across the public, private and voluntary sectors (for example, youth employment partnerships) will be crucial to expanding opportunities in the long-run.