On Tuesday 2nd May City REDI’s Catherine Harris presented her research on EU entrepreneurs in Birmingham in response to Brexit at the event Understanding Brexit and migration: implications for Birmingham. 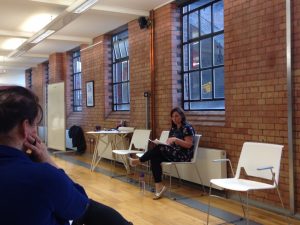 The first presentation, entitled Post-Brexit fears among secondary migrant Somali Muslims in Birmingham, came from Ozlem Young and Chris Allen, University of Birmingham. Their paper presented the preliminary findings from a project exploring fears among secondary migrant Muslims of Somali heritage in the city of Birmingham following the 2016 Brexit vote.   Since 2000, a considerable number of Somalis have arrived in Britain having previously obtained full citizenship status in another EU member state.  In a relatively short period of time, they have become firmly established, thereby regarding both Birmingham and Britain as ‘home’. Since the Brexit vote however, this has been thrown into disarray and many fear for the immediate future, not least whether they will be allowed to remain in the country let alone call it home.

The second paper, Go Home? The politics of immigration controversy, was presented by Hannah Jones, University of Warwick and Kirsten Forkert, Birmingham City University. They discussed how government anti-immigration communications designed to show toughness have affected policy, public debate, pro-migrant and anti-racist activism everyday life for people in Birmingham and around the UK. The talk drew on research from the recently published book ‘Go Home? The politics of immigration controversy’.

The next presenter was Lisa Palmer, Birmingham City University. She explained than in Birmingham, the Brexit vote was evenly split with 49.6% of voters choosing to remain and 50.4% voting to leave. With frequent invocations by government ministers that ‘the people’ have spoken and that the process to leave the EU should not ‘frustrate the will of the people’, her presentation asked, who exactly are the people? Lisa explained that populist rhetoric deliberately splits ‘the people’, particularly through discourses on whiteness, social class and social capital and how they relate to voting patterns. However, these correlations breakdown when the factor of Black, Asian and migrant ethnicities are examined as we have seen in Birmingham wards such as Aston, Bordesley Green, Lozells and East Handsworth, Sparkbrook and Washwood Heath. This has implications for Birmingham’s British born, settled and newly arrived migrant communities who now seem condemned to what Frantz Fanon has called the ‘zone of non-being.’

The final presentation of the evening was from City REDI’s Catherine Harris, with her paper on responses to Brexit of EU entrepreneurs. She explained that, in the wake of Brexit, EU migrants face not only an uncertain future as UK residents and employees, but also as employers. EU employers may find the business and social climate becoming increasingly unfavourable at a time when economies in the former EU Accession countries are on the ascent. Focussing on families which run businesses and originate from Poland and the Baltic States, the presentation explored the lived experiences of life and work in Birmingham for the individuals and their children. It also considered future aspirations and investment decisions, and how these have been affected by the Brexit process.

The evening concluded with questions, comments and debate focusing on the economic impact of Brexit, the impact of the media on attitudes towards migrant groups and what is unique in the case of the city of Birmingham.