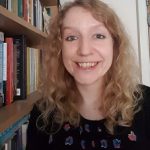 Emma Curry (@EmmaLCurry on Twitter) completed her PhD thesis, titled “Language and the Fragmented Body in the Novels of Charles Dickens”, in 2016 at Birkbeck, University of London. Her research interests include Dickens, nineteenth-century fiction, digital humanities, the body in literature, and the history of emotions. During her time at Birkbeck she spearheaded the ‘Our Mutual Friend Tweets‘ project, which ran from 2014 to 2015 in conjunction with Birkbeck’s online serial reading of Our Mutual Friend, and she is currently involved in the ‘Great Expectations Readalong‘ project, hosted by the University of Buckingham. She is now in the early stages of a new project on the emotional history of embarrassment, and organised a symposium on this topic, entitled “Embarrassing Bodies: Feeling Self-Conscious in the Nineteenth Century”, which was held at Birkbeck in June 2016. In this post she demonstrates how different materials across the ‘Dickensian Cyberspace’ can be cross-referenced to inform research – with a case study of Dickensian wooden legs.

In this blog post I’d like to explore some of the ways in which CLiC and other digital text repositories can transform our research on fiction, by reconfiguring and re-energising the ways in which we read and approach analysis. My current research is on body parts, and I’ve been working on analysing this aspect of Dickens’s literary style across the course of his career by tracing whether there are any patterns in the ways in which he uses certain body parts in his writing. I’m also interested in tracking this element across genres, in order to explore whether this body-part-infused style is something that fundamentally characterises the way in which Dickens approaches the world in language.

Digital tools working as a mediating space for Dickens’s writing

This is where tools like CLiC prove enormously beneficial: in recent years there has been a drive to digitise Dickens’s novels, letters, and journalism in online text repositories, and when used together, these tools provide a fascinating sense of the ways in which the internet can function as a kind of mediating space for drawing together and sorting through huge quantities of Dickens’s writing. They can also provide a rich range of new avenues for reading and making connections between patterns of language across genres.

Whilst full-corpus searching is a function available for many authors’ work, Dickens is a writer who particularly rewards this kind of reading: as the CLiC team have demonstrated so richly on this blog, the sophistication of the searching function is particularly effective in uncovering Dickens’s techniques of constructing his characters, especially through his use of repeated phrases of body language. Furthermore, whilst Dickens’s letters and journalism remain understudied in perspectives on his literary style, using these digital tools to read Dickens can also demonstrate how certain ideas and images are returned to and revised across multiple genres of his writing.

In this post I’m going to take one body-part-based example as a starting point. Dickens’s fondness in his novels for characters with wooden legs has long been noted by critics, but when these terms are tracked across CLiC and other digital tools it becomes clear that such a construct infiltrates almost every genre of his writing, with patterns of language shared across a range of texts.

From an initial survey of the frequency of this phrase across Dickens’s fiction, we can see the significance of this body part in the construction of characters, and how closely it is associated with the individuals in question. 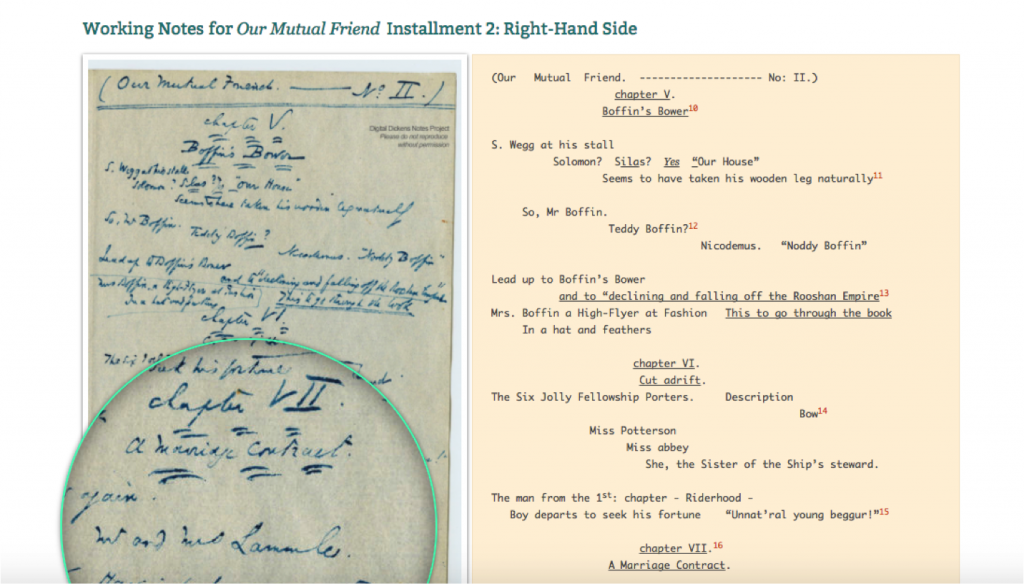 And indeed, in Dickens’s working notes for the second part of Our Mutual Friend (1864–65), we see how Silas Wegg himself springs from the single phrase ‘seems to have taken his wooden leg naturally’. Whilst Wegg’s name undergoes shifts – Dickens writes in his notes ‘Solomon? Silas? Yes’ – the wooden leg does not, indicating its centrality to the narratorial construction of Wegg’s character, and the importance of its repetition in signalling to readers a sense of Wegg’s form and personality whenever he appears in the narrative. Such a stylistic impulse is one Dickens is seemingly both aware of and deeply committed to: just below this note he refers to Mrs Boffin being ‘a High-Flyer at Fashion’, ‘in a hat and feathers’, and adds, with a double underline for emphasis, ‘this to go through the book’.

The ways Wegg’s leg is used within the narrative of Our Mutual Friend also build upon earlier descriptions outside of Dickens’s novels. In a piece titled ‘New Year’s Day’ in Household Words in 1859, Dickens describes an odd childhood memory he has of him and his sister ‘secreting’ a man with a wooden leg in their coal cellar. Such a task is made more difficult when, as Dickens narrates, the man’s wooden leg ‘bored itself in among the small coals, and his hat flew off, and he fell backward and lay prone: a spectacle of helplessness’.

Such a description here seems to function as a kind of imaginative trial run for the moment in Our Mutual Friend a number of years later when Wegg’s ‘self-willed’ leg becomes stuck in the ashes of the Harmon dust heap, and Mr Venus is forced to ‘haul […] him from his tether by the collar: […] his head enveloped in the skirts of his coat, and his wooden leg coming last, like a drag’. Later in the same scene Venus throws Wegg to the floor, ‘knowing that, once down, he would not be up again easily with his wooden leg’. In each case, Dickens’s fascination with the creative and linguistic possibilities of this particular body part is clear. But by reading using CLiC, and by then making links across other corpora, such repeated images also uncover a broader cohesiveness in Dickens’s semantic universe, one which is suggestive of the ways in which ideas and forms of imaginative language develop across his career. Such a method can also work to shift or reframe prevailing critical assumptions about the binary progression of Dickens’s writing style, from ‘light’ to ‘dark’ or ‘comic’ to ‘melancholic’.

Encountering Dickens’s words like his contemporaries in multiple contexts

Whilst these wooden leg examples are a very brief initial exploration of CLiC’s possibilities when used alongside other digitised corpora, one of the most exciting elements of these particular digital spaces and tools is the range of avenues for new work that they present. Bob Nicholson has written recently of the possibilities available to scholars if they ‘remix’ digital archives, drawing material together in new ways and making fresh connections across texts and disciplines. In the case of Dickens, these spaces also present the opportunity as a researcher to fully immerse oneself in his language in a manner that may be more familiar to a nineteenth-century reader, used to encountering Dickens’s words in multiple contexts simultaneously, be it a piece of his travel writing or a letter or the notorious ‘Personal’ address he makes in Household Words following his separation from Catherine. In that particular piece, Dickens reflects upon the fact that ‘there is a great multitude who know me through my writings, and who do not know me otherwise’. What is intriguing about the possibilities of the CLiC Dickens corpus and the other digitised corpora of Dickensian cyberspace is the opportunity they present to unsettle what we think we know about Dickens through his writing.