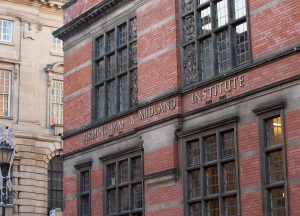 The AHRC-funded CLiC Dickens project has officially come to an end. We celebrated the successful conclusion of the project with our CLiC Dickens Day, at the Birmingham and Midland Institute (BMI), on 1 December. As Charles Dickens was one of the early presidents of the BMI, the venue was particularly suitable for our event.

The main research question for the CLiC Dickens project was:

How can corpus methods be combined with literary linguistic approaches to produce new insights into the creation of meanings (characterisation) in literary texts?

Throughout the project, we have approached this question from various perspectives including the following:

The CLiC Dickens Day consisted of two parts, an afternoon of talks and an evening programme with a reception and an Oliver Twist reading. The afternoon programme featured talks by the CLiC Dickens team and invited speakers, all related to the themes of the project including corpus stylistics, digital approaches to studying and teaching fiction, Dickens’s works and bringing linguistic research into the classroom.

The day started off with Michaela Mahlberg, the PI of the CLiC Dickens project, welcoming all speakers and attendees. In the course of the project a number of different people got involved and it was good to see members of the advisory board, early adopters and newcomers to CLiC all coming together on the CLiC Dickens Day.

Dan McIntyre, Professor of English Language and Linguistics at the University of Huddersfield, explained corpus linguistic approaches to discourse representation in his talk. As co-editor of Babel – The Language Magazine, Dan brought along free copies for attendees of the CLiC Dickens Day. Many thanks for that!

In our own talk about the CLiC Dickens project we summarised the outcomes of the project and showed the new CLiC interface. We also presented work from our ongoing research into overlaps between fictional speech and real spoken language. The talk highlighted some features of the CLiC Activity Book of which attendees received a free hard copy and which will be freely available from our resources website.

Anna Cermakova introduced the new 19th Century Children’s Literature Corpus, ChiLit, which is available for analysis in the CLiC web app. The ChiLit corpus was created as part of the GLARE project, which explores gender in children’s literature. The design criteria for the ChiLit corpus are explained in Anna’s recent CLiC guest post. In terms of the number of books, ChiLit is the largest corpus in CLiC! (Concerning the number of words, 4.4 million, its size is similar to that of the 19C – the 19th Century Reference Corpus).

Emma Curry presented a fascinating case study on using CLiC to explore the body in Dickens’s works. She focused on forefingers and wooden legs, which are apparently among Dickens’s favourites! Emma has plenty of experience with digital approaches to 19th century fiction and crowdsourcing. Her latest digital project is the Great Expectations Readalong which involves volunteers tweeting the story from the perspectives of individual characters.

The CLiC team is also part of this readalong – Viola is tweeting as Clara Barley: @GE_ClaraB! The central Twitter account @GEReadalong is probably the best place to follow the unfolding plot; whilst the readalong has started on 1 December –coincidentally on the CLiC Dickens Day–, it is not too late to start following  as the project runs until August 2018!

Juliet John is a renowned scholar in Victorian Studies and expert on Dickens’s works. In her panel contribution she shared her experiences from various strands of her work that have bridged gaps between different disciplines. One of her latest efforts is to prepare a project that will make Dickens memorabilia available to the public for the 150th anniversary of Dickens’s death in 2020.

Martin Wynne is a Digital Research Specialist at the Oxford Text Archive and the UK National Coordinator for CLARIN. In his panel contribution he traced the development of digital text editions and emphasised the importance of considering the sustainability of digital data and tools.

Panel – Fiction in the English classroom

In this educational panel a teacher who has used the CLiC  web app with her students and two academics who have worked with teachers presented their insights on bringing linguistic research into the English classroom.

Lorraine Adriano is a teacher at Bishop Walsh Catholic School, Sutton Coldfield, Birmingham. Lorraine shared her fascinating experience of using our CLiC web app with her students. She reported, for example, that by using CLiC her students developed much higher levels of enthusiasm for studying A Christmas Carol than they had originally shown. Accordingly, CLiC encouraged students to pursue their own research questions, ranging from investigating the choice of the book’s title to verifying claims about the book on the internet.

Joanna Gavins is a Professor of Language and Literature at the University of Sheffield. Her panel contribution focused on her work on introducing Text World Theory to secondary school teachers. Joanna and colleagues have created a website with resources for teachers who are interested in Text World Theory which accompanies their teacher workshops.

Marcello Giovanelli is a senior lecturer in English Literature at Aston University. Marcello co-directs the Integrating English project for which he and his colleagues run the blog The Definite Article and an annual teacher conference. Indeed, the CLiC team were part of this year’s #IntEng2017, where we first launched the new CLiC interface! In his panel contribution, Marcello also introduced a new book series that bridges the gap between A-Level and undergraduate English language studies.

The evening programme started with a talk by Caroline Radcliffe, who is an expert in Victorian drama and has just launched her edition of Wilkie Collins’s three-act drama The Red Vial. Caroline gave us a fascinating account of Dickens’s connections with the theatre and his public readings.

Charles Dickens popped in for a visit this evening! @Research_EDACS pic.twitter.com/qalIRfDA0V

Caroline’s talk was a great introduction for the following reading by actor Simon Vaughan (@Simon_Vaughan). Vaughan’s reading of the Oliver Twist scene “Sikes and Nancy” was an impressive and thrilling experience. The evening programme made for a great closing to the CLiC Dickens Day and the official end of the funded project.

Many thanks to all speakers, attendees, and everybody at the BMI and the University of Birmingham who helped make this a successful and enjoyable end-of-project event!

Whilst the funded project has officially ended, the CLiC web app will continue to run and we will keep developing materials including future editions of the CLiC Activity Book. We are also available for teacher and student workshops in schools. To learn more about our work, please see our publications and resources site or get in touch via clic@contacts.bham.ac.uk