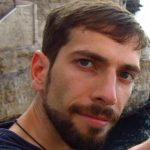 Lorenzo Mastropierro (@Lo_Mastropierro on Twitter) is a Teaching Associate in Literary Linguistics at the University of Nottingham. Lorenzo is the Assistant Editor for the International Journal of Corpus Linguistics. He has recently published his monograph Corpus Stylistics in Heart of Darkness and its Italian Translations. Now Heart of Darkness is also available in CLiC and Lorenzo presents a corpus stylistic analysis of light in this text using the CLiC tagging function.

Darkness is one of the most powerful symbols in Joseph Conrad’s 1899 novella, Heart of Darkness (HoD). It is so pervasive that it’s present even in the novel’s title. Its importance for the interpretation of the text has been widely recognised, and many literary critics have engaged with its omnipresent yet elusive imagery. Watts (1990: xx-xxi), for example, sees darkness as symbolising “moral corruption, night, death, ignorance, and that encompassing obscurity of the pre- rational and pre- verbal which words seek to illuminate”, while O’Prey (1983: 18) describes it as “the unknown, […] the subconscious; it is also a moral darkness, it is the evil which swallows up Kurtz and it is the spiritual emptiness he sees at the centre of existence”; finally, Goonetilleke (1999: 39) links the interpretation of darkness as “the unknown, the evil in humanity, the hidden self and the negation at the back of all things” to the more concrete meaning of “the centre of Africa”. Darkness in HoD has also been approached from a linguistic point of view. For instance, Turci (2007) has carried out a corpus analysis of dark* (dark, darkness, darker, and darkly) and identified the aspects of the text to which dark* refers, whereas Stubbs (2005) has looked at the overall semantic field of mist and darkness. I have also analysed darkness, in relation to the fictional representation of the African forest in my corpus stylistic study of HoD and its Italian translations (Mastropierro 2017).

But what about light? Is there light in the heart of darkness? According to Dowden (1957), there is light and it also plays a fundamental role in HoD, as it emphasises, by contrast, the deepening darkness. The themes of the novel are supported by the “central image of contrasts in light and darkness” (Dowden 1957: 35). Similarly, Brantlinger (1985: 372) considers “every […] light-dark contrast in the story […] precisely calculated for its effects both as a unit in a scheme of imagery and as a focal point in a complex web of contradictory political and moral values.” With this blog post, I wish to offer an overview of the use of the word light in HoD, showing at the same time how a quick concordance search can shed some light (pun intended!) on the textual behaviour of a lexical item.

Light occurs 27 times in HoD. Using the CLiC Tags function, I grouped the concordance lines into three different uses of the word (Figure 1): light used as an adjective with the meaning of “not heavy” (“adj”), light used in its concrete sense with the meaning of “source of illumination” (“con”), and light when used figuratively (“fig”), for example in expressions like in the light of later information, in a new light, and a professional light.

The occurrences of light within the first group (“adj”) can be immediately excluded from the analysis, as uses like light roof, light planks, light alpaca jacket, or light revolver-carabine are not really relevant to the study of the representation of light in HoD. However, if we look at the concrete uses (“con” in Figure 2), a more interesting tendency can be noted. Light is often found within a context in which some form of darkness is, directly or indirectly, present too. The light in the little cabin (line 5) is set against the black, flat wall of the woods. The light in Kurtz’s cabin (line 7) is surrounded by the beastly, beastly dark outside. And inside, even if the light was within a foot of his eyes, Kurtz says he is lying [there] in the dark waiting for death (line 6). More indirectly, light is described as dim in lines 2 and 3. Even when we see the benign immensity of unstained light (line 1) in the sky above the Thames, at the beginning of the book, we are reminded that the day was ending, as an ominous prophecy of the darkness to come. In fact, by the end of the novel, when Marlow meets Kurtz’s fiancé, the remaining light (line 10) struggles to resist the engulfing darkness: the darkness deepen[s], it grow[s] darker (line 9) and Marlow resigns to the fact that he could not have defended her […] not even defend [him]self from the triumphant darkness. Overall, not only light and dark are, literally, put side by side, but the latter seems to dominate over the former.

Looking at the figurative group (“fig” in Figure 3) doesn’t change this general impression much. Many of the uses in this category don’t seem too relevant, for instance in the light of later information (line 10), in the august light of abiding memories (line 1), or Light dawned upon me (line 6). Nevertheless, it is still possible to identify the juxtaposition of light and dark in some of the concordance lines. For example, Marlow describes his journey, and the light that it threw on everything about [him] (line 3), as sombre enough and not very clear (line 4). In line 9, Kurtz’s gift of expression is both a pulsating stream of light and a deceitful flow generating from the heart of an impenetrable darkness. The only metaphorical light that stays inextinguishable is that of belief and love (line 11), but all around it the room was growing darker.

In line with what Dowden (1957) and Brantlinger (1985) suggest, light in HoD functions as the contrasting element for darkness and, through this opposition, the prominent significance of the latter is emphasised. Light never seems to have the upper hand in the light-dark dichotomy, and this uneven relationship contributes to the overall sense of impending gloom that characterises Conrad’s masterpiece. Of course, this brief analysis is but the tip of the iceberg, as there are so many other aspects of the light imagery that could be taken into account in order to arrive at a more comprehensive picture. One of these could be its metaphorical significance and the extent to which the typical conceptual metaphors LIGHT IS KNOWLEDGE and LIGHT IS GOOD are employed in the text. Another related line of enquiry would be to explore the textual instantiations of the white/whiteness symbolism, which has already been recognised (e.g. Parry 1983) as taking centre stage in HoD. Yet, I hope this brief discussion has shown that, thanks to an online tool like CLiC, we can easily and quickly obtain an overview of the behaviour of a lexical item and use it as a helpful starting point for our stylistic investigations.

Please cite this blog post as follows: Mastropierro, L. (2018, February 20). Is there light in the heart of darkness? [Blog post]. Retrieved from https://blog.bham.ac.uk/clic-dickens/2018/02/20/is-there-light-in-the-heart-of-darkness