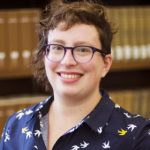 In this guest post, Heather Froehlich, Digital Scholarship Fellow in Text Analysis and Assistant Librarian at Pennsylvania State University, shows that digital humanities is not all about big data but can also provide useful insights on a smaller scale. She demonstrates this with a case study of Kate Chopin’s novella The Awakening.

One thing we digital methods people like to harp on about is the fact that quantitative methods are brilliant for dealing with huge amounts of text that are quite frankly incomprehensible at the level of literary-linguistic detail we would like to be able to study them at. The ability to observe frequency at a level of detail that would be impossible at scale is this is indeed their radical possibility. But the question of ‘scale’ is not a fixed measure. To the literary scholar used to focusing on one text at a time, ‘scale’ could mean that one text, whereas to someone who is used to dealing with corpora, ‘scale’ could represent the entirety of Eighteenth Century Books Online (ECCO). So when I was approached to write this post, I wanted to model what resources like CLiC offer to the scholar used to closely interacting with one text at a time.

I was intrigued to see that the CLiC project had included a copy of The Awakening and Selected Short Stories by Kate Chopin, in large part because The Awakening can be classified as a very long short story or a very short novella. It is very much the kind of writing which is perceived as wholly human-addressable, insofar that it is short enough to read in one sitting.[1] The Awakening is also widely understood as an early example of the development of an autonomous female identity (Toth 1976, 242; Gray 2004, 53; Chopin 57). Literary critics such as Perkins-Gilman (1898, 79); Skaggs (1974, 348) Seyersted (1969, 134) and Grey (2004) have focused on the performative aspects of women’s social enclosure within the confines of 19th century home life. And I am intrigued by its history as part of women writing their own literature and history about their own experiences in a society where this is widely frowned upon. In this post, I shall illustrate how simple frequencies can be used to guide a literary analysis

Direct references to the sea in The Awakening

The Awakening is perhaps best known for Edna’s suicide, at the very end of the story. Rather than continue her unsatisfying life, she drowns herself in the sea. This is a hugely evocative passage, with a deceptively beautiful final line, which is widely read as a metaphor for freedom from the land-locked emotional hegemony of a deeply patriarchal word. As readers, we know the concept of the sea is intrinsically important to this novella, so I was curious to see how the sea was discussed in Chopin’s text. I was surprised to see it is only mentioned explicitly 18 times in the novella.

Based on the relative location slider in the final right-hand column, we can see that sea appears more frequently at the start of the novella than anywhere else. Yet upon re-reading the novella, it was almost too obvious that so much of the action appears away from the beach.  Edna’s desire to break free from her husband and children occurs on land, but she can only be free from all the patriarchal hegemony when she returns to the natural earth, “an image of endless openness and possibility but also one of chaos and dissolution” (Grey 2004, 72). This fact about sea had turned out to not be a very monumental finding, in large part because the novella had answered the very question I had set out to answer much better than observing word frequencies and context could.

Remembering that computers are good at keeping track of lots of small details that readers are not necessarily attuned to, I then wondered how Chopin portrays the experiences of women in her novella, focusing on the pronoun she. There are a variety of characters who could be called she in this novella: Adele is introduced as one of Edna’s close friends, and the Pontelliers appear to have several coupled friends who appear throughout the story. Observing this pronoun offers a sense of how Chopin’s narrator presents the female experience, and if it is a universal experience for the women within the world of the story.

Corpus resources like CLiC let us observe patterns surrounding specific search terms in ways that are quite difficult to do as a linear reader – even with a highlighter. Using the concordance function, I searched for she in The Awakening. This offered 1,186 hits across the novella, covering 24 pages of results. If this feels like a lot, it is, but it is also offering a more specific kind of reading to the researcher: these are all the results with our term in question in them. (After all, 24 pages of reading results is really not much harder than reading an academic article with a sustained argument.) Since I was interested in what she was doing across the novella, I sorted my results by words to the right of the search term, giving a clearer sense of what repeated phrases and themes the corpus could show me.

Again, readers of The Awakening know it is written in the past tense, from some unseen narrator’s vantage point. While the use of past tense was easily observable, looking beyond those highly visible examples also suggests that the women in the novella are mentioned in conjunction with 3 conditional verbs (she could, she might, she would) enough to be visible as a recurring pattern. In aggregate, this represents 77 examples out of the total 1186 examples from the novella, which is not a huge number. But as a counterpoint, she wanted only appears 6 times. This makes me believe that women’s agency is understood to be much more of a conditional experience, to be granted by someone else, rather than something the women of The Awakening believed for or about themselves. In addition, some of these are negated (she would not, she would never), suggesting a desire to contradict or otherwise subvert the expected roles for women. We know that Edna is not a faithful wife, and I find the ability for women to construct their own fleeting sense of reality through the use of conditionals and hypothetical circumstances.

Looking more closely at these examples allows us to observe how they are used within the context of the story. For example, line 1154 in Figure 2, “it was the last place in the city where she would have expected to meet any one she knew” (Chopin, 104) is part of a constructed fantasy world where she can be left alone to her own ideas at her favourite café in the suburbs – until Robert comes crashing in to disrupt her:

The place was too modest to attract the attention of people of fashion, and so quiet as   to have escaped the notice of those in search of pleasure and dissipation. Edna had discovered it accidentally one day when the high-board gate stood ajar. She caught sight of a little green table, blotched with the checkered sunlight that filtered through the quivering leaves overhead. Within she had found the slumbering mulatresse, the drowsy cat, and a glass of milk which reminded her of the milk she had tasted in Iberville.
She often stopped there during her perambulations; sometimes taking a book with her, and sitting an hour or two under the trees when she found the place deserted. Once or twice she took a quiet dinner there alone, having instructed Celestine beforehand to prepare no dinner at home. It was the last place in the city where she would have expected to meet any one she knew.
Still she was not astonished when, as she was partaking of a modest dinner late in the afternoon, looking into an open book, stroking the cat, which had made friends with  her—she was not greatly astonished to see Robert come in at the tall garden gate.
“I am destined to see you only by accident,” she said, shoving the cat off the chair beside her. He was surprised, ill at ease, almost embarrassed at meeting her thus so unexpectedly. (Chapter 36

The fictionalized feminine space Edna constructs for herself serves a wholly maternal, comforting purpose. The milk she sips reminds her of her parents’ home in Iberville; the cat keeps her company in absence of any family members. Moreover, Chopin stresses that this particular café is miles away from home, without any of the trappings of her everyday experiences in city. Yet it is the interruption of Robert – a reminder of her usual life – which brings her back to her everyday reality. Edna immediately pushes the cat off the chair so he has somewhere to sit, rather than presenting a gulf between the two of them. Chopin presents this as a dichotomy between Edna’s fantasy life of social autonomy and her need to perform her role as polite, demur Mrs Pontellier. I suggest that it is through these conditionals – where Edna is allowed to imagine her life through other, fleeting means – that we are able to understand how she views ‘a free woman’ could perhaps manage exist more freely alongside the demands of motherhood and wifehood.

I’d like to conclude here by suggesting that simple frequencies and simple counting offer some new routes for thinking about The Awakening. In both examples, I have tried to model what quantitative methods have to offer someone who is very interested in one author or one particular narrative. A very astute reader may have noticed these features; what I have done here is no different than sitting down with a highlighter and identifying each individual use of the terms in question. However, it remains difficult to extract patterns this way. Computers, very good at these sorts of tasks, invite us to rethink our relationship to narratives. First, although the most resounding imagery of the novella is about the sea and Edna’s connection to it, we can see with the aid of simple frequencies and a little contextual information that this relationship really frames the story. Second, the ability to re-sort the novella by a specific term allows us to understand something which was previous not visible to the linear reader. Instead, this opens up the possibility for new discoveries and interpretations about the novella.

[1] As a standalone story, The Awakening is actually quite verbose. It is 49,663 words long; making it just over double the length of the average Shakespeare play.

Dr Heather Froehlich is the Digital Scholarship Fellow in Text Analysis and an Assistant Librarian at the Pennsylvania State University (University Park, PA, USA). She was awarded her PhD and MRes from the University of Strathclyde (Glasgow, UK), where she studied representations of social identity in Shakespeare and other Early Modern London plays. She is especially interested in how quantitative methods can lead to new readings and interpretations of different kinds of texts. You can find her on twitter as @heatherfro. View all posts by Heather Froehlich